In the circuit below what additions are needed so that charge will move from Ch to Ca, given that the charge on Ca can be higher that Ch?

In this system (see image below, it's a thought experiment for me at this stage), it is possible for the capacitance of the capacitor to dynamically change.

ps. this question is a simplification of an argument that occurred between two electrically inexperienced people, me being one of them. 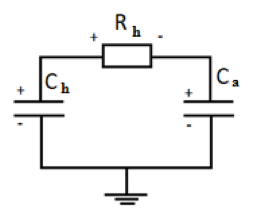 In order to move charge from a capacitor with lower voltage to another capacitor with higher voltage, you will need to add an energy source to the circuit. This is a passive circuit and the voltage will only tend towards equilibrium.

q = C⋅V, so to increase voltage, you need to decrease capacitance. So if you separate the plates of Ch enough, it should increase the voltage of Ch enough to drive charge into Ca. Note that you're still using an energy source, but it's mechanical now instead of electrical.

(This is actually the reason why people thought capacitors stored charge on the surface of the dielectric instead of on the plates. When they charge it and disassemble the plates, the voltage rises enough that the air breaks down and the charge gets deposited onto the dielectric.)

Translating to the hydraulic model you can see the voltage over the capacitor as a water level (water pressure is also used, but a higher water column gives a higher pressure, so that's OK). The capacitance is then the water capacity of the tank. If you would connect a full tank to an empty tank of the same capacity, both tanks will end half full, i.e. their water levels halved. Which agrees to half the voltage from the calculation.

Not the answer you're looking for? Browse other questions tagged capacitor charging or ask your own question.

13
Characterization of bypass capacitors
8
How safe are pre-charged supercaps compared to pre-charged batteries?
4
Chosing XTAL Capacitors for Microcontroller
3
Help understanding electron flow through coupling capacitor
2
Is there a reason why we don't use higher rated voltage capacitors?
11
Make energy out of a capacitor in the sea
7
Ceramic Capacitors vs DC Bias - Derating rule of thumb misleading?
2
Variable-Gap Capacitors in LTSpice