Which ground (digital or analog) measurement components should be connected to? 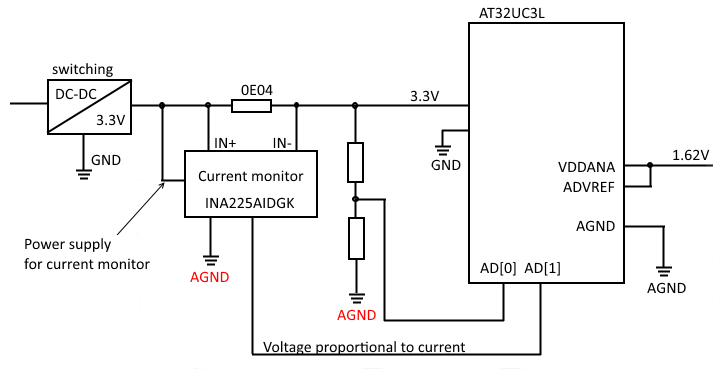 Good day,
I want to measure current and voltage of switching power supply that is on board together with ATMEL AT32UC3L microcontroller.

I think I understand how to measure - using resistor divider to lower voltage so it does not exceed ADVREF, and to use current monitor IC that will convert current across shunt resistor into proportional voltage.

Or there might be other solutions?
Thanx for advice.

Analog ground is just a way to subdivide grounding planes into isolated sections where you avoid having noisy digital return currents flowing through the current return for sensitive measurement stages.

Now in this simplified diagram V_MEAS is the voltage source that represents your analog measurement components, where V_DIGITAL represents the digital signalling. VM1 is the ADC on your microcontroller and VM2 is the digital communications section of the microcontroller. In this scenario since both V_MEAS and V_DIGITAL are referenced to the same "ground", but due to intrinsic resistances in the return path, the voltage measurement taken at VM1 and VM2 depends on the current through R1 at the time. If you have low current analog sources sharing a current return with noisy and relatively high current signals then noise becomes and issue

By separating grounds you are "decoupling" the analog and digital sections to avoid this effect, however both parts of the circuit should generally still be referenced to the same "0" voltage level so the grounds are usually tied together, the most convenient place to tie them together is directly at the ADC, but for more complex measurements set ups there are other options.

Generally you want to separate grounds to separate current return paths, but those grounds still will need to be referenced together in order to have circuits that function across different grounds. In order to avoid ground loops (more noise!) it is generally best to tie those grounds together at a single point and the ADC (microcontroller) is a good place to do so.

For more information a good place to start is This Analog Devices White Sheet. An example figure from this document illustrating the same issue is shown below. 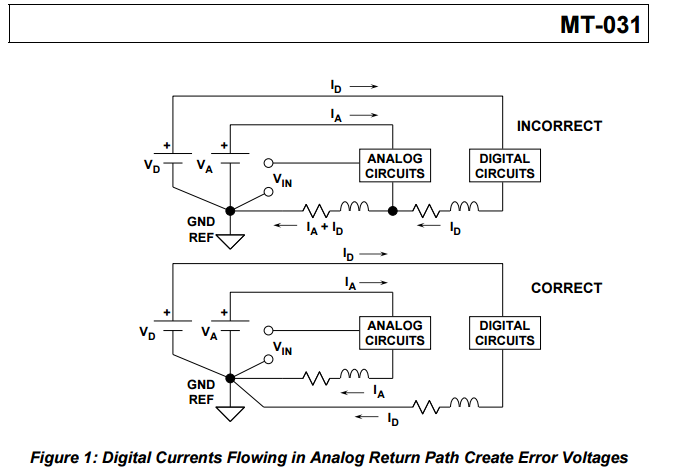 Not the answer you're looking for? Browse other questions tagged avr adc uc3 or ask your own question.

5
Measuring voltage/current digitally on two separate power supply rails
2
PIC analog to digital converter to measure more than one battery voltage (with different grounds)
3
Understanding CS5463's acquisition circuit
4
Can someone help me understand output impedance to an ADC?
2
Long term effect of over-voltage on clamping diodes and ADC reference voltage
1
Which one is the better way to feed analog input to my ADC?
2
grounding issues in a PCB
1
How would I measure current using current sense resistor at high voltages(-50 / +50V)
1
How to connect Aref (Avcc and Agnd) and where to place the bypass capacitor?
2
Using 3.3V or 2.5V for ADC and powering Op Amp from 3.3V or 5V