Why do linear voltage regulators have minimum output voltage > 0 V

I am trying to pick linear voltage regulator for my project (lab. power supply).

I am stunned, that only very few regulators claim to have output adjustable to 0 V. It seems to be due to the fact, that they generally use some sort of voltage reference connected in series with the ADJ pin. Simplified schematics, found in numerous data-sheets is in diagram bellow. 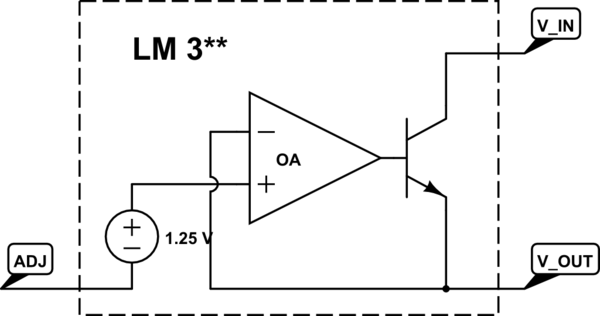 Now to the question...
What is the reason for having this voltage reference? (1.25 V in diagram above)

PS: This is my first question on this forum, please don't stone me right away :] I tried to search/google A LOT, but I am unsure what exactly am I looking for... many thanks for any helpful reply.

PPS: I am aware, that some regulators, such as LT3080 use current source instead of voltage reference, but this IC is supposedly adjustable to 0 V only for very small loads.

Secondly, 1.25V is a voltage both low enough that few (until very recently) actually need a supply that low (really, nobody cares about lab supplies), and high enough that the offset voltage of the internal op-amp does not affect the accuracy much. It also allows an internal circuit that does not have to work down to 0V.

Making a simple adjustable voltage regulator that works down to 0V would not be particularly difficult in any way but it would add cost and pins, and that's a non-starter for a jellybean part.

I'll add some more considerations to the excellent answer by Spehro Pefhany.

Voltage regulators manufacturers make a profit by selling their parts and modern electronic industry make profit mostly out of mass-produced goods, not out of hyper-specialized niche products.

Voltage regulators have a enormous success because they meet a common need in electronics: provide stable voltage supply to the circuits they feed. Most electronic apparatuses use more or less standardized voltage supply values: 1.8V, 2.5V, 3.3V and 5V for digital circuitry; 12V or 15V for higher power analog stages; 28V for power amplifiers, for example.

Therefore a manufacturer has an advantage in producing fixed voltage regulators. Of course having an adjustable regulator has its merits too: you can have a non-standard voltage supply rail, you may want to provide some way to trim the supply voltage, you may want to change the voltage dynamically to adapt to power requests in complex circuitry, etc.

The fact is that the "lab power supply use case" is almost meaningless for chip manufacturers: compare how many lab power supplies are sold each year to how many on board power regulators are built in the same period!

Moreover, any voltage under ~1.5V has little usage as a power rail voltage in current electronics (maybe in 10 years we will see a new successful logic family running at 0.5V, but till then, nope!), so there is no incentive to create adjustable regulator chips that regulate down to 0V (if this comes as part of the design, good, but it is nowhere a primary chip design goal).

Moreover a lab supply is almost never made out of just a single regulator: you need much more sophisticated circuitry (unless it is an hobbyist's toy) to reduce noise, to provide good transient response, avoid output overshoot, voltage and current limiting, etc., i.e. all those features that make a lab power supply worth having. Therefore there won't be a "supply on a chip" because every lab supply manufacturer will optimize their designs in different ways, and a "catch-all" chip won't be useful, or at least, won't be needed to be mass-produced.

I have nothing to add for the question asked in the title, but I do have a possible solution to your second/third points of how to overcome the 1.25V barrier. As you've probably realised, the voltage output of the LM317 is 1.25V greater than Vadj, thus you need a negative supply to pull Vout down to zero volts. I built a 5A dual supply a long time ago and got very good results until somebody dropped it when moving house. I have never got round to rebuilding it, but it was based around the circuit below. I have omitted the transformer/rectifying/smoothing components as they are nothing special in this case. The smoothed, unregulated DC supplies go to +VDC and -VDC. 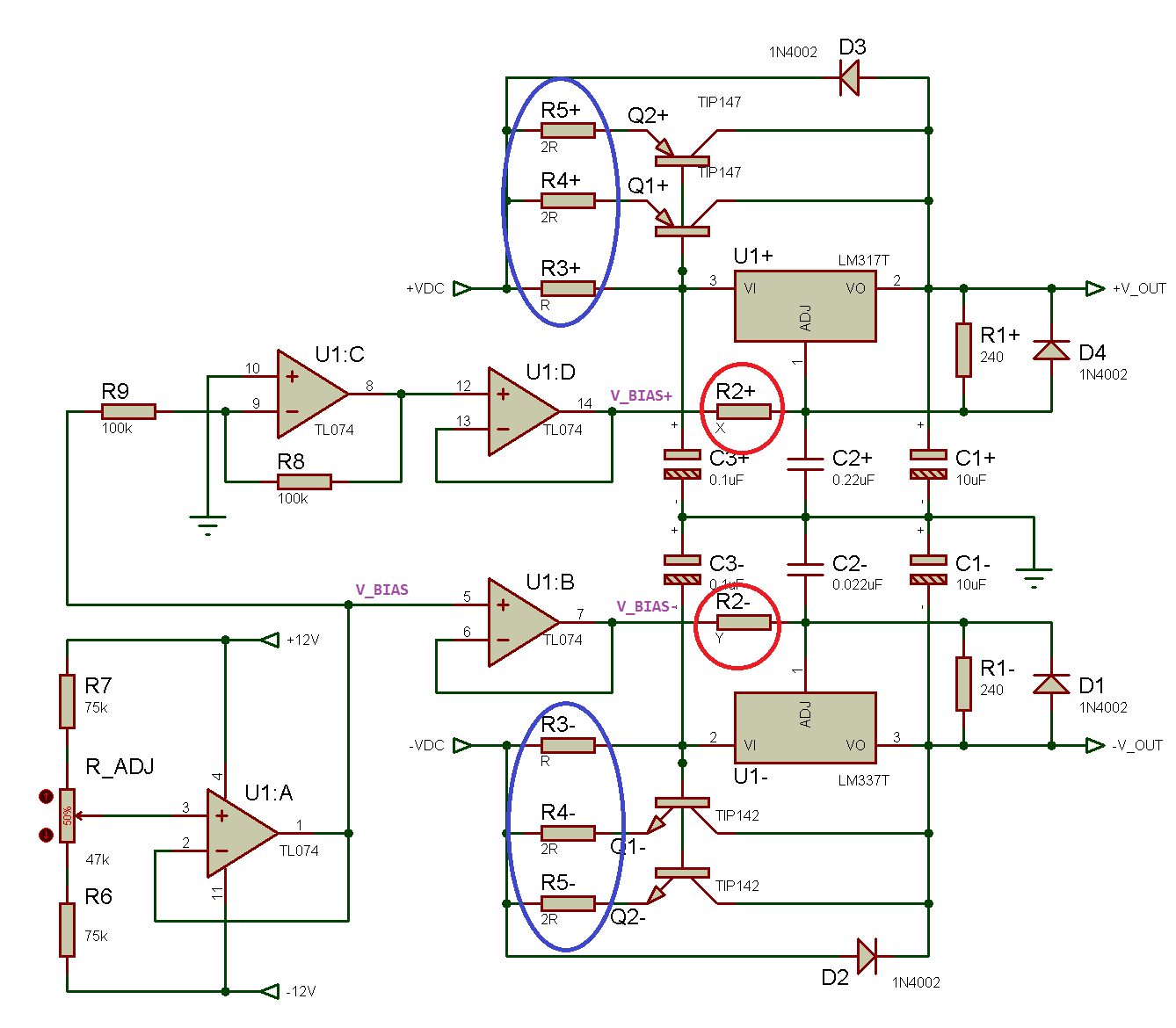 It uses a few more of your hard earned money coins by using op-amps to provide a stable Vadj, which in turn requires some sort of regulator to provide the +/- 12V supply for the TL074. Any regulator will do in this case, fixed or adjustable, over a fair range.

How it does the thing that it does:

Very simply. U1:A buffers the voltage split through the variable resistor R_ADJ. U1:C inverts this so that U1:D and U1:B end up with equal but opposite voltages at their non-inverting inputs. D and B are essential for providing a stable, high-impedance for R2+/- (circled in red).

[If you want to have separate +ve and -ve voltages connect U1:B+ to its own voltage divider, and leave U1:Aout going only to R9.]

The two R2 resistors pair with their respective R1 resistors and adhere to the standard Vout equation plastered about the datasheets for this regulator and its cousins, except you then subtract the voltage V_BIAS+ (or add the voltage at V_BIAS-) to get the actual Vout. It's up to you to choose values of R2+ and R2- - and also R6, R7 and R_ADJ - to give you acceptable voltage swings. Note that the R2 values will not be the match due to the current Iadj, which differs slightly from one IC to the next, but definitely from the LM317 to the LM337. For the most part, the relationship between Vadj and Iadj is linear (from experience), but things change a little when you start to draw significant current in the load - hence:

Q1/2 and R3-5 (circled in blue) do the donkey work when it comes to the current. However, this relies on careful choice of values for the resistors. Note: "2R" and "R" do not mean "2 Ohm" and "1 Ohm" respectively; they refer to one being double the resistance of the other. This topic is covered in several versions of the datasheets for these regulators and online, so I shall not reiterate it here. Ultimately the goal is to divert as much current away from the regulator as possible and force it through as many transistors as you need, but you will have to determine the best values for your own needs.

Do not attempt to draw too much current at lower voltages - this means much higher power dissipation from the ICs and much higher temperatures. If +VDC is 18V, +V_out is 3.3V, and +Iout is 3Amps, you'll have 44 Watts+ being turned into heat. I believe that pushes a modestly-heatsinked pair of TIP147s to burning point.

Not the answer you're looking for? Browse other questions tagged power-supply control linear-regulator or ask your own question.