Why are decibels used for Bode plots? [closed]

I don't get why Bode plot has to be in dB because it is a unit that I almost never work with in electrical engineering. I'd expect someone to know dB if he worked in audio repairs or as a salesperson working for some radio electronic company. Why can't we use power (watts), voltage (V) or current (A) instead of this terribly meaningless unit?

Does anyone know what a Bode plot would look like if it wasn't in dB?

Bode plots show gain and phase. Gain is measured in V/V, A/A, or W/W, and is thus dimensionless. Decibels are ratios, like percentages or parts per million. The question, then, is why we sometimes use logarithmic scales instead of linear ones for gain. (Phase is always linear!)

One reason is that in graphs, linear scales really only work over about one to two orders of magnitude (factors of ten). A linear scale that can show a gain of 100 will not do a good job of showing the difference between 0.10 and 0.05. A logarithmic scale will. The graph below shows an example -- an amplifier with a gain of 100 and a band-pass filter with cutoffs at ~10 Hz and 1000 Hz, perhaps for low-frequency audio: 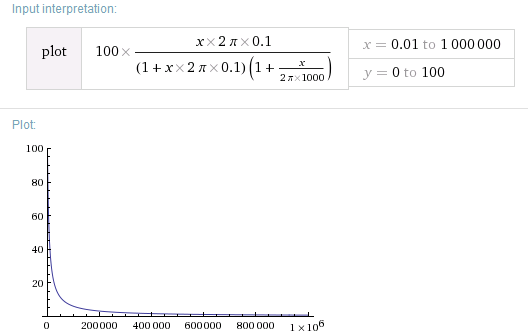 Pretty useless, huh? Well, I did run it out to 1 MHz. :-) But if I zoom in, it's not much better. Notice how the lower cutoff is squished into the left side of the graph: 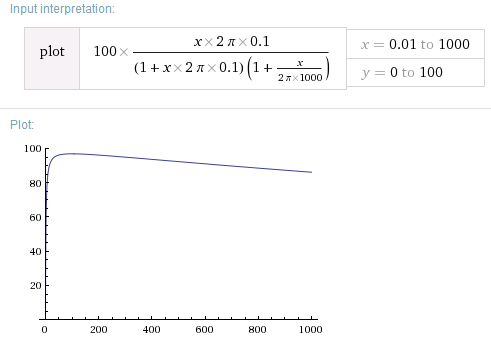 Here's the same system with a log-linear scale: 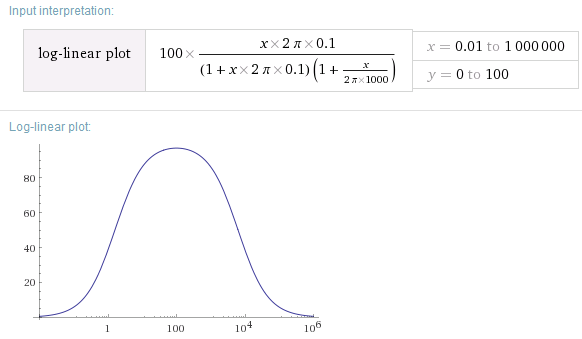 Much better! But there's still some information missing. At what frequencies does the gain drop below 1? (This is important for stability.) The log-log graph shows this more clearly: 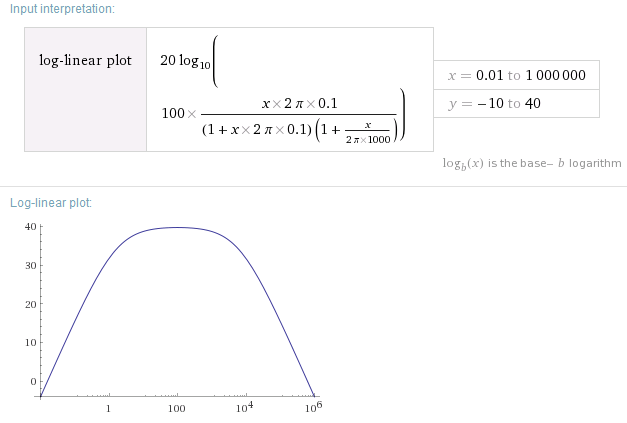 (It says lin-log because I had to do the decibel conversion in the formula. Also, I messed up the formula, so the lower cutoff isn't exactly 10 Hz. Again, much easier to see with a log-log plot. :-) )

As you probably know, it's easy to sketch an approximation of this graph by hand without doing any calculation at all.

Another reason people like logarithms is that they have a very useful property:

Historically, this was very useful for doing multiplication by hand -- look up the logarithms of your numbers, add them, then convert back! There's a special tool called a slide rule to help with this, and every engineer used to own one.

With the advent of pocket calculators, we no longer need to do arithmetic by hand. But logarithmic ratios are still useful for mental math. For example, let's say you have two cascaded low-pass filter stages. At a frequency of interest, one filter's gain is -43 dB and the other's is -25 dB. Immediately, you know the total gain is: 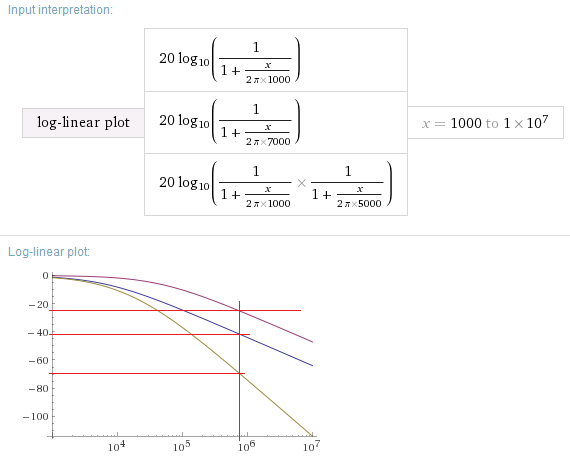 Not as easy to understand, and good luck noticing if you entered one of the numbers wrong. The graphical version is totally useless even when I zoom in on the frequency scale: 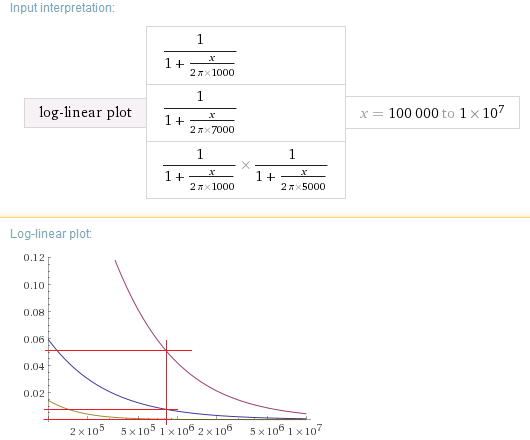 Hopefully these examples give you an idea of why logarithmic scales are widely used. I took an online class in switching power converters last year, and the professors were using Bode plots to get quick information about the responses of systems that would take forever to analyze with formulas. It's not just an old calculation trick; there's real insight to be gained from using decibels!

A first order filter has a roll-off of 20dB per decade. That is, every time the frequency increases/decreases (for high/low pass filter) by a factor of 10, the signal power drops by a factor of 100.

The corner frequency of a filter (the 'nominal' filter frequency) is where the output power drops by half, or -3dB.

Here's a plot I made you in Matlab. See which plot gives you more useful information. 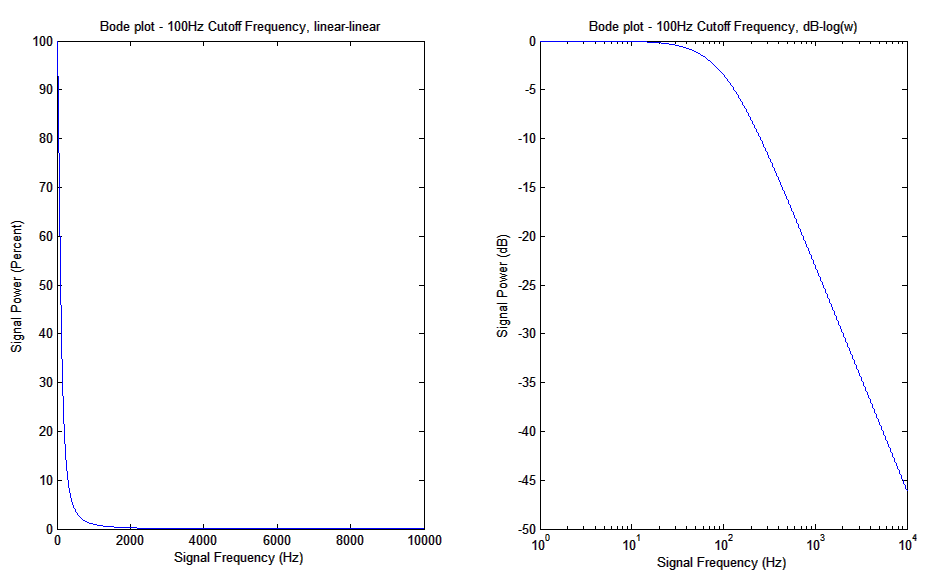 So, which of these plots lets you "read off" the corner frequency? Which tells you the filter order? The decibel unit, for Bode plots, gives output power in a readable format - I know I don't get much from the plot on the left, and I doubt you do either.

As Spehro pointed out in the comments on your question, you get the same plot if you use a log-log graph. These plots are useful for control theory, system identification, filter design, etc. because again, they display results in a legible format.

It's also the same reason why you may typically want to view FFT results in a dB format - your signal might be at -60dB where the noise floor is -100dB - BOTH of those values would appear to be basically zero on a linear plot. For the FFT example, your signal power would be 40dB = 10^4 = 10,000 times larger than the noise floor, but still -60dB = 10^-6 = 1 millionth of the power of the total signal power.

Likewise a system might have (desired or undesired) resonance at a given frequency, but that resonance may not appear on a linear plot. The system could be a structure you're analyzing/identifying (vibration harmonics in a bridge, say) or it could be a control system you're designing (resonant frequency in a vehicle suspension system?) - You need to know where the resonant frequencies in those systems are because, depending on the range of frequencies covered by said resonance, they may or may not be able to be excited during normal operation.

So, in summary, the dB scale is not useless or "terribly meaningless", it's a way to evenly expand/"blow up" data axes such that you can discern large relative changes in magnitude where absolute changes may be very small.

Do you really think that a "terribly meaningless unit" would be used with enormous success over many decades? Are you not a bit curious if this "meaningless" unit has perhaps some advantages? here are some of them:

1.) Because of the log-log display (resp. dB-log) we have the chance to see the relation gain versus frequency over a much larger range if compared with "normal" linear axis.

3.) Most important: Drawing the BODE diagram for the loop gain function (system with feedback) we can evaluate the stability properties of the system if the loop is closed. There a stability criteria derived from the Nyquist stability criterion. In this context, it is possible to derive stability margins (safety margin against instability).

4.) Based on thiese properties it is relatively easy to derive from the BODE diagram informations about additional actions to be taken for stability improvement (compensation elements or blocks).

All this is possible only because the gain is expressed in log units (dB).

The decibel (dB) is a logarithmic unit that expresses the ratio of two values of a physical quantity.-wikipedia

Hence what will the magnitude response look like in not a dB graph actually it will be depend upon the interval you take on the frequency axis like 1-100Hz or 1-1KHz but to say that for a system second order system there is hardly a change over +30 -40 Hz hence if drawn using small period your magnitude response will look as a straight line.

0
Obtaining stability information from Bode plots
16
What are some insights from looking at Bode plots
0
Understanding s-domain poles, negative frequencies and bode plots
11
Practical ways to obtain Bode plots for an unknown circuit
1
What form for Transfer Functions to use for filters and Bode plots?
0
Bode Plots - Absolute Value of Complex Function in Magnitude calculation
0
Bode diagram for RL circuit
0
How to determine the transform function of certain bode plots?
0
Bode Plots and Electrical Circuits - Zeroes and Poles