I'm trying to make a circuit where closing a switch will change a GPIO from low to high, and I want to minimize current as much as possible to increase battery life. The chip I will be using is Nordic Semiconductors nRF51422 (https://www.nordicsemi.com/eng/Products/ANT/nRF51422).

My understanding of pull up and pull down resistors is that they limit current, protecting the chip and decreasing power usage, while still keeping the GPIO either pulled up or pulled down. Having too large of a pull up/down resistor increases the time constant of the circuit making transitions from high to low slower and 'pushes' the GPIO out of the range where it is recognized high or low.

The exact set up I was envisioning was this. I use a very large pull down resistor (on the order of mega Ohms). The voltage drop across this resistor will be so large that it will essentially behave as a pull up resistor with the added benefit of exceptionally small power usage. I then have a switch that when closed connects the GPIO to ground across the recommended size resistor (13 kOhms). The circuit diagram would then resemble a GPIO connected to ground across two parallel resistors, one very large and one much smaller, which will behave like a single smaller resistor Thus, when the switch is closed the digital value of the GPIO changes from high to low, and when open there is only a small trickle of current which saves battery life immensely.

Would that work? In particular, does my idea with the large resistor even make sense?

I'm gonna rephrase my question and add a schematic.

I've made a schematic that illustrates what I'm thinking by simplifying the GPIO as a black box resistor. Schematic

Would this work? Is my schematic just straight up wrong?

Thus, when the switch is closed the digital value of the GPIO changes from high to low, and when open there is only a small trickle of current which saves battery life immensely.

You have the wrong idea. A pull up should not result in much current aside from the leak current of the gpio

In the first picture, a pull up pulls the GPIO IN high. The only current is the leakage current required to measure the voltage input level. This is a few nA, a fraction of a milliamp. This can most often be checked as Input Logic High/Low (ILH, ILL) in a datasheet but I can't find it in your product. Assume 10nA or less on average.

The exact set up I was envisioning was this. I use a very large pull down resistor (on the order of mega Ohms). The voltage drop across this resistor will be so large that it will essentially behave as a pull up resistor

This doesn't make a lot of sense. If you hook the resistor from the pin to ground it's a pulldown. The voltage at the pin is the same as gnd. By ohm's law, there is very little voltage drop across the resistor because such a small amount of current flows.

A typical configuration is shown below.

I don't really understand your idea, to be honest. It sounds like you're trying to have a big resistor that's both a pull up and a pull down, then connect a smaller parallel with a switch? I'd need a schematic to comment further, but you really only need the standard pull up or pull down configuration. For a pull up, swap the position of the resistor and button. 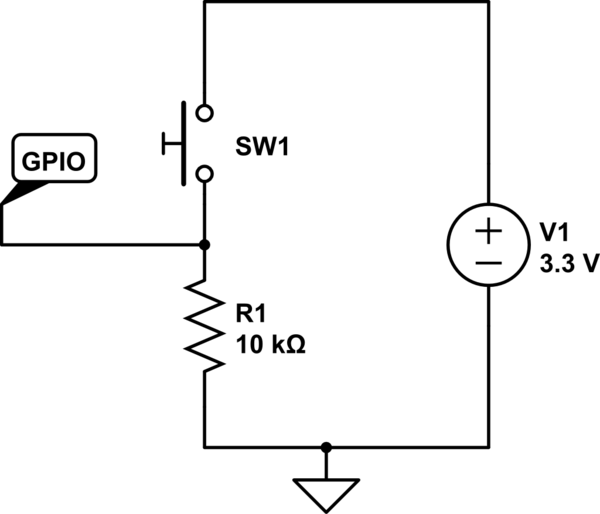 Not the answer you're looking for? Browse other questions tagged microcontroller switches gpio or ask your own question.