Why do all digital signals have infinite bandwidth?

For periodic digital signals, there could still be a number of digital cycles per second, couldn't there? Then how is there a maximum and minimum frequency when the number of cycles per second is always constant throughout? Bandwidth would then be BW = Max_Freq - Min_Freq = 0.

For non-periodic digital signals, there may not be a fixed number of cycles per second, so there is a maximum and minimum frequency. But still, the bandwidth is not infinite, is it?

In both cases, how is the bandwidth infinite?

An ideal digital signal has infinitely steep edges. We can compose this signal from sines, one fundamental and a number of harmonics. 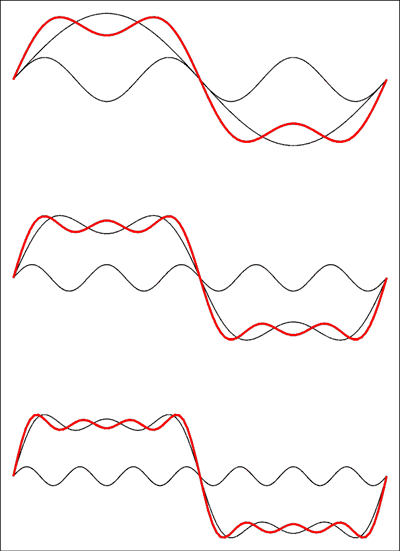 Neither of those separate sines has infinite steepness. The only way to get our steep edge is by adding an infinite number of harmonics.

A true square wave has a vertical line for its face.

That is, an increase from Vmin to Vmax in zero seconds.

Anything (except zero) divided by zero is infinity.

In reality it takes time for the voltage to rise from Vmin to Vmax, and so there is a finite limit to the bandwidth.

What you're confusing is the signal frequency, or period. The speed of high and low pulses is not the bandwidth of the signal, but the speed of the data communication.

In practice, chips neither produce perfect digital signals on their outputs nor require them on their inputs. Examination of an output signal on a good enough scope will typically reveal that it is a little bit "smoothed off", and most chips will tolerate having input signals which are substantially "smoothed off", provided that they don't linger or bounce around in the region between 1/4 and 3/4 VDD. Indeed, some chips are designed to deliberately smooth off their output waveforms (sometimes by a programmable amount) and/or accept inputs which are smoothed off even to the point of being a bit "mushy".

It's worth noting that while something like a 1 Hz perfect square wave might be expressed as the sum of continuous sine waves ranging from 1 Hz to 1 MHz and beyond, it is very unlikely that any apparatus which is designed for receiving a 1 MHz signal would perceive a 1 Hz square wave as having a continuous 1 MHz component. The 1 Hz square wave would contain, among other things, a 999,999 Hz component whose strength was 1/999,999 of the fundamental, and a 1,000,001 Hz component whose strength was 1/1,000,001 of the fundamental. The apparatus that was trying to receive a "1 MHz" signal would detect those components, and many others, to varying degrees; during each one-second interval, there would be times when they would all be in phase, and times when about half would be in phase and half out. The apparatus would thus perceive a variable amount of "1 MHz" signal--most likely detecting a substantial amount near the moments when the input was switching (because all of the detected waves would be in phase), and a much smaller amount at other times (because the detected waves would have a mixture of phases). A really sharp 1 Hz square wave, driving a strong antenna, would thus not cause continuous interference on a 1 MHz transmission, but rather would yield a 2 Hz "tick tick tick".

All electrical signals (analog or digital) have infinite harmonic bandwidth. It is the operating circuit that physically restricts the signal bandwidth.

The other losses will occur when changing an analog signal to digital and the reverse. But this is considered a media change losses due to converting voltage thresholds into a digital number and then back to a analog signal.

Not the answer you're looking for? Browse other questions tagged frequency signal data bandwidth or ask your own question.

5
Why Periodic Signals has only integer frequencies but non-periodic does not?
2
Where should an increase in harmonic frequencies go in the Nyquist formula?
4
Required Bandwidth for ASK
12
Why is channel capacity a factor of bandwidth instead of frequency?
9
Why does more bandwidth mean higher bit rate in digital transmission?
2
Signal rate, data rate and bandwidth in digital signals
5
SPI communication - bits per second vs Hz
3
Why is "throughput" called "bandwidth"?