Are Wire Current Ratings Different in AC than in DC?

Lets say I have a 1.5 mm^2 wire (between 14 and 15 AWG) and I have to use it in two different circuits, will the current carrying capacity of the wire change? One circuit is 240V AC and the other is for a 12V DC application.

Well you didn't specify the frequency of the AC and I know you probably meant 50 or 60 Hz but there is such a phenomena as skin effect. As frequency rises the electrons tend to congregate in the outer skin of the conductor with very little conduction taking place along the centre section. This means that the wire's electrical resistance rises because the cross sectional area of the copper wire is under-utilized.

See this wiki article for skin effect. Also note that there is also a phenomena called proximity effect and this is very similar to skin effect but for parallel cables carrying the same current.

Here's a pretty graph of skin effect depth versus frequency: - 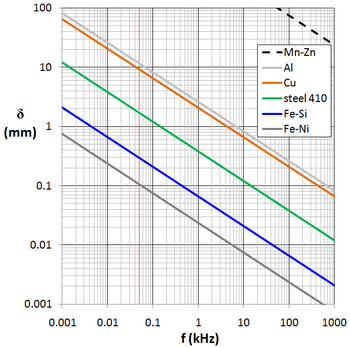 At 50Hz, (red vertical line in graph), copper has a skin depth of about 10mm and this means that if you are trying to pass really large currents (and calculate that you need a copper wire of 40mm diameter), the middle 20mm is under-utilized and the cable may overheat a tad.

At 1kHz a copper conductor's skin depth is only 2mm. At 1MHz the depth is below 0.1mm. This is why circuits that use high frequency ac tend to adopt a "litz" wire approach. Litz wire 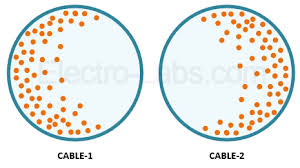 Two conductors carrying current in the same direction create magnetic fields which force the electrons in each conductor to occupy the the most distant areas of each respective cable.

The answer is no, the "current rating" of wire is not difference for AC and DC though 240V AC circuits would commonly fall under the domain of regulatory codes, such as the National Electrical Code in the US, which do dictate current ratings, 12V DC applications typically would not. The actual current capacity, whether AC or DC is different for solid vs stranded and stranded wire can be either standard or fine strand with fine strand having the highest current carrying capacity for a given gauge and solid wire having the least. The rating is also dependent on the jacket material. For example, identical 12 gauge wire with a TW jacket is "rated" for 25 amps but with a THHN jacket the rating is 30 amps. Obviously there are other factors to consider when sizing wire but I think this answers OP question.

Unfortunately what is not discussed here is the temperature rating of the wire insulation and how it is applied to determine wire ampacity. If the terminals of the equipment being connected are only rated for 75degC wire, then the ampacity of the wire must be taken from the 75degC table no matter whether it is rated 75degC or 90degC. In addition NEC 240.4.D states the maximum overcurrent protection for various sizes of wire notwithstanding the ampacity shown in the table. So, no matter what, a #12 AWG Copper wire cannot be used on a circuit protected by anything larger than a 20 circuit breaker.

Yes, it will be changed. Assuming that you have a load of 300 W:

Not the answer you're looking for? Browse other questions tagged current wire capacity or ask your own question.