A current controller by regulating the voltage

I need some idea of what type of controller I should use. But, I am thinking of a PID controller.

Here is my problem:

In this circuit, the resistor R is time variance. My goal is to have a desired current amplitude to be generated through this circuit. My idea is to control the voltage source via a PID controller do you think it is possible? Do you have any other suggestion?

The load characteristic over a wide range of voltage looks like this: 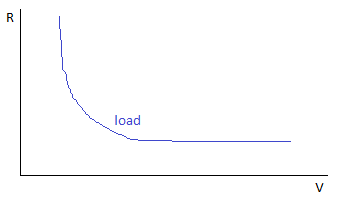 You can certainly close such a loop digitally, but the performance (response time including correction from disturbances such as fast changes in R) will likely be very much inferior to having a good DAC and an analog closed loop.

Anyway, if you deliberately (in analog or digital form) insert a dominant lag that is much longer than the sample time, you can use ordinary PID tuning rules. Suppose your sample frequency is 1kHz and your ADC and DAC respond almost instantly, then you might want a 10Hz cutoff low pass filter on the output.

On the other hand, if the load really looks like a (very linear) R, and if the sample rate is low and the ADC settles completely during each sample time you could simply calculate the estimated R' as Vout/Imeasured and calculate the new V from the estimated R, perhaps with a bit of integral action. This won't work over a wide range if the load is something very nonlinear like an LED, and other precautions would probably be necessary to prevent damaging such a load by overshoot.

I had very good luck with a 2 op amp circuit similar to the one in Figure 10 from here: 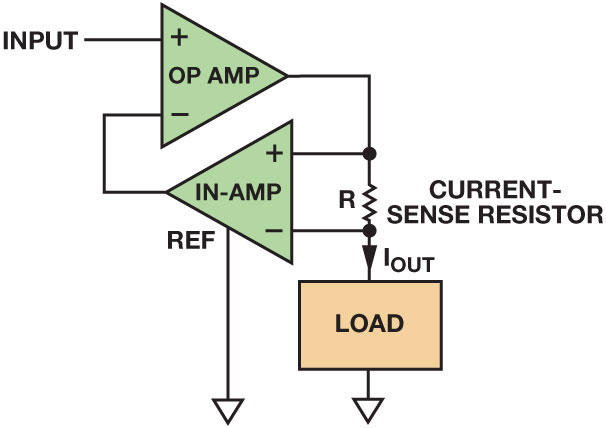 I had a few additional resistors. The current was multiplexed among PLTs sequentially to measure temperature at different points on the system.

Not the answer you're looking for? Browse other questions tagged analog control-system pid-controller or ask your own question.

3
Astrom-Hagglund Relay PID tuning - relay transfer function?
0
control 2 outputs with a single input and pid
0
PID controller quickly drops command signal and quickly rises it when initially given control?
2
Voltage shifting and dividing
0
how do I control duty cycle of a MOSFET using PI controller
1
Implementing the I action in an analog PID controller
0
Measuring the minimum voltage square wave