Experiment 12 from my beginners book Make: More electronics is instructing me to build the following circuit..... I apologize for posting the whole circuit when my question has to do with just a small part of the circuit but I felt that if I didn’t post the whole circuit I would not be able to provide the whole context of my question.

In case it helps with the process of understanding the circuit below, the circuit is supposed to function as a microphone amplifier consisting of a pre-amplifier (LM741) and a power amplifier (LM386): 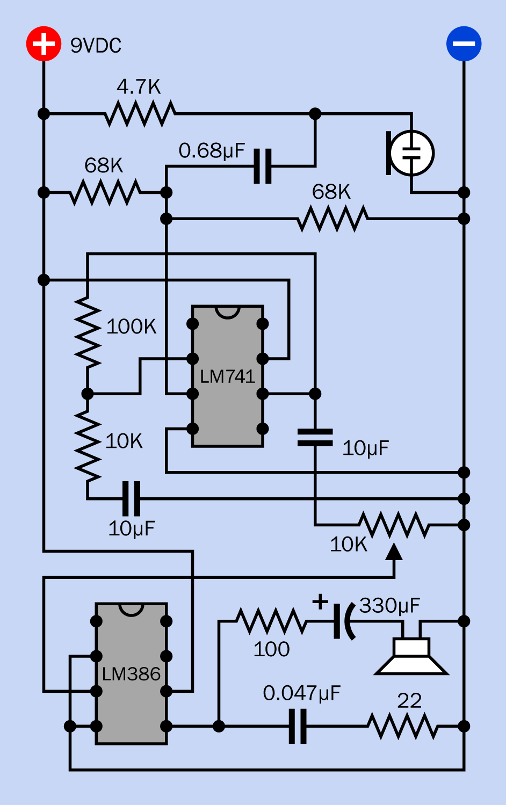 My question has to do with the 10 microfarad capacitor connected to the output of the LM741. The way I see it is that there are two scenarios occurring in this capacitor.

Scenario 1: When the LM741 output voltage goes from a set value to a more positive value electrons flow into the LM741 energizing the capacitor as show in the image below: 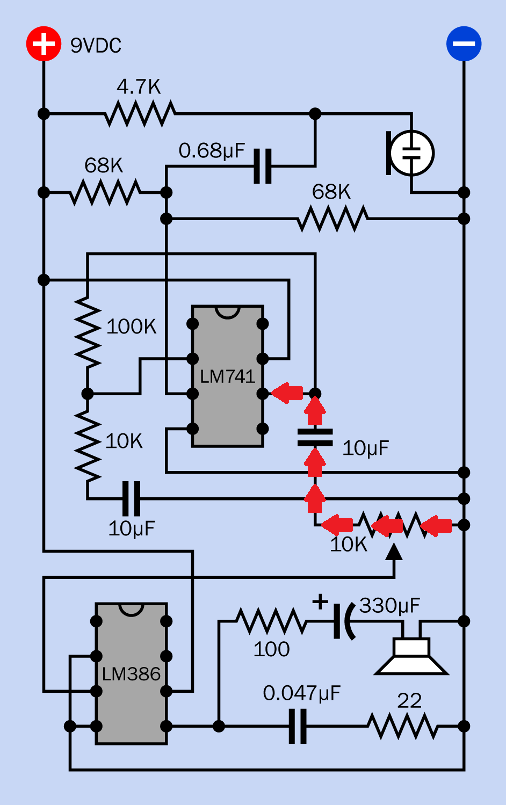 Scenario 2: When the LM741 output voltage goes from a set value to a more negative value electrons flow out of the LM741 de-energizing the capacitor as shown it the image below: 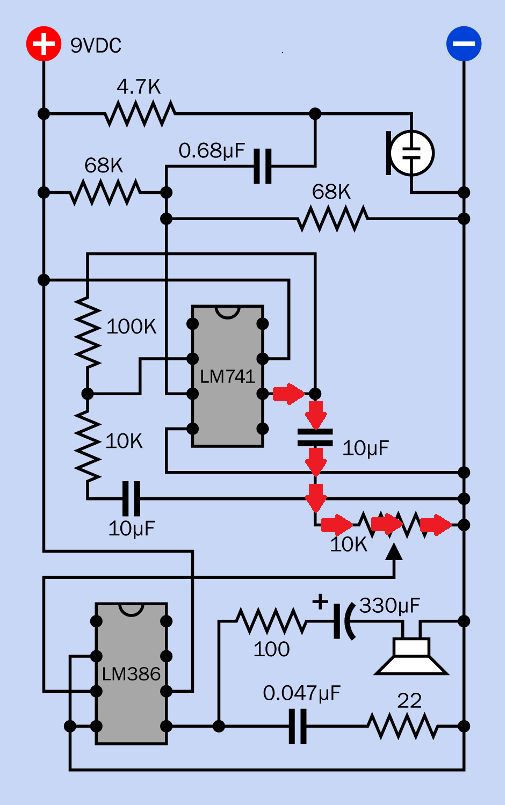 I think I am ok with Scenario 1 since it makes sense in my head (given my current level of understanding) that electrons will happily move to a point of higher potential.

However, Scenario 2 has me very confused because I don’t see how that works. The reasons I say this is because I don’t see where the electrons go as they are being pushed out of the coupling capacitor. The way I see it is that they can’t go to the negative terminal because there is no potential difference to make them want to go that way. So it looks to me like they are pushed through other wires connected to the negative terminal but that would cause all kinds of unexpected issues right?

Could someone please help me get a better grip on what is actually happening with this 10 microfarad capacitor as the output voltage of the LM741 swings up and down?

Scenario 1: When the LM741 output voltage goes from a set value to a more positive value electrons flow into the LM741 energizing the capacitor as show in the image below:

This is not correct. The capacitor has already been 'energized' (charged up to half the supply voltage) by the op-amp's steady state output voltage. When a signal causes the op-amp output to go up or down the capacitor remains charged to half the supply voltage. It passes the signal through to the volume control by maintaining a fixed voltage between its terminals. Since the DC voltage at the pot is zero volts, at this point the signal will go above and below ground.

The capacitor is only able to pass the AC signal through because it does not become energized and de-energized as the signal goes up and down. As the frequency is lowered however, the capacitor will indeed start to charge and discharge, reducing the output signal level. 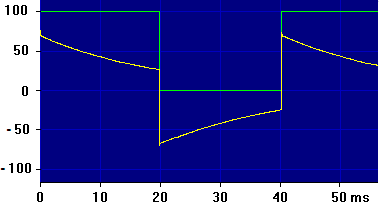 This scenario can be confusing until you examine it from an op-amp perspective. Op-amps sole desire is to balance the voltage on their input pins (how they physically achieve this should be ignored at this point). So we exploit this property through feedback from the output to an input (usually negative feedback). Because the Op-amp can only control it's output it "drives" the output in one direction or the other to achieve this balance. (However it can only go as high or low as the rail ,+Vcc -Vdd or somewhere close to them. ie the output is not unlimited).

So in your case take a look at the datasheet of your op-amps and work out what the inputs/outputs are and do a schematic of these. I think you will get a different perspective on what is driving the circuit.

You must first understand, that electrons don't cross the capacitor, this is why there is dielectric inside. They gather on on electrode, creating electric field inside the cap, and this way pushpin elenctrons on the other side. There always are electrodes there, because electrode is made of metal. So what it means is that only the "change of number of electrons on an electrode" is visible on the other side.

By the way, the Kirhoff's currents law still works, as there is "displacement current" inside the capacitor, which is fact is the change of electric field.

No, in scenario 2 there is a potential difference because for scnenario 2 the capacitor must be charged up and itself temporarily acting like a battery.

Not the answer you're looking for? Browse other questions tagged capacitor coupling or ask your own question.

5
Distribution of electrons in a capacitor charge circuit?
1
Problem understanding the operations of capacitor
2
understanding constant current source circuit
0
Why does a circuit need to be closed for a capacitor to develop voltage?
2
Using a higher C than necessary in a voltage regulator circuit
2
Confusion about current flow
0
Why doesn’t voltage drop to 0 when a capacitor becomes fully charged?
0
Negative Voltage Output From Capacitor
0
Electrons inside an LC Circuit