Can I connect a MOSFET to an Arduino directly?

I have the following electromagnet and plan on connecting it to the following MOSFET which will be controlled by an Arduino (I'm thinking analogue or PWM). Do I need any other parts (resistors etc.) I'm sorry about the vague question but I don't know much about electronics at all and am just starting. By the way, the aim is to be able to control the strength of the electromagnet (12v 300mA-1A) using the Arduino easily.

You can connect a MOSFET directly, even without a resistor if you like (though it's not nice to put such a heavy load on the output), but if the MOSFET fails with a Drain-Gate short your Arduino will be scrap. I strongly suggest using a higher voltage MOSFET than that one- it's only 12V and you will at least be subjecting it to at least 12.5-13V when the MOSFET turns off. It does have nice specs at 4.5V drive (good for an ampere or two), but Vds breakdown is too low.

If you want a modicum of protection, (Edit: Assuming 5V Arduino) put a 5.1V zener on the Arduino output and a 200 ohm metal film resistor to the gate. Put 10K across the 5.1V zener as well so if the output goes open it won't partly turn on.

You must put a catch diode across the coil. Something like a 1N5819 would be good. Otherwise the MOSFET will get very hot and may fail very quickly.

Edit: You should make sure the MOSFET you select is capable of handling the full current of the solenoid (1A you say). 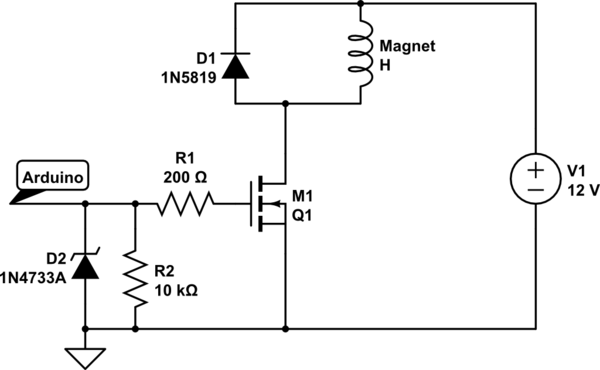 Not the answer you're looking for? Browse other questions tagged arduino microcontroller transistors mosfet resistors or ask your own question.

3
Controlling an electromagnet with Arduino
5
How can I electronically sense the state of an LED in another device with an Arduino?
4
MOSFET on Arduino Uno
1
Arduino PWM control MOSFET
0
Smoothing PWM from Mosfet
0
Control LED strip with MOSFET and PWM Arduino
0
Regulate 12v flow with a mosfet
0
Arduino Fan Control: BJT vs MOSFET
0
Designing a Peristaltic Pump Driver with IRFZ44n Mosfet
0
MOSFET: Cannot control gate signal using Arduino PWM