Powering multiple devices from a single supply with 48V

First of all I asked this question in DIY.stackexchange.com, because of the cabling in the house. Here I would like to ask about the electronics (or electrical) part of it.

And there is a very similar question here: Powering multiple devices from a single power supply

Yet there are some differences. First of all I was thinking to use 48V to transfer energy from a single power DC adapter, which I would like to place next to the main ethernet switch. Then I want to make a simple board, where I will split 48V DC output to 4-6 parallel wires. I would like to wrap these wires around Cat6 cables with tape (Cat6, because price it much higher for 50m cable, it is a good investment for the future and I don't want to replace these soon) and pull these combined cables through the walls (by replacing currently existing phone line or cable TV both of which I am not going to need).

My goal is here to provide 3 rooms with a pair of ethernet. One for personal computer or TV and the other one for a Raspberry Pi, which would run either as media center or security camera.

Since, I am enthusiastic about electronics, I thought I might try to do something on my own and learn more about it. So a single 48V power supply and wires around Cat6 around the house would solve my problem. Then I can solder my own small voltage regulator board. Which is even better, because I would like to attach infra red LEDs to my security cams, which will draw additional energy. My understanding is to feed them extra, since Raspberry Pi has a limited output energy. I can create the board in a way that the LEDs are controlled with a transistor (MOSFET?) and are fed with an extra voltage regulator (6V or something).

I know there are many aspects in this problem and I could split into different questions, but my original problem is to feed Raspberry Pi's with less adapters/cables as possible and with least costs. Is this possible at all? Do you think, this would be the optimal solution? Are there simpler ways to power my Raspberry Pis? 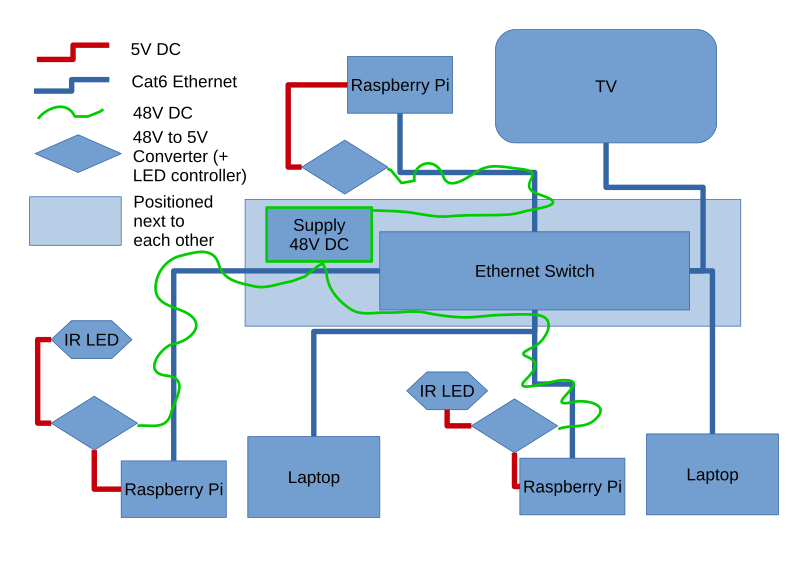 Remember to have rational size fuses at the supply end of your power cables to protect against fire due to shorts in the walls. Use the thickest wire for the power pair that you can afford and draw through the walls with ease to minimise losses.

You could use a second Cat6 cable for the power and use two pairs for ground and two pairs for +48V but it will still be less copper than a dedicated pair of the same overall size.

EDIT:
As clarified by Golanz in the comments above the voltage converters should be of the switching type and not simple linear regulators so the current in the 48V link is reduced, a linear regulator would dissipate lots of energy as heat in the regulator and cause totally unnecessary load on the power supply and wiring by the same amount. Finding linear regulators with a 48V input for 5V output would be harder these days anyway and only appropriate for rare analogue applications.

The obvious question would be why? as a general rule the more conversion steops you have in your power chain the less efficient it will be. Lower voltage systems also suffer from greater resistive losses.

So unless you are planning to build in some form of backup power or you have reason not to want to run mains to the location of your adaptors it would seem far more sensible to just power the devices off local mains adaptors.

Not the answer you're looking for?Browse other questions tagged power-supply raspberry-pi network cable-assemblies poe or ask your own question.