I'm using Arduino to log the discharge curve of a 5V battery pack (usb type for smartphone recharging). Using Arduino I read the voltage every second and I save it to a log file. Arduino is powered by an external source, the battery pack is connected to a 4.8 ohm resistive load to have about 1 ampere of draining.

I'm using the volt divider because arduino Analog pin has 0-5v range, so I read 2.5V and then I multiply it by two. 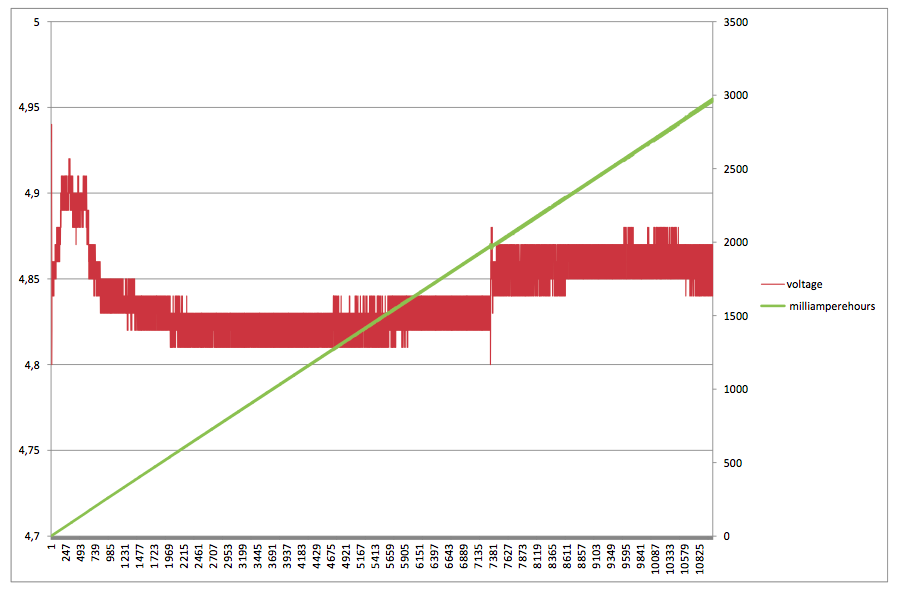 But I have an issue: as you can see the discharge curve go up, and down, and up again and then it stop with a value that is high. I check the battery and is empty, but I don't know how I obtain this discharge curve instead of something like this: 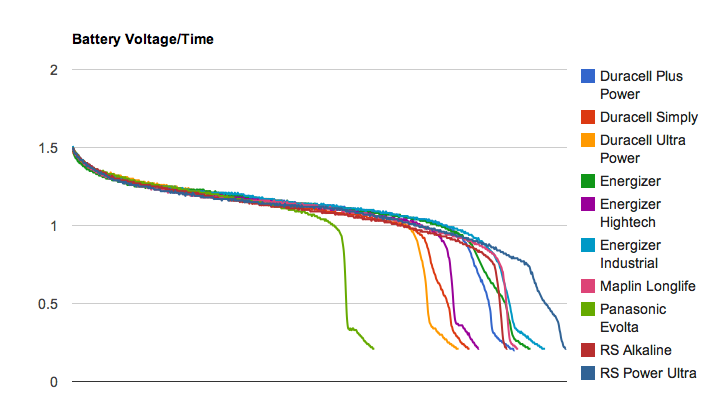 There are many reasons why your voltage would go up. As suggested by @jippie it can be heating in the boost converter in the pack. It can also just as easily be heating in your resistors, causing them to increase resistance and as such reduce drained current.

As @NickAlexeev suggests, if you are writing this for a mass-read publication you need to take this seriously or not do it at all. You will either mislead a large group of people with your findings or be quickly debunked by any one of "us professional EE engineers" living in your country. Best case scenario it's all wasted effort, worst case you're helping the world to yet more misunderstandings about EE and batteries and there are already way too many.

Once you've done all that, if your time also happens to cost something, you are going to have spent much, much more in materials, tests and research than the $199 for the battery tester that Nick linked in a comment, so you may as well go for that.

And you need to, but this is when you buy the tester as well:

As mentioned by many other posters, a voltage regulator in the recharging device is probably the cause for your odd discharge curve. That said, I had several comments regarding your methods that are too long to fit in a comment.

I would caution against your method of testing for two reasons:

If you are "willy-nilly" discharging these batteries at 1 amp then you could absolutely going to find that some batteries are dramatically over/under rated compared to others. Discharge current causes \$I^2R\$ losses in the battery, with \$R\$ being the battery's internal resistance. I would personally perform testing at a C/10 or C/20 rate.

While I understand 1 amp would be the C/20 rate for a 20Ah battery mentioned in comments, OP has not specifically stated C rates anywhere in the question and has clearly made no effort to control the C rate.

As a last point regarding your testing - your "milliamphours" line on your plot is perfectly linear. It would appear that you've just multiplied the "1 amp" you are dissipating by the time step. As mentioned many times now, you are clearly not discharging at exactly 1 amp.

If you're not going to adjust resistance to draw current correctly, you should at least correct the capacity measurement based on the current you're actually measuring. You should measure the resistor's exact value, then use Ohm's law (\$I = V/R\$) along with the voltage you're measuring to calculate the exact current that's flowing through the resistor (and, from Kirchoff, the current coming out of the battery), and multiply that by the time step to get a better capacity measurement.

Not the answer you're looking for? Browse other questions tagged arduino batteries battery-charging or ask your own question.