I found a great deal on an old Heathkit I0-12 at an auction the other day and decided it would make for a fun project. The unit looks awesome and could probably survive a bomb blast. When I got home, I opened it up to check its condition and surprisingly, short of the dust, it appeared to be in really good shape! 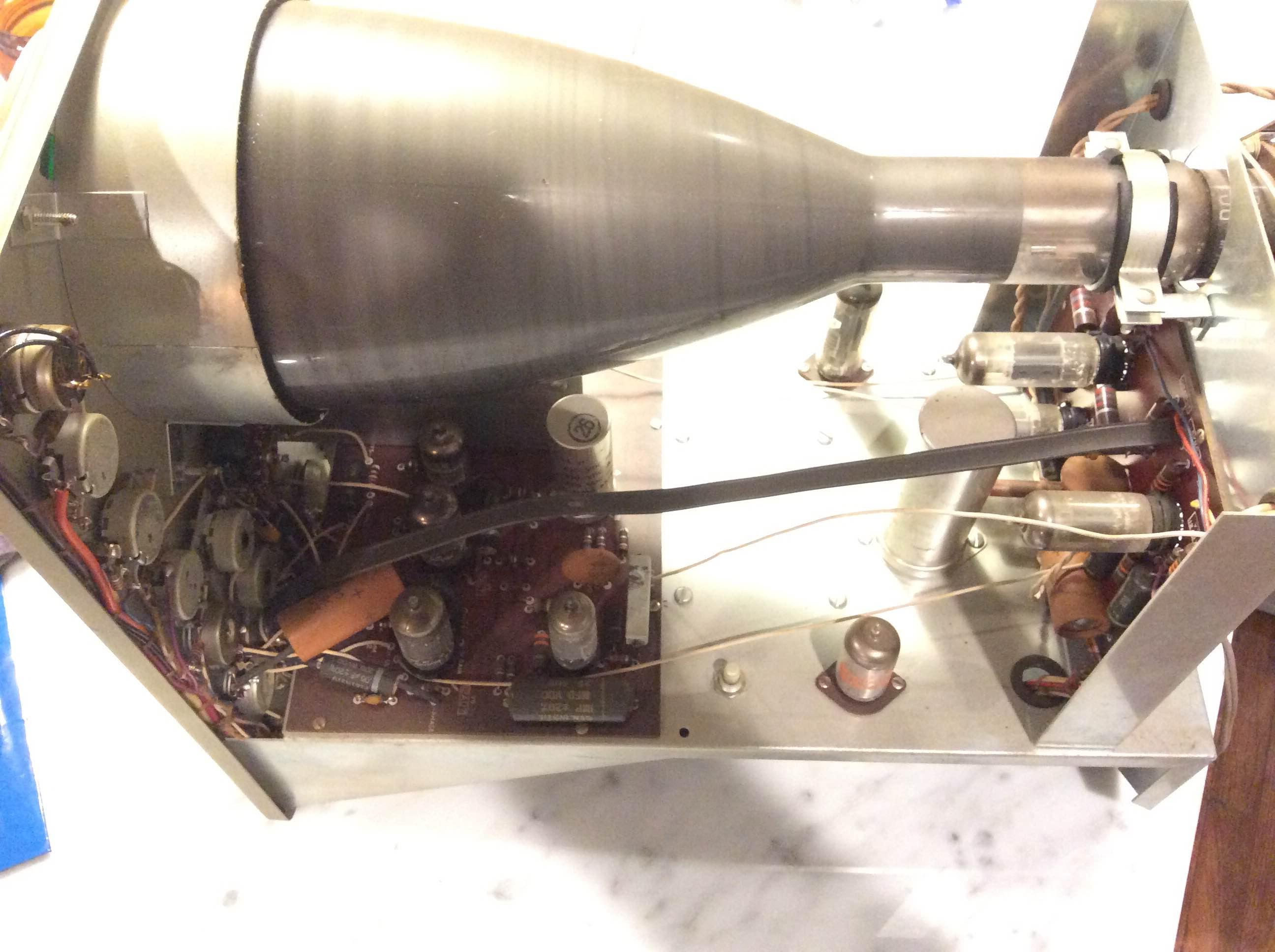 After doing a little bit of research online just about everybody that tries to breath some life into these generally replaces all of the caps and resistors. Which really brings me to reason for this post.

I flipped the switch. There was light!! It took a couple seconds for the cathode ray tube to warm up and I was able to adjust and center a shaky signal, but I was receiving quite a bit of interference. I was able to produce a somewhat erratic sine wave, but there were many peaks along the curve.

I left it turned on for about 10-15 minutes while I messed around with the knobs, and then I heard one of the caps start sizzling, so I immediately shut it down. There was a clear fluid coming from a .1MFD 1600v cap that is connected to the PSU circuit and runs to the CRT. Could this have been what was causing the rough signal?

Does anybody have any experience refurbishing an old oscilloscope like this? Can I expect to see a clearer signal after replacing all the capacitors?

Are each of the tubes rectifiers? Is it worth replacing all of these?

Buying this unit for such a great price I was looking for a great way to expand my knowledge of circuity and gain a nice piece of functional art to add to my workshop.

Any comments, guidance, or constructive criticism would be really great and very much appreciated. Thanks!

I don't see much point in shotgun replacement of parts. Unless you have the ability to troubleshoot (as in another oscilloscope, and good schematic and the necessary skill set) you're asking for trouble.

If the scope was not used much, it's quite possible the tubes are in fine working condition.

Replace the cap that is sizzling. If it is left running, the transformer will probably be toast and then the unit is garbage. You should also replace the electrolytic capacitors (the metal cans and any others you can identify). This may be the schematic.

Then test the unit as best you can and see if it will meet specifications.

Be careful, the second anode voltage on the CRT is potentially lethal when powered. After removing power, make sure you discharge the high voltage filter caps and electrolytics before touching it or you might get a nasty jolt.

They're not great scopes (very low frequency limit, AC coupled), but any scope is better than none.

This scope is a good 5 Mhz scope. All the people that work on these scopes, replace all the capacitors as per "Pentium100" said earlier, you don't need to replace the small mica or disc caps. You do need to check the resistors also, in that they do sometimes change value over time. The tubes will need to be checked last, then a through calibration. There is a great rebuild and recap video done on this type of Oscilloscope by "Paul Carlson of Carlson's Lab on You Tube".

Not the answer you're looking for? Browse other questions tagged oscilloscope repair or ask your own question.