Are series groups in parallel better than strictly parallel with a resister on each leg? And for parallel do I calculate Ω just for each voltage LED or do I need to somehow do a calculation that takes into account the total number of LED's and their different voltage? But then what do I do for groups in series in parallel? 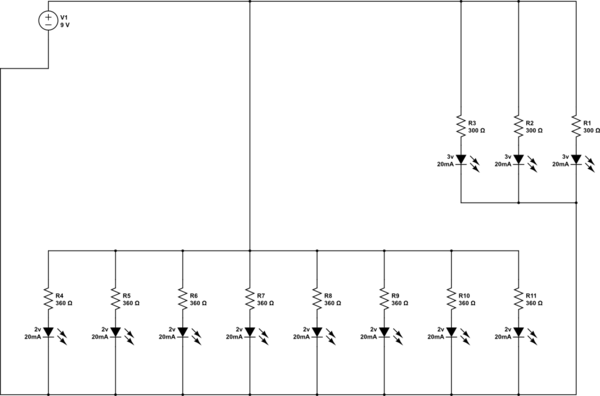 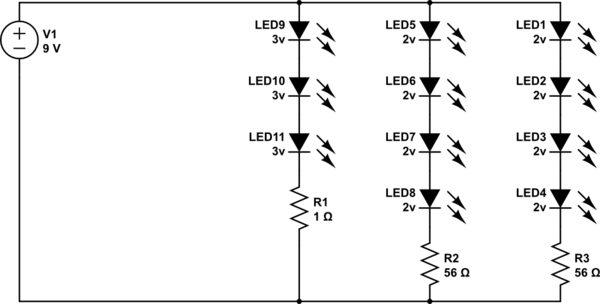 Which makes the most sense? Is this resistor math correct? And which is best for brightness? Thank you!

Each chain consumes 20mA of current. Given that, your goal should be to reduce the number of chains. This is what your second layout does, hence it is more efficient.

The number of chains does not affect the calculations; each chain is restricted to the maximum desired current using the exact same equations.

The second setup uses less than half the amount of power as the first set up, more than double the battery life.

5
Powering twenty high intensity LEDs
4
Powering RGB LED's and using a PWM chip; series or parallel?
4
Optimal Placement of LED's
10
How is current split with two parallel LED's?
0
Current Limiting Resistors for Multi-Branch LED circuit
0
How many LED's can a TLC5940 16-Channel LED Driver power?
4
Is there any pitfall to using resistors in series AND parallel for an LED array?
0
LED driver: how to choose current and voltage?