I would like to make a simple circuit to store or save 1 bit of data. The circuit should be able to remember the state of an LED ( on or off ) even if the supply is disconnected from the circuit. I need it to work like a hard drive, flash memory or SD memory card of cell phones.

I made a circuit as shown in the picture, The output is an LED in series with 470 ohm resistor. I use two bush buttons to charge or discharge the capacitor so the output LED is on or off.

After disconnecting the supply or turning off electricity, The circuit was able to remember the state of the LED for few minutes.

After 2 or 3 minutes, the capacitor discharged completely and the circuit lost its data. 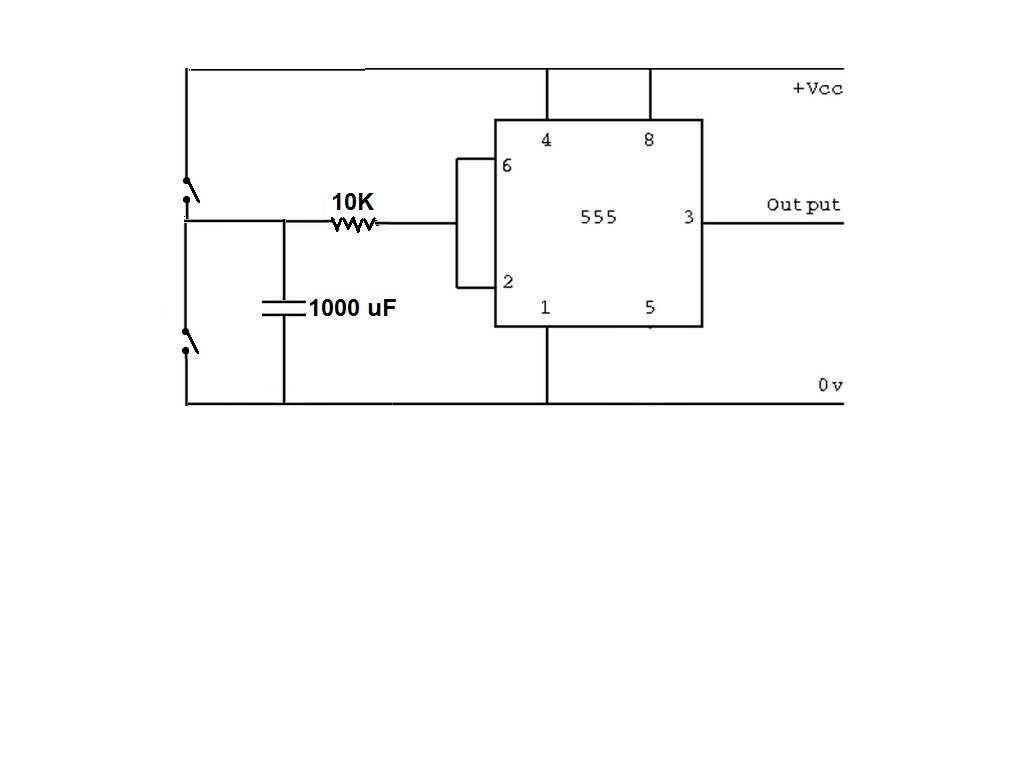 How can I stop the capacitor from discharging ? or how can I slow the rate of discharging so that the circuit lose its data after a week or more ?

In this circuit I uses 555 as an inverter ( not gate ) but I may use any other IC's , My aim is just making a simple permanent memory.

The original electronic nonvolatile memory is based on ferrite cores. While it's relatively easy to magnetize such a core in one direction or the other to store a one or a zero, it takes some fairly sophisticated circuitry to read it back reliably.

Modern nonvolatile chips rely on charge storage, but in order to make this work, you need to be able to create a capacitor that has essentially zero leakage, and a way to read out that charge. This can only be done in the context of microelectronics, where the capacitor is a tiny piece of metal (the "floating gate") that's completely encased in glass (silicon dioxide), and is read out by means of its influence on a nearby transistor.

Another choice is ferrorelectric RAM (FRAM), which uses a special dielectric material that has two distinct, stable polarization states. Again, this only works in microelectronics.

Therefore, you need to pick some other physical phenomenon to store your bit of information. One obvious choice is the latching relay, which stores information in the physical position of its armature, which is held in either of two stable positions by a permanent magnet or a spring. The position can be changed by applying a relatively short pulse of current, and the readout is accomplished by attaching electrical contacts to the armature.

Make a circuit that flicks a mechanical switch eg. useless box. The circuit would need to be powered up to change/read state but it would keep it in between.

A simple solution would be a micro controller such as a PIC12F635 which is available in an 8-pin DIP or smaller, and has a built-in clock and brown-out reset circuit (the latter is important to maintain the integrity of the EEPROM nonvolatile storage).

The code required is not much, a good starter project.

The only external parts required would be a bypass capacitor and a current-limiting resistor for the LED.

Pure electronics won't make a permamnent memory cell, but charge in a capacitor can approach it (will need regular refreshing). EEPROM/Flash memory extends this requirement to 10's of years, so for practical purposes it is called permanent. But this is not something you reach do with ordinary components.

Real permanent memory uses some sort of physical bi-stable phenomenon. The magnetization of ferrite cores menioned by Dave was used extensively (ever heared of a 'core dump'?). The bi-stable (or latching) relay mentioned by helloworld922 easier to use.

When you look at how this was done in early computers you must realize that there is a balance between the complexity of the single cell, and the complexity of the driving circuit. A ferrite core is very simple, but the driving and especially the readout circuit is very complex. For a bi-stable relay it is the opposite: the relay is fairly complex per bit, but the control circuitry is very simple.

What is your purpose?

A fuse. It might be annoying to replace often, so you could upgrade to a breaker.

A latching relay as mentioned by @DaveTweed is the simplest.

If you want a solid state solution you could use a parallel interface memory IC like this thing. You can just tie the address lines to a fixed address and only use one of the data lines. You will need some additional glue logic.

Then mount that just above a sensor like this hall sensor. Then you can look at the polarity of the remanent field with the hall sensor (just an analog comparator) to determine the state.

From the fuse/breaker answer given by William Price came the most obvious solution:

Take a lamp. Plug it in. Turn it on. Unplug it. Move it to Hawaii. Plug it in.
It turns back on.

Turn it off. Unplug it. Take it home. Plug it in.
It stays off.

If you want a computer to activate/deactivate the LED, it's not as helpful. However, if you use a push button toggle switch, and an electronically-activated solenoid, you could get the job done. Push the button to turn the LED on, it activates the solenoid, LED turns on. Push again, LED turns off. Unplug it, and the button is still mechanically set to on or off.

Not saying this is remotely the best way to do it, but it's functional.

Most simple one component solution would be a bi-stable relay. And you'll only need a resistor to read the state.

The OP doesn't indicate how often the LED will blink. For the purposes of this discussion, lets assume it is four times a minute.

In one year it will blink

Since the EEPROM needs to capture both last the on and off events, then it will be written to twice that number, or about 4.2 million times. In five years, this is 21 million times.

Clearly, this will exceed the specs of any EEPROM that I now of built into a microcontroller.

But there is a simple solution for this. Instead of using the same byte over and over to keep track of the on or off status, one can use an array of bytes, which fill up the entire chip.

You need two bytes for each element in the array. So a 64 byte EEPROM, like the one in the PIC16F84A, could hold 32 elements. Each time you write to the EEPROM, you write a 0 to the status byte (meaning this element has data), and either a 0 to the data byte (LED was last off) or a 0xFF (LED was last on). The next time you access the EEPROM, you index through the elements until you find one with a 0xFF status byte, and then use the that element. If there are none left, then re-initialize the EEPROM and start over (for the low-end PICs, this means writing 0xFF's to each of the status bytes; for the PIC24, there is a command to erase the whole EEPROM). If you need to know the last status of the LED, you index through the array as before, but now go back one element and read out the data byte. 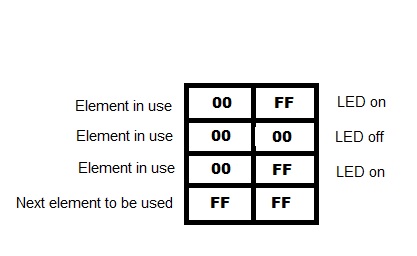 The PIC24F16KA102, with its 512 byte EEPROM and bulk erase feature, would be able to handle 25.6 million writes, enough for over five years.

This may be a very naive suggestion... but how about about building a low-powered transistor latch driven by a button battery. Then use the output from that to feed into an OP-amp that is driven by the power supply. That way you unload the button battery of the strain of feeding the useful output; you cannot use that anyway while the supply is turned off, right?

EDIT: Also - according to comment below - it is advisable to make it so that the latch is isolated from the OP-amp if the supply goes away. Any kind of relay - or equivalent circuit - that is fed by the supply should be able to do the job there.

Considering that a simple wrist watch can be driven by a button battery for years, powering a simple latch should give it a life-time per battery that lasts a decade. You can even put two batteries in parallel so that you can swap them out - one at the time - without losing the information.

A small CPLD can be programmed to drive the protocol needed to write a simple set of values to an I2C bus.

Combine the two and you have a very small solid state switch that remembers it's state.

Not the answer you're looking for? Browse other questions tagged memory flash sd capacitive flash-memories or ask your own question.

1
How to store one bit without the use of an IC?
1
What's the simplest way to store 1 bit after a device has been turned off?
-2
Non-volatile storage system made up of logic gates
19
Wear leveling on a microcontroller's EEPROM
2
Circuit that retains a state even after power loss
1
Is there a way to save state in a very low power way?
0
Power ON-OFF Memory Logic Circuit

17
How do I protect SD card against unexpected power failures?
5
Storing an LED's previous state even when power is removed
0
Memory Problems
0
Schematics for using IC 7489 memory
19
SRAM isn't blank on powerup, is this normal?
0
Memory limitations on interfacing SD Card with 4-bit SD data transfer mode
0
Is it possible, and if so, how difficult would it be, to replace the volatile memory in Gameboy games with non-volatile memory?
0
Automatic charging a capacitor to an adjustable voltage level, for impulse LED driving
8
What determines the ground state of a computers dram?
0
Difference between 24 bit and 32 bit addressing mode in QSPI flash