I want to switch 50V AC voltage. Maximum drained current will be 5A. Frequency is 50Hz. Switching speed is not important, can be real slow, it is not a problem in my application.

I wanted to use solid state relay at first for this purpose. But as soon as I started to search an SSR, I saw that their prices are too high. For a cheaper alternative solution, I want to use MOSFET transistors (can be a different transistor type as well) instead of solid state relay.

Can you suggest me a MOSFET equivalent circuit of the solid state relay with the specifications I gave above?

The 1st two use FETs and can be switched off and on throughout an AC cycle as required. Switching speed need to be understood. The floating gate versions have an RC time constant that controls turnoff unless extra care is taken to avoid it.

(1) Place a MOSFET inside a 4 diode bridge as the "load". Ac to bridge AC input is "shorted " = on for AC when FET is on Gate is floating so you need to get voltage to gate. Not hard but needs thought. Rough diagram - better later maybe. Transistor shown here is bipolar but MOSFET does same job. MOSFET always sees DC. Load sees AC switching. Drive gate with opto. Derive power by eg resistor feed from drain to a reservoir cap to drive gate via opto.

The circuit diagram below shows an example of a practical implementation of this principle.
Note that the FETS are both N-Channel and that the Sources of both FETs are connected and the Gates of both FETs are connected. This circuit works because MOSFETS are two quadrant devices - that is, an N channel FET can be turned on by a positive gate realtive to source regardless of whether Drain to Source voltage is +ve or -ve. That means that the FET can conduct "backwards" if driven in the normal manner. Two FETS are required connected in "anti series" (opposite relative polarity) because of the "body diode" inside each FET which conducts when the FET is biased oppositely to usual. If only one FET was used it would conduct when the FET was turned off when Drain was negative relative to source. 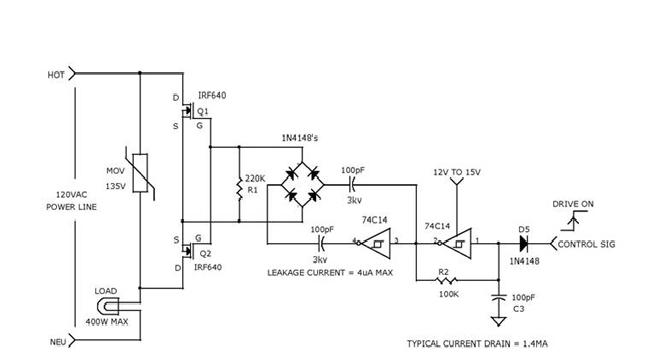 Note that "isolation" and level shifting of the on/off signal to the floating gates is achieved by the 2 x 100 pF capacitors. Consider the circuitry at right as potentially at mains potential. The right hand 74C14 forms an oscillator at about 100 kHz and the two inverters between them provide opposite polarity drive via the 2 capacitors to the 4 diodes which form a bridge rectifier. The rectifier provides DC drive to the floating FET gates. The gate capacitance is probably ~ a few nF and this is discharged by R1 when the drive signal is removed. I'd guesstimate drive removal would occur in tenths of a mililsecond but do the calculations yourself.

The circuit is from here and notes

You specifically mentioned MOSFETs.
A TRIAC is also commonly used in AC SSRs.
Below is a typical TRIAC circuit.
L1 may not be used.
C1 & R6 form a "snubber" and values depend on load characteristics.

If you really need isolation, then it gets complicated to do this yourself. You say switching speed is low, so why not a regular mechanical relay?

If you don't need isolation, then there are various possibilities. One is to use a triac and control it directly from your circuit. For details, we need to know more about how this 50V AC is referenced (or not) to whatever power supply you have available.

You're absolutely right, SSRs are expensive. The most simple alternative is to roll your own using an opto-triac + power triac:

This costs 80% less than the equivalent SSR.

The MOC3041 switches at the voltage's zero-crossing, so that may be an advantage. If you don't need that, the MOC3051 is a random switching opto-triac. A disadvantage of using a triac may be that there's a voltage drop of a few volts, and when the voltage to switch is just 50V the loss is more in comparison than for for instance 230V.
A MOSFET as switching element may sound like a better idea, but if you use it in the bridge like in Russell's solution you'll have about the same voltage drop anyway, but this time across the diodes.

The best solution regarding voltage drop is the good old electromechanical relay. Depending on the type of load you'll have to derate the relay, so that for switching 5A you may need a 16A version. Price for the 16A relay is comparable to the DIY SSR.

Not the answer you're looking for? Browse other questions tagged transistors relay mosfet solid-state-relay or ask your own question.

15
Why do Solid State Relays cost so much?
1
Solid state relay (or equivalent/alternative) to drive 6V DC from a 3.3V micro
4
Electromechanical Relay for VAC switching
0
Switching 150kHz mains for an LC load
2
Switching by use of transistor or relay