Can capacitors be exposed to temperatures above the max. operating temp?

I have an NVIDIA GeForce 7300LE graphics card that's having problems (see here), and I heard about baking the card to restore old solder joints.
The thing is, this involves putting the card in the oven at 385 oF (200 oC) for 10 minutes and the capacitors on the board are rated to 105o C operating temp and I don't know if they would be damaged by the high temps.
Would the 385o temps damage the caps or plastic connectors on the board, or would it be fine?

EDIT: Well, since I needed to replace that card anyways, I figured I would try it and see:

I think that the temperature might not have been stable enough to keep the capacitors from frying (it was a toaster oven, I guess I should have used something with more of a good temperature gauge) Ah well, I guess it was worth a try. Time to go to the local computer parts shop and get a new graphics card :)

It's been pointed out that the temperature should have been stated as 385 F and not 385C. That makes a substantial difference. I'd STILL recommend the test that I suggest at the end as a guide to what to expect. 385F = 196C

The formula I gave suggests a 5% reduction in lifetime under those conditions over 8 minutes. That would almost certainly be so far outside the sensible range of use as to ber very very very approximate - but shows how extreme even 196C is compared to 105C.

Unless the board is otherwise a complete write off, don't even think about it.

Apart from the effect on the capacitor the process will cause major damage to other components - see below. Aluminium "wet" electrolytics have a electrolyte with a boiling point roughly the same as water has. While some capacitors are made to withstand temperature will above water boiling point, most aren't. There is an extremely good chance of inflicting major damage to the capacitors.

BUT if you REALLY want to try, see the suggestion at the end.

Even if it is wholly dead there are other things you can do which have more chance of fixing it.

What you propose has a very good prospect of doing major permanent damage.

Any plastic component on the board will melt below that temperature.
Of all the plastics you are liable to encounter only two have continuous service temperatures above water boiling point (100C / 212 F) - those are PTFE and PEEK and you will have little or none of either on your board. (Just maybe some PTFE in a connector).
Table of plastic characteristics here

Resoldering all the solder joints that you can get to MAY have a better effect.

There is no guarantee that the page you cited tells a genuine story. I have seen pages which make the most outrageous and certainly untrue claims complete with step by step instructions on how you too can waste time and money following their example.

This is the reflow temperature profile recommended by NXP: 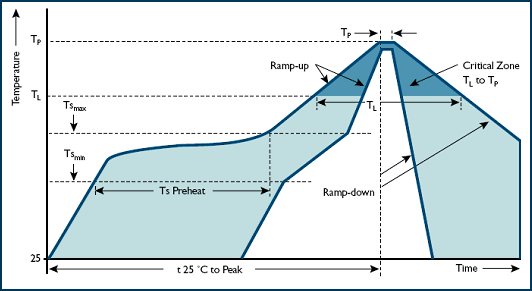 The preheat phase is the longest, and NXP recommends a maximum of 8 minutes for this. Heating to 200°C for 10 minutes for a second time probably won't ruin your capacitors, but it may reduce their life.
The most important, however, is the peak temperature phase, where the temperature goes for a short time (about half a minute) to about 250°C, depending on package volume. This is the phase where the actual soldering takes place.
Just the preheat phase may not be sufficient to cure the solder joints.

Just to report a personal experience.

I had a laptop with the same problem in the video chipset (nVidia GeForce 7000m), which (apparently for bad use of the lead-free solder) in many cases had shown instability due to the cracking of the solder balls under the chip itself.

I've heard many people talking about reworking (resolder the chip with professional tools) or reflowing (simply heating it, with professional tools) the chip. Both alternatives were inconvenient for me because they were more expensive than the value of the entire laptop. So I've found the same tutorials about using ovens, heating pistols, and so on...

I decided to try with my oven, but mantaining the temperature below 200 oC: I heated it to 150 oC for some minutes and then quickly to 180-190 for less than a minute, before cooling it down slowly. Everything was wrapped in aluminium foil, with a hole above the chip. (I tried to mimic the reflow profile of a component of which I had the datasheet :) )

This worked for 3 or 4 times, and then I've started having a different problem, and changed laptop. But the damages I caused in the board were only some plastic supports for screws detached from the board.

But do that only if necessary, because it will hopefully give some more life to the board (in my case almost a year) but you don't know. And do that only if you are sure that the problem is solder cracking.

Not the answer you're looking for? Browse other questions tagged capacitor connector soldering temperature surface-mount or ask your own question.

9
Reflow at home or solder manually?
17
SMT solder reflow temperature profile
7
Detect damaged SMD capacitors
4
remove all components from a board with oven/heater?
1
Help on finding the polarity of the capacitor
0
Removing SMD connector from PCB
10
Solder paste not wetting at all
3
PCB Reflow in oven, will solder melt before VRM's, caps etc get damaged?