Two varying & equal opposing Induced EMF's and a converter in between?

This question is to touch base on the understanding and knowing limits of a DC converter when in a complex and odd situation.

A battery of constant voltage is in series to a conductor that is placed in a changing magnetic field over time, inducing an EMF with a polarity as indicated in the circuit as "Induced EMF(1)", both the battery and the induced EMF(1) are in series as the input voltage to the DC converter, the intention is to increase or decrease the applied voltage and ultimately the current(if there is a load). The outputted voltage( BAT + Induced EMF(1)) is opposed by Induced EMF(2) that is exactly the same in magnitude to the induced EMF(1), both I-EMF(1) AND I-EMF(2) are induced at the same time. I'm confused as to how things would turn out due to the converter, in a general sense what might happen?

Edit: In a case of a boost converter: 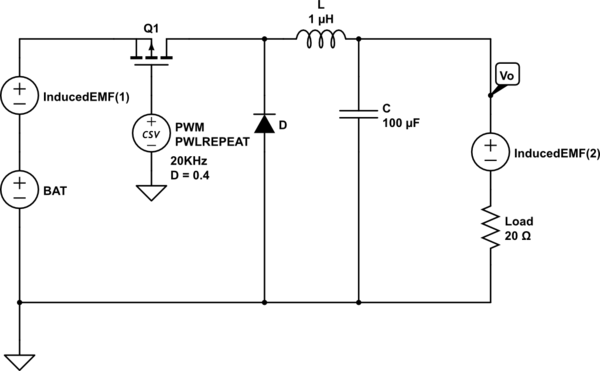 Where Vout(Vemf(1) + Vbatt) < V(emf(2). However, the output current is higher than inputted now, my goal is to cancel out the induced EMF(since they are equal) I think adding an inductor would solve that? Due to the higher magnetic field caused by the higher current outputted?

Edit(2): Without changing the properties of the given magnetic field that created EMF(1) and EMF(2) for the case of a buck-converter specifically I propose adding an inductor to compensate(and if possible) cancel out EMF(2) from the output voltage: 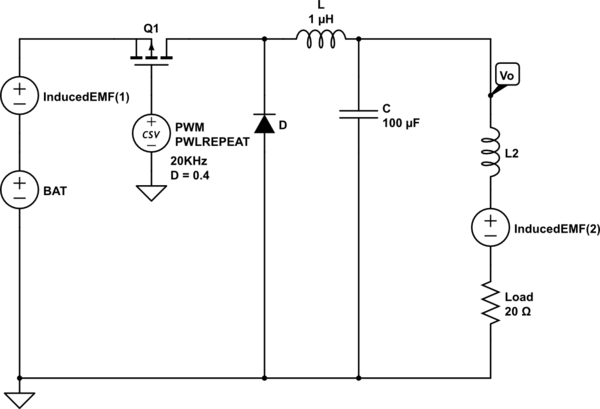 Since the output is of a higher current(do to Vbatt + Induced EMF(1)) the conductor would create a considerable magnetic field to maintain the current, when the Induced EMF(2) induced, it should compensate for the loss?

My assumptions are periodic steady state and that the oscillations of the magnetic field are much lower than the switching frequency of 1 MHz. Thus we can assume that the induced EMF is constant over 1 switching period. If this is not true, additional analysis would be required.

Let's first examine the circuit without the induced EMF. The DC converter is a boost converter with transfer function \$Vo / Vi = 1 / (1-D)\$ where D is the duty cycle of the clock. See Boost Converter for details. Note that under this situation the output voltage will always be greater than the input voltage.

Working through some algebra we get:

In summary for a boost converter: 1) Output voltage will increase as we can combine BAT + V(IEMF1)

2) Output current will increase as the boosted voltage from EMF1 is larger than the drop from EMF2.

Let's now examine the case of a buck converter as shown in the second schematic.

First we consider the effects of EMF1. This induced voltage adds to the input voltage and thus the output rises to \$D (BAT + EMF1)\$.

Now we see in this case that the load voltage will decrease because although EMF adds to the output voltage, it is multiplied by a duty cycle that is less than 1. Thus EMF2 will take away more.

2) Overall load current goes down since the load voltage went down.

Now onto your last question. In this scenario we assume Vout(EMF1, BAT) < V(EMF2). I agree that the current through the output is larger than the input; this is common to any buck converter. You go on to ask how to cancel the induced EMF.

This is where it becomes a bit fuzzy to me. My understanding is that you would like some method to reduce the effects of the induced EMF on the load voltage / current.

My ideas for reducing the effects of induced EMF on the load would be as follows:

1) Attempt to reduce the area of any loop in this circuit. This is a layout issue. Remember that induced emf is given by $$\Phi = \iint B dA$$ where phi is the induced emf, and B is the magnetic field through some surface. By minimizing the area of the loop such as the loop formed by D, L, and C, we reduce the emf. This method would be aimed at reducing the effects of any induced emf / perturbation.

The reason that adding an inductor seems like a sub optimal solution to me is that I don't think we have enough information to design something like that. Sure, an inductor will generate magnetic fields, but generally we try to keep the flux inside the inductor. Additionally, we don't know the polarity or magnitude of the emf and it would be difficult to have an inductor that compensations accordingly. Lastly, adding an inductor to the buck converter will have additional effects on the converter itself.

Hope this helps answer your question. If my understanding of the question was off, please add more details and I can try again.

Extended analysis for added inductor L2. My understanding of the question is you are interested in the transient effects of the induced EMFs on the load current. Let us model both induced EMFs as unit step functions \$V(EMF) u(t)\$.

Now let's abstract away the standard buck converter and simply model it as a voltage source of \$DVin\$. It is connected to inductor L2 and load resistor R. Lets first examine this simple first order system under the case of a unit step \$D V_{in} u(t)\$. The source is connected to impedance \$sL+R\$. Where s is the Laplace operator, think \$jw\$ if you're more familiar with that notation. We can write the load current as \$i = DV_{in} / (sL+R)\$ or in differential form as \$DVin = L di/dt + iR\$. Standard first order system, we expect a exponential response with time constant \$L / R\$.

Now let's go back to your schematic. Under this transient analysis that we are doing, the induced EMF is some step function. Adding the inductor will resist the change in current as your intuition suggests.

As to the question, will it cancel out EMF2? I think that really depends on the properties of the induced EMF. The inductor is essentially low pass filtering the current. If the disturbance is significantly longer than L / R, the relevant time constant, the inductor will not be effective. Remember that inductors have stored energy in the magnetic field. It is the stored magnetic field that is being used to reduce the effects of the transient.

On the other hand, if the duration of the induced EMF transient is less than the time constant of \$L / R\$, here we can at least reduce the effects of the transient.

Sure if you stick a large enough inductor with the load, you can reduce the effects of an induced emf on the load current.

Not the answer you're looking for? Browse other questions tagged voltage dc-dc-converter or ask your own question.