Switching DC with MOSFET: p-Channel or n-Channel; Low Side Load or High Side Load?

I think, it is time I understand working principle of MOSFET transistors... 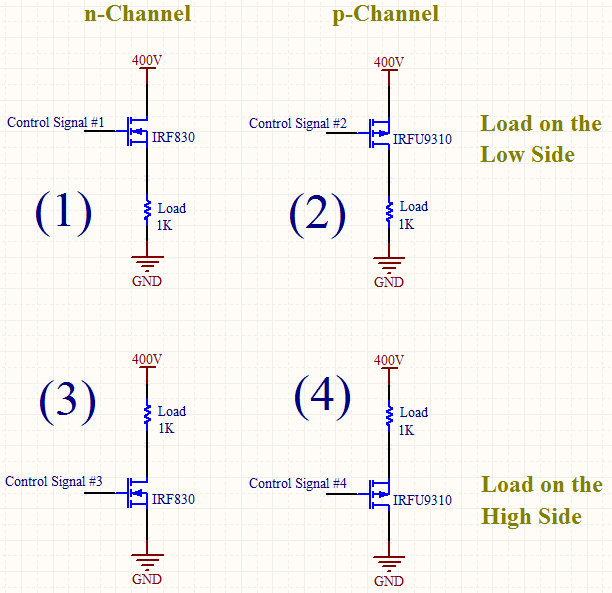 Question #1
Which of the driving techniques are feasible? I mean, which of these four circuits would work with correctly applied control signals?

Question #2
What is the range of the voltage level of the control signals (CS1, CS2, CS3, CS4) that loads and unloads the resistor? (I understand that exact boundaries of on and off states must be calculated individually. But I'm asking for approximate values to understand the working principle. Please give statements like "In circuit (2), the transistor turns on when CS2 is below 397V and turns off when above 397V.".)

All the circuits are feasible when correctly driven, but 2 & 3 are far more common, far easier to drive well and far safer wrt not doing things wrong.

Rather than give you a set of voltage based answers I'll give you some general rules which are much more useful once you understand them.

This makes sense of controlling the FETs in the above circuits.

Define a voltage Vgsm as the maximum voltage that gate may be more +ve than source safely.
Define -Vgsm as the most that Vg may be negative relative to s.

Define Vth as the voltage that a gate must be wrt source to just turn the FET on. Vth is +ve for N channel FETs and negative for P channel FETs.

Circuit 3
MOSFET is safe for Vgs in range +/- Vgsm.
MOSFET is on for Vgs> +Vth

Circuit 2
MOSFET is safe for Vgs in range +/- Vgsm.
MOSFET is on for - Vgs > -Vth (ie gate is more negative than drain by magnitude of Vth.

Circuit 1 Exactly the same as circuit 3
ie the voltages relative to the FET are identical. No surprise when you think about it. BUT Vg will now be ~= 400V at all timed.

Circuit 4 Exactly the same as circuit 2
ie the voltages relative to the FET are identical. Again, no surprise when you think about it. BUT Vg will now be ~= 400V below the 400V rail at all times.

ie the difference in the circuits is related to the voltage of Vg wrt ground for an N Channel FET and +400V for a P channel FET. The FET does not "know" the absolute voltage its gate is at - it only "cares" about voltages wrt source.

Related - will arise along the way after the above discussion:

Q: You mentioned that the circuits 2 & 3 are very common, why is that?
The switches can work in both quadrants, what makes one to choose P channel to N channel, high side to low side? –

A: This is largely covered in the original answer if you go through it carefully. But ...

In circuits 2 & 3 the gate drive voltage always lies between the power supply rails, making it unnecessary to use "special" arrangements to derive the drive voltages.

In circuit 1 the gate drive must be above the 400V rail to get enough Vgs to turn on the MOSFET.

In circuit 4 the gate voltage must be below ground.

To achieve such voltages "bootstrap" circuits are often used which usually use a diode capacitor "pump" to give the extra voltage.

A common arrangement is to use 4 x N Channel in a bridge.
The 2 x low side FETs have usual gate drive - say 0/12 V, and the 2 high side FETS need (here) sav 412V to supply +12V to the high side FETS when the FET is turned on. This is not technically hard but is more to do, more to go wrong and must be designed. The bootstrap supply is often driven by the PWM switching signals so there is a lower frequency at which you still get upper gate drive. Turn off the AC and the bootstrap voltage starts to decay under leakage. Again, not hard, just nice to avoid.

Using 4 x N channel is "nice" as
all are matched,
Rdson is usually lower for same $ than P channel.
NOTE !!!: If packages are isolated tab or use insulated mounting all can go together on the same heatsink - BUT do take due CARE!!!
In this case

Body diode: All FETS that are usually encountered* have an "intrinsic" or "parasitic" reverse biased body diode between drain and source. In normal operation this does not affect intended operation. If the FET is operated in the 2nd quadrant (eg for N Channel Vds = -ve, Vgs = +ve) [[pedantry: call that 3rd if you like :-) ]] then the body diode will conduct when the FET is turned off when Vds is -ve. There are situations where this is useful and desired but they are not what is commonly found in eg 4 FET bridges.

*The body diode is formed due to the substrate that the device layers are formed on is conductive. Device with an insulating substrate (such as Silicon on Saphire), do not have this intrinsic body diode, but are usually very expensive and specialised).

This is a good question! There are some nuances that the other answers have missed, so I thought I'd chime in.

The short answer is the following:

When would you ever not use this topology? The only major reason to do so is if you have a load that needs to have one terminal tied to circuit ground, for electrical safety or to minimize electromagnetic radiation/susceptibility. Some motors/fans/pumps/heaters/etc must do this, in which case you are forced to use the high-side topology #1 or #2.

I've written a more detailed discussion in a blog post.

You don't specify if the control voltage is with respect to ground, or if it can float.

Circuit 3 is the most practical N-channel scheme. The source is at a fixed voltage with respect to ground, which means you can provide a fixed gate-source voltage to control it. The MOSFET will be 'on' anywhere from +2.5 to +12V above ground, depending on the device.

Circuit 2 is straightforward like circuit 3. If the control voltage is referenced to ground, proving 397.5V to 388V from gate to ground (-2.5 to -12V from gate to source) will turn the MOSFET on. The source is fixed (always at +400V) so controlling the gate means a fixed voltage is all you need. (Unless your 400V bus collapses, but that's another issue).

Circuit 4, like circuit 2, is tricky. When the MOSFET is off, the source sits near 400V. When it is on, it will fall to near zero. A variable source means a variable gate supply with respect to ground, which is again a messy proposition.

In general, keep your sources fixed where possible, or if they have to float, use a floating supply to control them.

Not the answer you're looking for? Browse other questions tagged transistors mosfet dc control or ask your own question.

-1
mosfet (n or p) as switch on vcc
47
MOSFET as a Switch - When is it in Saturation?
16
Source vs Drain polarity for MOSFETS
5
When should you or shouldn't you use a specific fet?
4
How to use N-channel MOSFET as high side switch (non-buck switching)
7
Turning a microcontroller on with a flip flop
0
How to reduce the voltage dropped in a mosfet used as a switch?
0
MOSFET N channel power switch: high side doesn't work and low side would need multiple MOSFETs
0
best 5v switch with 3.3v