Transformer dimensioning for SMPS (not the Aw Ae way)

There's a lot of documents that talks about dimensioning of the transformer for a SMPS power supply (in this case one quadrant only is not of my interest).

this site cites the following:

The main constraint in all cases (except for saturable inductors) is that peak magnetic flux density Bmax should not approach the core material's saturation flux value Bsat.

Contrary to popular misconception, Bmax does not depend on the magnetic material properties or air gaps. It does not depend on the transferred power neither. However, for thermal reasons, we have to limit ohmic losses in the wires. Most textbooks provide formulas for estimation of the core size based on the product of magnetic cross-section area by the window area available for the winding. Unfortunately, this method is not very helpful because these formulas are based on pretty much arbitrary selection of current density and on an assumption of a certain window utilization (fill) factor.

So, I calculated the Bmax for my project, and it gives-me similar results to that of poweresim.com. But with the AwAe method it requires more than 4 times the core size!

Anyway, the Bmax formula being close to the results, it does not have the current included in the formula. So that any power (respecting the Vpk and f in the formula) could be used with the same Ae transformer.

Is the core size not dependent on H, just B? That is, having enough space for windings for the projected currents/potentials and getting Bmax below saturation Bsat, and dis-considering hysteresis, eddy-current losses, what should I consider?

If not what should I consider then? If I try to calculate H, it will give-me values really above saturation (from B-H curve), for near most materials, so I think thats wrong.

I don't know if you have miscalculated but it works like this.

H is ampere turns per metre and the metre part is the mean length around the core that the magnetic lines of flux follow: - 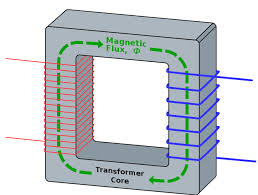 So, amps (peak) x turns (primary) divided by core length gives you H (peak). Note that the "amps" number chosen is the magnetization current i.e. NOT THE SECONDARY LOAD CURRENT (referred to the primary).

B = \$\mu H\$ where \$\mu\$ is the effective magnetic permeability of the transformer core in absolute units. Effective permeability depends on several factors such as length of core (mentioned above), the cross section, the material type and if any gaps are present.

Next, look at the data sheet for the core and see what flux density will be produced for the given H field. If it looks like it's beginning to heavily saturate then increase turns a tad.

If turns are (say) doubled, primary inductance quadruples and current quarters. This is useful because, for a given primary drive frequency, if you double the turns you half the H field. If really pushing the core you will have to consider gapping.

Not the answer you're looking for? Browse other questions tagged transformer switch-mode-power-supply electromagnetism power-electronics or ask your own question.

1
The \$I^2R\$ loss in transformer is eddy current loss or copper loss?
1
core size for low frequency transformer
0
Calculating the core area for a low frequency transformer part 2
0
Inductor Design - How do I know what value of Bmax and Current Density to choose?
0
How to calculate number of turns, N for a gate driver transformer?
0
Transformer section and magnetic field
1
High permeability core material at high frequency
2
Magnetic core and compositions
1
Will the current needed for core saturation (transformer) increase with applied voltage?