Having two 3.7V "3000mAh" Rechargeable Li-ion batteries, I tested connecting them in series and parallel.

Using a multimeter, I measured the amperage of single batteries and it's about 6A. When connecting them in series, the voltage is doubled (it becomes 7.4V).

When connecting them in parallel, I expected that the amperage will be doubled, but it's not. It remains 6A.

Why does this happen? How can I increase the amperage using more batteries?

From what I know, when connecting batteries in series makes the voltage to be increased and when they are connected in parallel, the amperage is increased–but in my tests this last expectation didn't happen. Why? 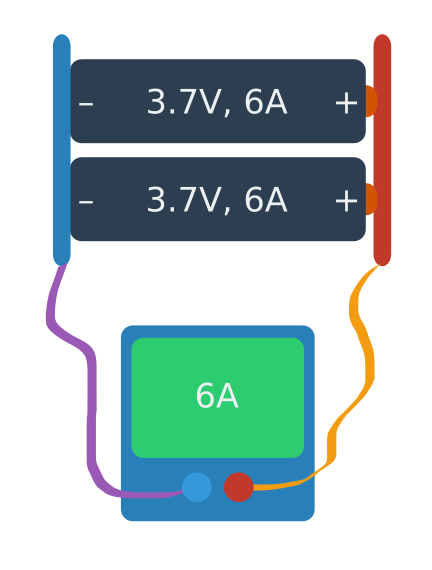 My two batteries, in parallel, connected to ampermeter.

As the comment mentions, paralleling and short circuiting lithium batteries is potentially very dangerous if you don't know exactly what you are doing. Most Li-Ion batteries have a protection circuit which includes overvoltage and overcurrent protection, but it's still not a good idea at all. Much better would be to test this using a couple of small alkaline batteries (e.g. AAA) and still do it briefly.

If you absolutely must test the current on the Li-ions, then read the datasheet, see what the maximum current rating is and for how long, then use external current limiting on each battery.

Look, let's get one thing straight: V=IR. If you take two "ideal" 3.5V batteries and put them in parallel, what you read across the parallel pair is still 3.5V. If you put that voltage across a 1000 Ohm resistor, you'll get 3.5mA - the same as you'd get with one cell alone! That would be true no matter how many 3.5 volt batteries you put across the parallel bundle. If you try to "burst" the current by shorting + and - terminals, the current you get depends on a whole bunch of stuff: internal resistance, battery chemistry, the rearrangement of charges in the battery electrolyte, temperature change, etc. And, as was pointed out, it's never a good idea to just short the terminals out, particularly in a lithium battery.

What does change when you put the cells in parallel is the amount of energy stored in the whole system. This is frequently expressed in Watt.Hours (or, if you know the open circuit voltage of the cell, Amp.Hours.) So in an ideal case, doubling the cell volume (putting two cells in parallel) could double the Amp.Hours, NOT Amps!

That is, there'd be twice the energy stored in total system. You'd get the same current for a longer time. But even this may not be quite true. Nothing is ideal! If the open circuit voltages and internal resistances of the cells you put in parallel were different, you may stress out one battery over another (as pointed out elsewhere) and that battery may not supply the same amount of energy as the one next to it. Quite simply, the "stronger" battery might pump current into the adjacent battery and rob the load of useful energy in the long run. I know a lot of other people responding were driving at this. I thought I'd just put it in a more physics/chemistry setting.

Many very helpful pointers that this is a bad idea, but I haven't seen anyone actually answer your question.

If you want to double the current by adding batteries, you put them in series. This will double the voltage (approximately) and leave the resistance (nearly) unchanged, so the current will double. However, in your case, you're SHORTING the batteries, so doubling the current is an even worse idea, because it's just way too much current for those batteries.

So if you parallel 2 3amp will result in 6amp.

The best way to check for sure is to discharge the 2 paralleled batteries and measure their discharged amp capacity from 3.7v to their cut off minimal voltage, normally 3v.

Not the answer you're looking for? Browse other questions tagged voltage batteries parallel amperage series or ask your own question.

3
Batteries connected both in series and in parallel