Why are my MOSFETs burnt?

I have been doing some project which worked for few months and then MOSFETs started burning. Here is detail of schematic: 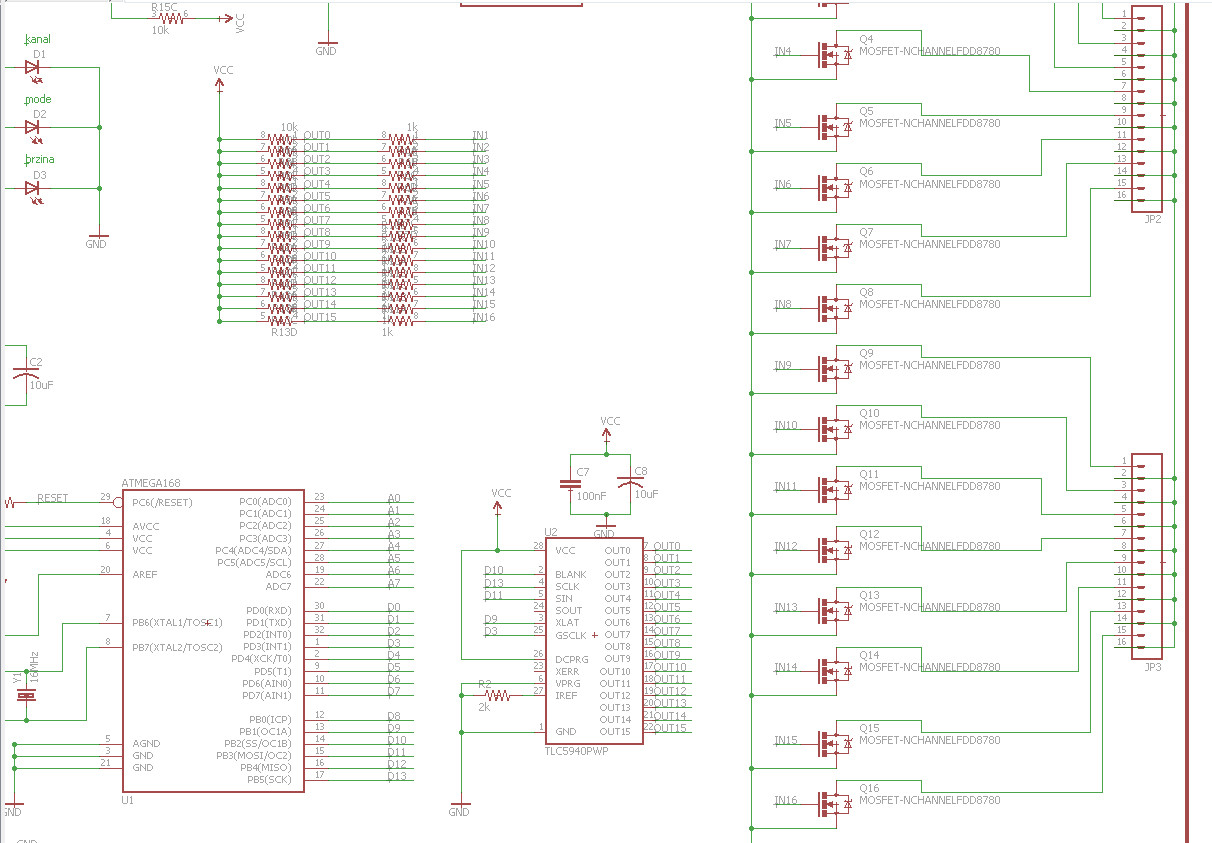 So, we are using:

Microcontroller is Atmel Atmega328(Arduino bootloader, basically Arduino) which communicates with TLC5940 and controls TLC's outputs. Those 16 outputs are connected to MOSFETS.

Actual load are LED lights. Power of LED light on each channel is max. 15W.

Behaviour(code at Atmega) is to do various things with outputs, blink, fade etc.

Thanks anyone who puts thier time into resolving this issue.

EDIT: here are more details I, seems to be, forgot:

There are three possible causes I can think of that would cause the FETs to be damaged:

1) Over dissipation. You say the LEDs are 15W - how much current is that? Do the FETs get hot?What voltage are they being driven from? How fast is the multiplexing from the TLC5940? If the gate drive is not enough to ensure saturation they could get excessively hot and be damaged.

2) Over voltage. You have no snubbers (an R and C) on the outputs to dissipate voltage spikes if there is inductance in the wiring, you could get these spikes at turn-off of the FETs.

3) SOA violation: Is there excess capacitance on the output lines that could cause excessive currents at turn-on of the FETs.

To start with I would look in detail at the turn on and turn off of the output stages. Ensure there is enough gate drive, that the drain voltage goes down to a very low voltage when the FET is on. Look for spikes at the drain when the FET turns off.

Looking at the FET current is not so easy - a low value resistor in the source of one of the FETs would be one way or a current probe.

From your description, you are connecting the MOSFETs directly in series with the voltage source and LEDs. When dealing with LEDs we always need current limiting resistors in series to limit the current.

Without a current limiting resistor, the voltage source is simply across the LED and a large current will be flowing through the MOSFET and diode, causing the MOSFET to burn. To calculate the current limiting resistor, you should first determine the current you want flowing through your LED based on the desired brightness. Then it's a matter of (VCC - V_LED) / R = I_LED, solve for R. See your LEDs datasheet for the relationship between brightness and current.

I would modify the circuit in 1 of 2 ways. First, add the series current limiting resistors to the LED loads. This should limit the amount of current flowing through the MOSFETs and fix the issue burning the MOSFETs. Second, the TLC5940 actually already provides constant current control. Thus, you could attach LEDs directly to the TLC5940 and it will take care of limiting the current. Now your R_iref would actually be meaningfully controlling the correct current and you don't even need the MOSFETs.

Lastly a few comments on the gate drive circuitry. 1k gate resistors seem very large. These series resistors limit how quickly the gate of the MOSFET can charge and discharge as you have noted. It can also help avoid oscillations on the MOSFET gate. However as we increase the gate resistance, more time is spent transitioning between ON/OFF. There is large power dissipation during this transition and it is wise to keep these transitions short. Something on the order of 10-100 ohm might be more appropriate. Additionally, the 10k pullups to VCC should not make MOSFETs turn off faster. We are using NMOS devices, so OFF is equal to a low input voltage. By weakly pulling the gate high, these resistors are attempting to turn the gate on. I don't particularly think fast turn offs are necessary in this application either, but the standard way of implementing fast turn offs are having a diode placed between the control terminal and the gate. During turn-on, the diode is reverse biased and all current flows through the gate resistor, slowing down the turn-on. During turn-off, the control terminal is grounded and the gate is high. The diode is forward biased and the gate can discharge through the diode for a quick discharge. See this question

12
How to reduce MOSFET turn-off delay

0
Arduino-controlled slot car set - Why are my MOSFETs burning out?
1
MOSFET not fully OFF when Gate Voltage is 0V
1
N03L Mosfets for LED strip driver
0
High Power LED Strobe making a Whining Noise when powered by a PWM signal
9
Why do my P-channel MOSFETs keep dying in this H-bridge?
22
Why am I cooking MOSFETs?
2
MOSFET Drain - Source Current limiting
2
Why are n-channel MOSFETs at high-side position and p-channel MOSFETs at low-side position on many push-pull circuits?
0
Why does a MOSFET's temperature shoot up when the gate isn't at the correct voltage?