Fuses, circuit breakers, transistors, ect... are all rated in amps. Why are resistors rated in watts instead of amps? Does their breakdown/failure include more than just heat?

If resistors were rated by current, then every single resistor part number would have a different rating, and the current ratings would be all over the map. For instance, this resistor kit has 20 different resistance values, all with the same power rating (1/4 watt): 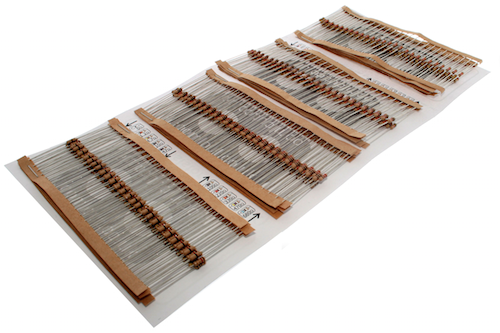 If resistors were rated by current then each resistance value would have its own current rating. Much more confusing.

Resistors commonly fail when asked to dissipate too much power - the permissible power is given in Watts. The power dissipated in a resistor is determined by its resistance, and the currrent through it, or the voltage across it.

Resistors do also have a maximum voltage rating, which is independent of the resistor value. All resistors of a given style (size and construction) will have the same power and voltage ratings.

I don't think I've seen a maximum current rating for a resistor.

A power rating on a resistor already specifies the current and voltage ratings on it as well. We know that P = I*V = I^2*R = V^2/R. From a power rating, we can derive the voltage and current limits.

The failure mode of resistors is primarily due to heat. The resistivity of materials is dependent on temperature and the thermal stress due to excessive temperatures and deform or destroy the structure or packaging of the resistor.

Something like a fuse is rated in amps because the purpose is for it to fail open at a specified current.

Not the answer you're looking for? Browse other questions tagged power resistors basic physics or ask your own question.