With a homemade PCB, I've built my own Arduino-inspired controller, with an ATmega328P flashed in a way to work @3.3 V. I power the whole thing with a battery@ 7.4 V.

It really doesn't work. The LDO outputs something between 1.9 and 2.6 V, making the ATmega really unstable (it didn't even pass the serial welcome printf).

If I make a measurement at the output of the regulator, plugged to the battery in input, I've more or less 4 V. With just an LED and a 330 Ω resistor, I get the 3.3 V.

It seems like this LDO doesn't like my circuit, but it doesn't take more than 50 mA, so I in the capacity of the LDO.

Between the ground and the VOUT I've two 22 µF capacitors to stabilize the voltage across the circuit (I use an NRF24L01 RF module, and it's really sensitive to voltage stability).

I've tried to remove the two 22 µF capacitors, and I've replaced them with a 1 µF X7R ceramic capacitor (input capacitor). Just changing that and I was able to upload code to my Arduino-bootloaded ATmega328P, and it was booting and sending a serial message. The output voltage was between 2.8 and 3.2 V. I've put a 1 µF capacitor on the input side (input capacitor) and voltage is now stable at 3.3 V. Already a good progression!

But if I plug anything into my PCB (RFID reader, RF module, etc.) then it stucks and doesn't boot again.

Here's the PCB we've designed (stab Vreg2 being the input capacitor, stab RF2 is removed and replaced by a through-hole wire to link both PCB sides): 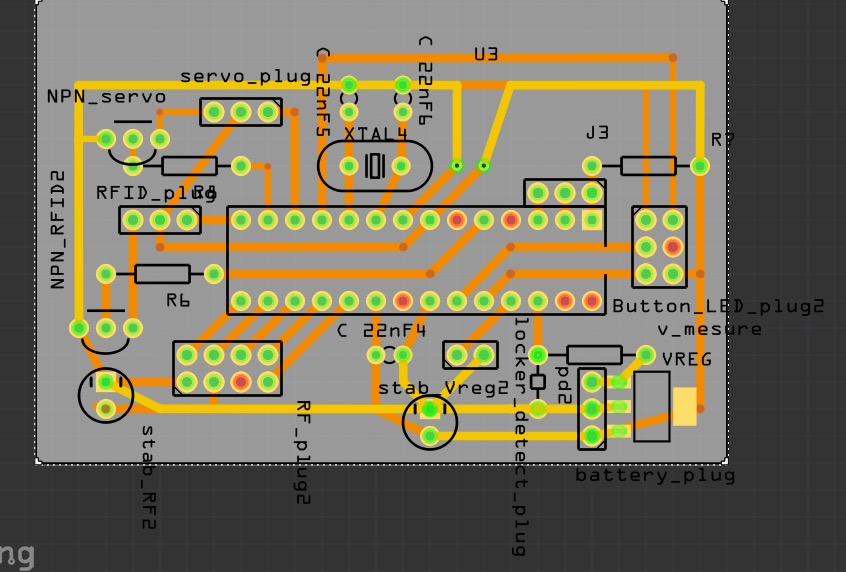 What's going wrong? With another LDO I don't get the trouble.

This family of LDOs is highly sensitive to output and input capacitance. Low ESR is mandatory.

Changing for ceramic capacitors makes it work a lot better (my ATmega initializes and accepts code upload). There remains many ways to improve stability, according to the document AN765 - Using Microchip's Micropower LDOs:

However, the ESR of ceramic capacitors sometimes can be too low, requiring a 1 Ω series resistor to ensure stability.

Not the answer you're looking for? Browse other questions tagged batteries atmega ldo 3.3v or ask your own question.