An electro-magnetic interference (EMI) source is connected to a filter and to a LISN.

The EMI source is a common-mode source: it generates an undesirable signal which flows from the generator \$ V_g \$, equally divides itself and flows through the branches HOT and NEUTRAL and comes back to the generator through ground (notice that LISN too is connected to the same ground).

There are two available topologies for the filter.

and in the second one it is as follows:

and in the second one it is much more complicated. If I did not make mistakes it should be

I know that \$ R_g \gg R_{LISN} \$; moreover, in such cases the inductors should be placed after a small impedance and the capacitor after a great impedance. This is confirmed by the fact that the second configuration is better than the first. But, again: why?

I can't immediately see this from the expressions I obtained: both have \$ R_g \$ in the denominator. Even if it is not immediately visible from the maths, which could be the physical reason for this behaviour?

Sparing the maths, an easy way to think about EMI is a high frequency voltage will take the path of lowest impedance back to its source. In short, the filter direction will make a difference, in the real world but not so much in the ideal case. 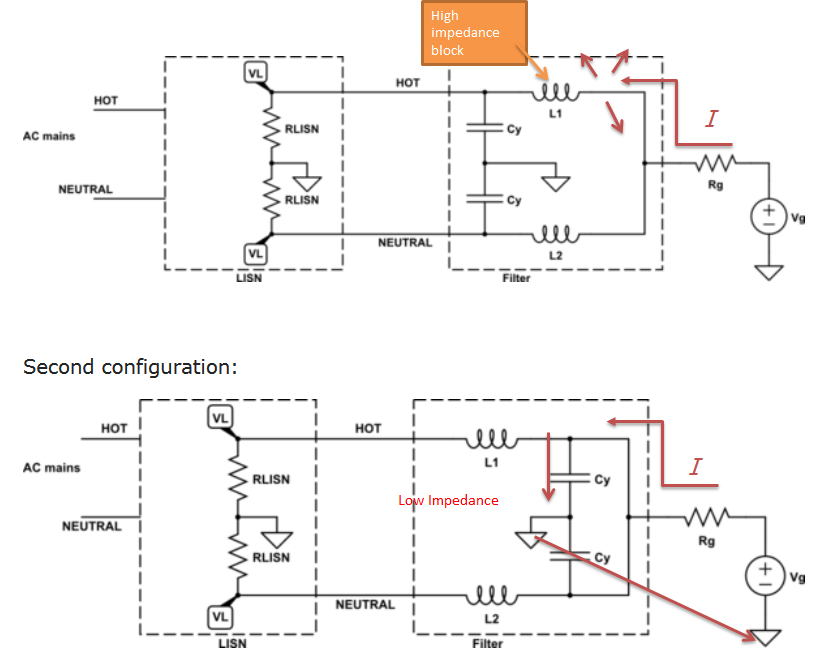 If the filter is placed with caps to the noise source, the preferred current path will be through the caps. You could imagine L as a large impedance placed after a small impedance, the high frequency currents preferred path back to the source is through the smaller resistor, of course you have to make sure the inductance of the filter is significantly higher than the inductance of the cap (which is going to be in the nH range). 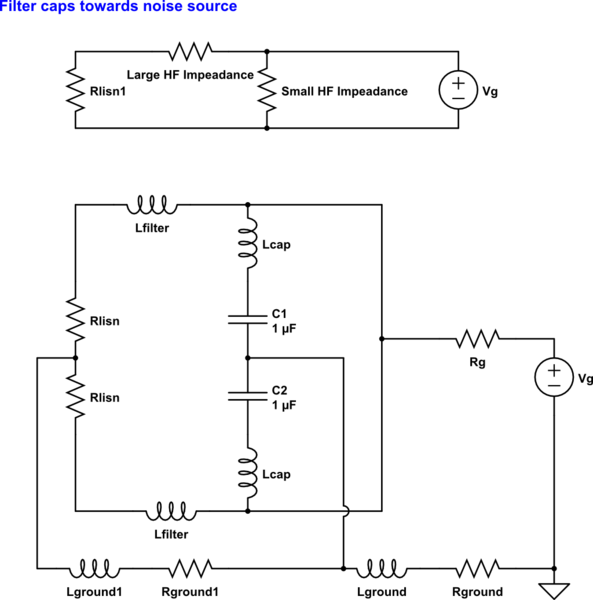 The problem with the second configuration is there is no place for the HF current to go after it is blocked from the filter inductor. Any voltage RF that gets through the inductor will be seen by both the load and the caps equally. It may also be attenuated, however, there may be another preferred path an that is through mutual inductance between cables and capacitive coupling through the air to other physical things to get back to the source. It is extremely difficult to come up with a circuit model of exactly what would happen in a situation like this. There are too many parasitics and cables and terminals start functioning like antennas. If you have ever studied antenna theory, it is more of an art. If the inductor could do the blocking on its own, then why would you need caps in the first place? Ideally they look similar, once you add the parasitics in and account for other effects they are not. 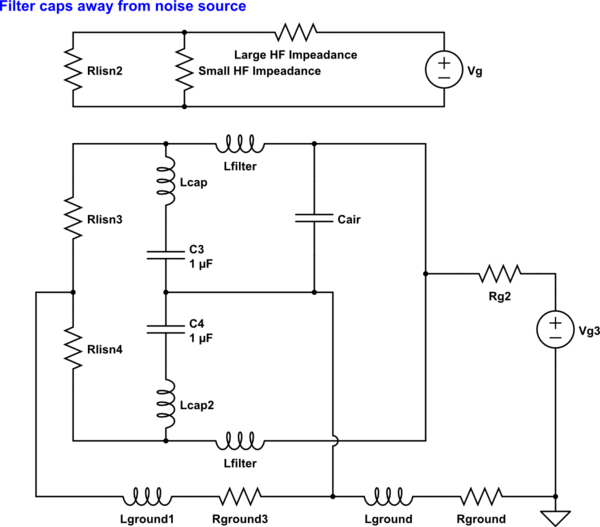 How do I know this? I actually encountered this very problem with a product this week. I had an issue with a switching load. The load was producing RF, which was causing interference on the PCB, even to the extent of causing a micro controller to 'drop out' and have a communications failure. I placed a ferrite on the cable which would be just like adding a filter with only HF inductance\impedance. The problem was attenuated. Then I added capacitors the problem was gone, and it worked better when the caps were pointed toward the load.

Remember the rule: HF will take the lowest impedance pathway, if you provide a better low inductance pathway, you can attenuate the problem. Oh, if your building or selecting a filter, make sure it has low inductance between the caps by placing components close together.

Not the answer you're looking for? Browse other questions tagged capacitor filter circuit-analysis inductor impedance or ask your own question.