How does this transistor dual LED flasher circuit work?

I am a beginner in electronics and have been playing around with simple LED circuits and using Ohm's law to determine what size of resistor to use to limit the current to the LED. I have also been studying how resistors and capacitors work in series and parallel. I think I have at least a fundamental grasp of these theories. I have since moved on to diodes and now transistors and how they are used in simple circuits, again using LEDS. I found the following circuit which uses two transistors, capacitors and resistors to alternately flash two LED’s but I am struggling to understand how it works. 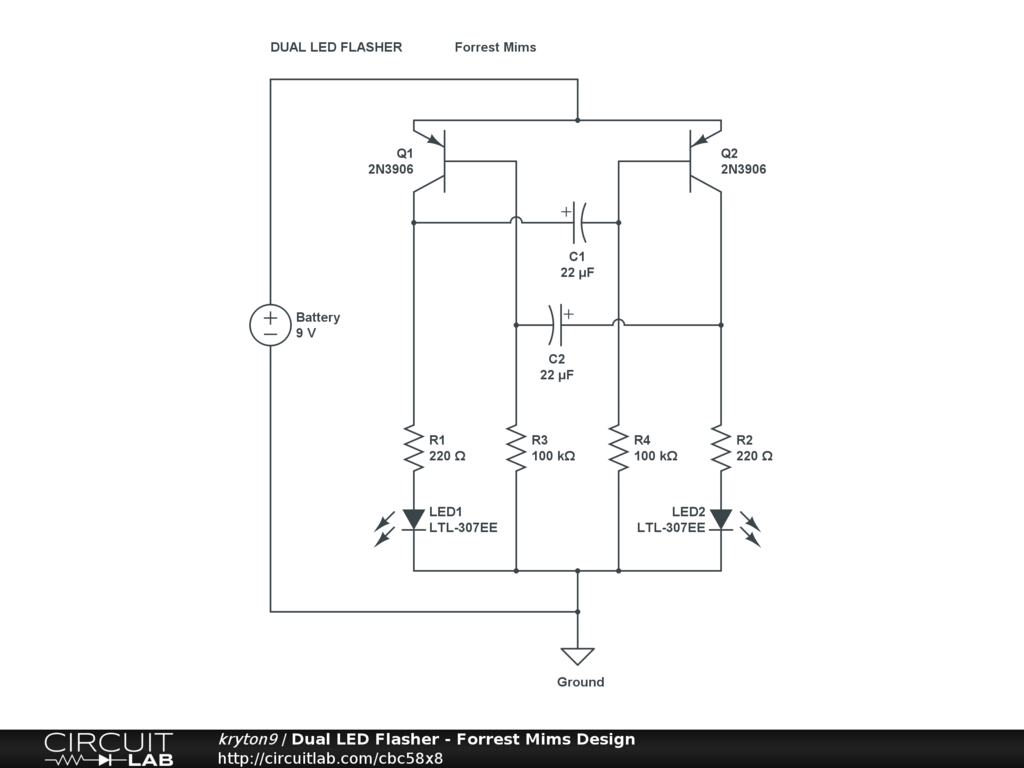 How I think it works is this:

But I have a few questions which I cannot seem to answer.

I have read articles about how a transistor works at this link: http://amasci.com/amateur/transis.html and it has helped some, but the simple circuit above is still fuzzy to me.

Can someone help me to understand this so it “clicks” in my head?

I have also looked at the question below but it has not cleared it up for me.

How does this 2 LED flasher circuit work

I specialize in the clicking of brains.

I remember trying to figure this circuit out when I was around eleven. (The one in my old book used light bulbs, put in Halloween-mask eyes.) Here's my version below. The main trick to these is to re-draw the schematic so it reveals familiar patterns.

With yours, first turn it rightside up, and you'll see that it's actually two amplifier stages connected by capacitors. And, the signals are connected in a loop.

Below is the rightside-up circuit without that looped capacitor connection: 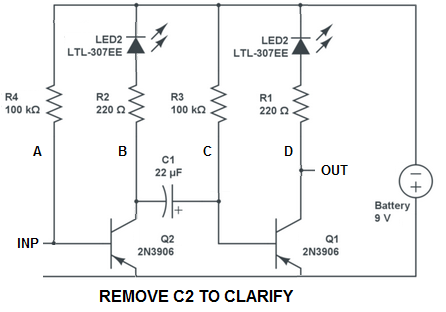 Each transistor is wired as a common-emitter amplifier stage. Each amp will both invert the signal and also make it larger. If we apply a pulse to point A above, a large upside-down pulse will appear at point B. And this inverted pulse goes through a coupling capacitor C1 to point C, which is the input of the next stage Q1. Q1 inverts it again, and the twice-amplified signal appears at the output at point D. All together it's a 2-stage amplifier. Probably you could hook up a microphone and loudspeaker, and use it that way.

So, what happens if we connect the output directly to the input? Positive feedback. Then any small pulse will go through the loop from point A to point D, getting bigger each time. Or in other words, it will break into oscillation.

With C2 restored, we'd expect to see high-frequency sine waves, where their frequency is caused by the time-delay through the whole loop of amplification. It's similar to when you hold a microphone a bit too close to an auditorium loudspeaker. But in reality, this whole system has way too much gain, so it gets overloaded and goes nonlinear. It won't make a high-frequency sine-wave oscillation, instead it clips into big slow square waves. (I guess it's more like holding your auditorium-microphone directly against the loudspeaker cone.) In that case the output slams all the way to 9V and to zero, and the speed of the oscillation is determined by charging and discharging of the two capacitors, which mostly happens through the 100K resistors.

Once you know how it works, you can sit down and plot out the various events. Start out with one capacitor zero volts, and the other charged to 9V, then figure out what happens next, then next after that. You might have to go through several cycles to see how it settles into constant blinks. All the components are symmetrical, so it blinks equally back and forth like a logic flip-flop. Its official name comes from that: non-stable or "a-stable" flip-flop blinker circuit.

That's just one tack on an explanation. Paraphrasing Feynman: if you don't have three or four separate approaches to explain something, you don't really understand it.

This circuit can use very, very low DC voltage yet still keep running. Besides LED blinkers, I've seen it used as various beepers, signal injectors, even analog-synthe instruments (with tiny capacitor values, like 0.01uF etc.) A similar circuit with a big iron transformer can generate 120VAC 60Hz, for an electric shocker or as an automotive "Power Inverter" for low-power appliances. Or use coils wrapped on a CRT ferrite HV flyback transformer and make a mini Tesla Coil or a 20KV power supply. The exact same circuit is in a solar-powered pendulum toy, where the LEDs are replaced by electromagnet coils, with a tiny ceramic magnet on a little pendulum getting kicked back and forth when light shines on the solar cells (with four 1cm solar cells in series, for about 2V power supply in sunlight, far less w/indoor fluorescents.) Or, use very large resistors on the base connection, small capacitor values, and add a few-inches pickup wire to one transistor base, to create the world's cheapest Theremin or touch-sensitive audio generator.

A couple of things to think about.

Firstly even though all of the paired transistors and caps etc are same specied values. Their true characteristics will vary in the case of caps it can be 80%. So this difference is what makes the circuit unstable and results in the leds flashing.

Secondly caps act like a short when discharged and an open circuit when charged. So imagine they are like a tap being alternately closed then opened. So think about how this action would affect the base of your transistor and thereby the current flow between the collector and emitter.

When you combine both of these factors you end up with an oscillating current path.

This circuit is actually a astable multi-vibrator.It acts like a two switch which gives the complement outputs.The basics is that when one transistor is in saturation region,the other transistor will be in the cutoff region,so the LED in cutoff region will glow and the LED in saturation region will not glow.On the next cycle,the cutoff transistor will goes to saturation region and the other will be vice versa and the output get inverse.The frequency depends on the capacitor connected in it.Mostly both the capacitor connected will be same value.

The same circuit without capacitor and with some modification,they will be used to store one bit of data in static RAM.But they are built using MOS technology.

The schematic on the right in the number 1 answer is the only correct schematic with the caps installed with the right polarity.