What's the simplest way to dim LEDs for tail lights?

I'm building tail lights for an old car. They're going to be as simple as possible, high intensity LEDs and resistors to bring down the ~5.5 volts the car supplies to about 2.2.

The car originally used a dual filament bulb, a dim filament for running lights and a bright one for brake lights. I want to use the same LEDs for both brake and running lights, with all of the LEDs being activated at all times. Dim when just running and bright when you hit the brakes.

The car just runs two +5.5 volt wires to the bulb and they share a common ground.

A standard 1157 dual-filament tail light bulb has a lumen ratio between brake/turn signal and running light filaments of about 10:1 (402:38 lumens).

Since the forward voltage of the LED won't change much and the vehicle electrical system voltage is fixed, and since LEDs are fairly linear lumens per ampere, you can simply use resistors in about a 10:1 ratio (actually a bit more since you're using a 6V electrical system and the LED voltage will increase a bit at 10x the current). 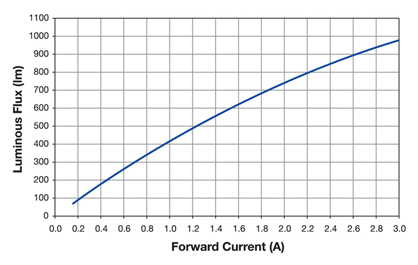 Another way would be to use multiple LEDs and power only some of them, at the same or at reduced current.

Taking a typical power COB LED datasheet, forward voltage is 2.25V typical at 350mA, so if you decide to run it at 250mA/25mA you'd use resistors of about 20 ohms/200 ohms. You can't compare lumens directly because the LEDs are more directional than the incandescent bulbs and the filter absorbs a lot of the light (everything that isn't red). Note: I've assumed the '6V' vehicle electrical system runs at about 7V with the engine operating.

Use different value resistors for running and brake lights. (The resistor values in the schematic are just examples to show the principle). 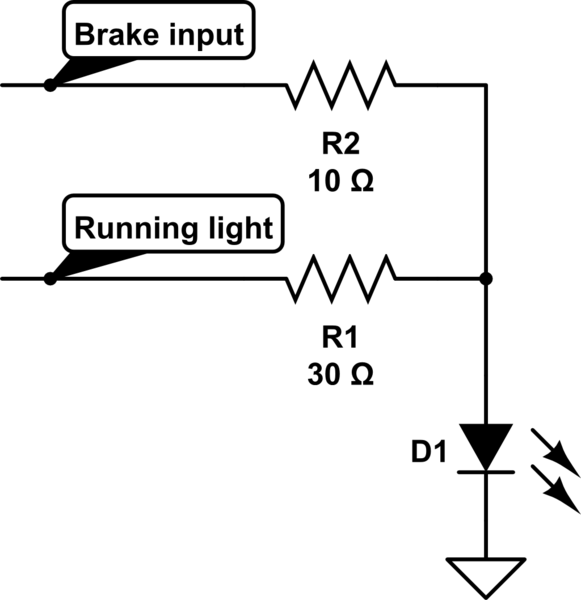 Not the answer you're looking for? Browse other questions tagged led resistors control or ask your own question.

1
How do I select the Correct Diodes and Resistors for my LEDs?
3
calculating resistance for LED strips to use as parking lamps and turn signals
3
Making 12V DC from 6V AC
8
Replacing incandescent bulbs with LEDs, unexpected behavior
3
ON/OFF pulses to rear brake light of sportbike
0
Connect two-function brake light to three-function car circuit
1
Question on Resistors for use with 5050 LED Strips
0
How do I reduce the brightness of an automotive lamp?