The following circuit is of an active rectifier..The inclusion of a diode here signifies a voltage follower for positive Vin voltages ....but for negative Vin diode is off hence the out voltage Vout is zero....and the output of the opamp goes into negative saturation (opamp sinks current for negative Vin cycle)...But here comes a certain slew rate limitation of this circuit...with high-speed signals.The op-amp cannot swing its output infinitely fast, the recovery from negative saturation takes some time, during which the output is incorrect...

In order to deal with it and improved version of the circuit consisting of two diodes is employed as shown in figure 2.. The text says that "The improvement comes because the op-amp's output swings only two diode drops as the input signal passes through zero."...

What does that means...? 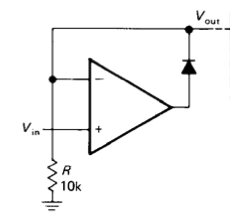 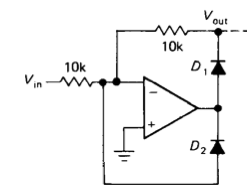 Slew rate limit means that there is a limit to how fast the output can slew- in volts per microsecond. This is a kind of nonlinear distortion.

The text is saying that because the output only has to slew 1.4V rather than the negative supply voltage or so, so it will be able to respond to zero crossings faster.

If you think about the output, just before the input zero crossing it is sitting near the negative supply voltage. As soon as the input crosses zero, it has to awaken and lumber up perhaps ten or fifteen volts, plus a diode drop, in order to begin to raise Vout above zero. In the second case, the output is waiting just 700mV below ground and only has to move two diode drops to begin to raise the output voltage. An LM324, for example, has a slew rate of 0.4V per microsecond (typical), so if the supplies are +/-12V the difference is 3.5usec vs. 32usec or almost 10x better.

In fact this is only a part of the reason for using the second circuit. If you allow the op-amp output to saturate (as the first circuit does for negative inputs) then the recovery time can be much longer than the slew rate would indicate, so the performance can be very bad, depending on the type of op-amp that you are using. Since this condition is not typically part of the specifications (unless they are very proud of how good it is) it can come as a bit of an unpleasant surprise.

0
Working of active clamp....?
6
How are the circuits and design considerations for opamps and comparators different, at an integrated transistor level?
5
Differential input voltage necessary for maximum slew rate in operational amplifiers
6
How to null op-amp offset in current source?
0
Opamp Saturation between different manufacture part numbers
0
Electronic Circuit with Opamp and Transistor to pull down a reference voltage via a diode. (Voltage Limiting)
6
Understanding this peak detector circuit
1
Voltage Follower - OPAMP
0
A few questions regarding the functionality of this negative peak audio detector
1
Mathematical function a of an integrator in series with a non inverting op amp