Why is the Inductive reactance formula (XL=2πfL) not working for me?

I have an inductor labeled as "222" which I believe its means that its inductance value is equal to 2200 Microhenries. I double checked by measuring the inductor with and LCR meter and the value matched the label.

According to the inductor reactance formula "XL=2πfL", a frequency of around 3620 Hz impressed into a 2200 Microhenries inductor should yield around 50 ohms of inductance reactance.

Why is this happening? What am I doing wrong? Why is the formula not working for me? 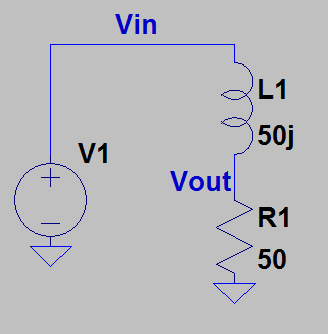 Your inductance has an impedance of j50 ohms at 3620 Hz. Your generator has a 50 ohm resistance at that frequency. Using the standard voltage divider equation, and taking into account the imaginary value of inductor imepedance yields a voltage ratio of 0.707. That value multiplied by your 4 volts yields an output of 2.83 volts which is close to your measured value of 3 volts. The important point is that you must take into account the phase angle of any impedances that you use as a voltage divider. In this case, your generator impedance has a 0 degree phase angle while your inductance has a 90 degree phase angle.

Not the answer you're looking for? Browse other questions tagged voltage inductor impedance reactance or ask your own question.

7
Calculate the value of an inductor using an RL or LC circuit
0
Is Faraday's Law not working?
0
How to measure High-Frequency inductance of inductor using an LCR meter?
0
Complex reactance formula explanation
5
Is the formula for inductive reactance the same when considering rectified AC?
3
Why does an induction motor draw more current when the load is increased?
0
Why inductive reactance has two formulas
0
Can someone explain how frequency and inductance affects this pair of coupled inductors?
1
Peak Current vs RMS Current when calculating Reactance