What values for current and voltage are considered “relatively small” or “relatively large”?

I am working with a Yokogawa WT310 power analyzer. A section of their getting started guide, available here, has this diagram: 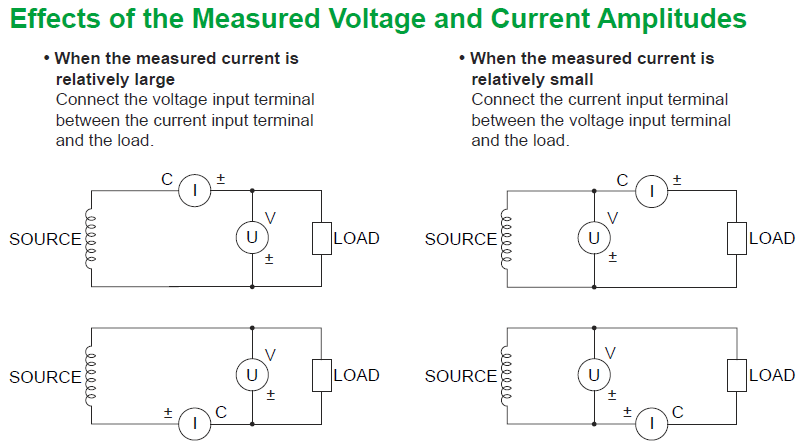 I understand the purpose of these diagrams, and they make sense individually. However, I'm having trouble deciding which wiring scheme I should use, because I don't know what ratios of current to voltage would be considered large and small.

I am trying to measure power on DC devices with voltages of 18V-25V, and currents of 500mA - 10A. Which wiring scheme would be appropriate for these devices? What ratios of current to voltage are considered "large" and "small"?

Voltmeters and Ammeters are not perfect, and so they will have some effect on the circuit. The key thing is the effects of the two instruments differ.

A Voltmeter is essentially a very large resistance. This means that when it is placed in parallel with the circuit there will be a small current flowing through it (when there is a voltage present).

An Ammeter is essentially a very small resistance. So when it is placed in series with a circuit there will be a small voltage drop across it (when current flows).

The two circuits above have different merits.

The right hand circuit would be used in the opposite case, when the current is small. Now in this case the voltage dropped across the Ammeter will be "small" (because the current is small - Ohms law). Now if we were to just use the circuit on the left, we would still be measuring the load voltage nicely, but now the leakage current through the Voltmeter starts to play a part. If it was the same order of magnitude as the load current, then it would add an appreciable error term to the Ammeter reading. As such, we need to place the Voltmeter on the supply side. This removes the error term caused by the Voltmeter "loading" the Ammeter. As the voltage drop is small, the resulting error term in the voltage measurement will be small.

Now in the above I used the terms "small" and "large" frequently. And the think is they are relative. Relative to what? the characteristics of the meters. You need to look at the error terms caused by both meters compared with what you are measuring. Lets do an examples

So clearly the left-hand arrangement is terrible for my made up example. A second example could be made where you let the load resistance be equal to that of the Voltmeter, in that case if you work through the calculations you would find the readings on made with the right-hand circuit would be \$50\%\$ out, whereas the left-hand circuit would be very close to being accurate.

Essentially you need to look at how your load compares with the resistance of the Ammeter to get an idea of which to use - "relatively" is relative. If we look at the numbers you specified, that would yield a lowest possible load resistance of \$R_{min}=\frac{18\mathrm{V}}{10\mathrm{A}}=1.8\Omega\$ and a largest load resistance of \$R_{max}=\frac{25\mathrm{V}}{0.5\mathrm{A}}=50\Omega\$. According to the specifications on page 5, that meter has an input impedance for the Voltmeter of \$2\mathrm{M\Omega}\$, which is much larger the worst case load resistance meaning the loading effect of the Voltmeter will be negligible. The resistance of the Ammeter is around \$6\mathrm{m\Omega}\$ which is quite small compared to what you want to test. So basically in this case it doesn't matter which arrangement you used, but I would go with the circuit on the left as it would result in the smallest error term.

My feeling is that at the currents/voltages you're operating at, it won't make much difference either way. If you were measuring some micropower single-coin-cell-for-three-years job, then you'd have to care.

Not the answer you're looking for? Browse other questions tagged power measurement current-measurement voltage-measurement or ask your own question.

7
Powering large LED array
1
Galvanic Voltage and Current strength
0
constant voltage drop at (relatively) high current
2
What's the most economical way to digitally measure 240V mains voltage, current and power factor?
0
Voltage and Current sensing
1
Why voltage sensors are reading these values
0
What will happen if I put a small resistor in series with a large motor and 24V battery?
2
Non-intrusive measurement of current and voltage
1
Voltage and Current Sensor for Alternating Current