I'm implementing, as a hobby, a simple data logger. I previously asked a question about running a ~10m cable to the MCU for a Dallas/Maxim 1Wire sensor (and therefore 3 wires, since I'm not going to be using parasitic power), and now I'm considering connector and cable. I'd like to, if possible, use something that is easy and cheap to find and use. In that vein, I've come up with a couple possibilities:

Both these ideas use widely-available connectors and cheap multiconductor cable. I'm wondering if one or both of these is grossly unsuitable for some reason, or whether they would work for my purposes. Perhaps there is something much more suitable that I haven't considered?

Both choices seem acceptable.
I'd tend towards the RJ11 solution and use 6P6C for flexibility unless you were absolutely certain no extra facilities would be needed subsequently.

Both systems run the risk of other equipment being plugged in by careless users in an uncontrolled environment.

Cannon a.k.a. XLR connector (see below) is a superb solution if you need the robustness.

Stereo audio cable has the advantage of shielded balanced pairs being available if desired. While I'd expect a 10 metre cable length to be no problem in a benign environment, the shielding is a bonus in severe environments. Balanced pair is less of an issue as you will be using an unbalanced against ground data circuit. Reasonable cost. Cables are available that stand up well to use as a flexible lead. 4 pole versions are available. Connectors tend to short momentarily on insertion and removal - not usually an issue but worth noting. Some risk of connector damage from ham fisted users.

"RJ11" 6P4C or 6P6C cable and connectors has the advantages of low cost, good availability, balanced pairs, additional pair for "something else that turned out to be handy" if 6P6C is used. (Even 6P4C gives an extra wire (unbalanced against ground) for "other use". Cable is designed for use as a flexible cord within reason so is damage resistant. Current carrying capability is reasonable (not a major issue here). Shielding not usually provided. Locking tab connectors. Cheap versions prone to lock tab damage but otherwise resistant to user abuse. Versions can be had which allow pullout without damage - cheaper versions tend to break locking tabs off if abused. Not so good for inline connections usually (but parts are available if this is required).

Nothing stands out except perhaps Cannon microphone connectors.

"Cannon" a.k.a. XLR*: Possibly the most professional solution at a reasonable price if robustness matters. 3 pin and ground and higher pin count versions. Larger connectors than RJ11 or 3.5mm. Connectors available from cheap plastic with modest robustness to reasonably priced near bulletproof full-metal-jacket versions. Latchable. Can use variations on shielded or unshielded cable 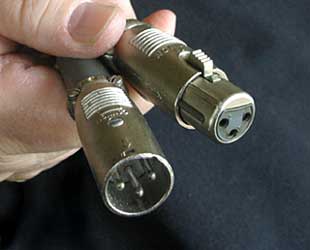 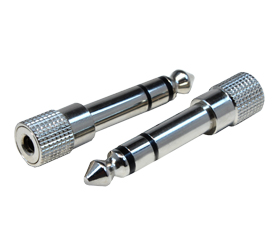 "The XLR connector was invented by James H. Cannon, founder of Cannon Electric in Los Angeles, California (now part of ITT Corporation), and for this reason it is sometimes colloquially known as a cannon plug or cannon connector.

Originally manufactured as the Cannon X series, subsequent versions added a latch (Cannon XL) and then surrounded the female contacts with a resilient polychloroprene, which resulted in the part number prefix XLR

I think almost anything will work here.
The options already mentioned are fine. I think I might avoid an audio jack though (seem to have many issues with them in past, but this is with much use whilst playing guitar, so not quite comparable to "plug in once and forget")
Depending on how the board/box/etc is set up, one option would be something simple that locks, like a 3 pin molex (lockable) header (note there are varying varieties/pitches, check Farnell/Digikey, etc - Tyco/Amphenol are other vendors of good connectors)
These are used for semi-permanent connections (i.e. unlike an audio jack which is expected to have many mating cycles) so may be quite suitable for such an application.

I personally have a bunch of extra rj45 jacks and plugs and have been using them with cat 5 in my projects, its nice because you could design multiple sensors with a variety of setups and just swap them out having up to 4 devices assuming txrx, or 8 if they are just io.

Not the answer you're looking for? Browse other questions tagged connector wire power-line-communication or ask your own question.

3
Which tool do I have to use for wire connector?
2
What connector for this cable?
2
Google Glass 3.5mm jack with battery neck strap
0
Use female Apple lightning connector for charging LiPo
0
Use 4-pin S-video cable connector on RGB LED?
0
Type of connector for PCB project
3
Possibility to use SIL connector for USB
0
What standard plug and play connector is used for an STP cable in electronic instrumentation?
0
BNC Connector/Cable Suggestion