Can I use a power amplifier for power stage of a pure sine wave inverter?

As the title reads, I wish to use a power amplifier (say OPA541) in the power stage of a 50W pure sine wave inverter? How to find the efficiency of this approach? Since the amplifier itself will be sourcing all the current...efficiency may be low? is that true? how low will it be?

I need a variable frequency variable voltage AC source where I can move the frequency from 40Hz to 80Hz. It should be easy to create a variable frequency sinewave, either analog or mcu based. This can be sent to the input of a power amplifier to get the required signal which can then be stepped-up using a suitable transformer. The amplitude can be changed by changing the feedback resistance on the amplifier. My power requirements are 120VAC, 3A for the output. So I was thinking OPA541 (80VDC, 10A) should be a good option.

Is this a good design for a lab source?

what I really need is a 3 phase inverter !!. Once single phase is done, I was planning to use a cd4027 to get 120degrees phase shifted signals and send them to independent power stages.

Your insights shall be very helpful.

Thanks and best regards, Vishal

The OPA541 data sheet says it can operate on power supplies as high as 80 volts and produce a peak current of 10 amps.

This would lead to a power output of 100 watts.

As you require 120V AC at 3A (power = 360 watts) you are well off-the-mark with this device and I have given it the most favourable chances in my analysis such as assuming it is a rail-to-rail output device.

For instance, if you dug deeper into the data sheet you would read that the output voltage swing on a 5A load and +/-35 volt power supplies is about +/-30V and this ratio won't be any better at +/-40V rails so, I'd expect the maximum output voltage to be only 70Vp-p or about 25 volts, leading to a power output of only 87 watts.

You would do better buying one of these: - 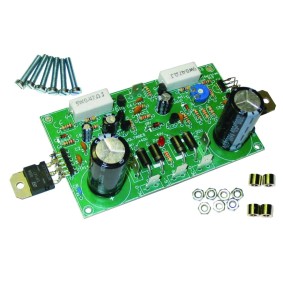 They cost about £20 from Maplin (UK source) and are rated at 200 watts into 4 ohms with a frequency response from 3Hz to 200kHz.

Not the answer you're looking for? Browse other questions tagged power amplifier inverter or ask your own question.