How is a PWM signal converted to Sine using a transformer?

How does a sine choke exactly function? In most high power inverter systems, the primary side of the output transformer is always driven by a PWM signal. The secondary output which is sent to a load should also come out to be PWM. How does a pure sine wave inverter exactly convert this PWM into a pure sine wave?

Here's a PWM signal fed to a transformer and superimposed on this diagram is the sinewave that the PWM represents: -

The secondary of the transformer usually has an inductor and a capacitor that form a 2nd order low pass filter thus converting the PWM signal into (more-or-less) a fairly decent sinewave.

For instance, if you take the high frequency content of the PWM waveform it looks like a square wave with varying duty cycle and, you can low-pass filter this quite easily to get this: -

On the left is the original square wave. In the middle a little bit of filtering has happened and on the right the filtering is far greater.

Thus, the high frequency edges of the PWM signal can be greatly reduced leaving the low frequency content that represents the sinewave. In effect you get something that typically looks like this: - 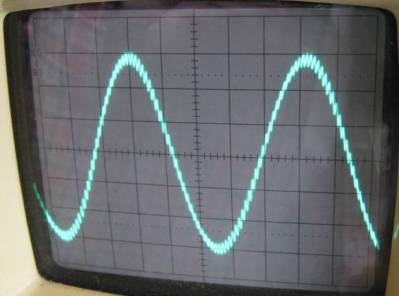 You can still see that the waveform has a little bit of the PWM signal but, in the main, it is a sinewave.

You might note that I mentioned a filter having a cut-off of 600 Hz and wonder why it is position ten times higher than the AC 60Hz. You might ask why not have it at 60 Hz and this would be a good question. The reason it isn't at 60Hz is two-fold: -

It has to be positioned as far away from 60 Hz as possible to avoid large circulating currents in the L and the C of the filter BUT you don't want it up close at 60 kHz because it won't filter out the high frequency content very well. Minimum is 100 Hz I would say and it should be at least 1 decade away from the lowest PWM frequency (generalism alert!).

The basic answer is by low pass filtering. The slower "average" of the PWM waveform is the desired line frequency (like 60 Hz) signal. Superimposed on this signal is the high frequency PWM chopping.

The inductance of the transformer together with some capacitance on the output form a L-C low pass filter. This filter passes the 60 Hz component with little attenuation, but greatly attenuates the many kHz PWM chopping frequency.

Switching power supplies in general work on this concept. The pulse signal contains a deliberate low frequency component, which is ideally all that makes it to the output.

You have two options:
1. Low voltage DC is step-uo converted with push-pull PWM and step-up ferrite transformer at high frequency, it can be also a flyback converter or phase shifted PWM converter rather than push-pull. At the secondary of HF transformer is a rectifier with caps and you get the HV DC voltage. The second stage is H-bridge with sine wave PWM that has to have an output lowpass LC filter to filter out high frequency.
2. DC voltage is inverted with sine wave PWM, then filtered with lowpass LC filter, then a classical step up transformer.

Just a small addition to the answer by Andy. If you carefully craft the PWM waveform it's possible to move the energy in the harmonics to higher frequencies to make them easier to filter out. Have a look for Harmonic Elimination Pulse Width Modulation. I've done a small write up about it. http://www.grant-trebbin.com/2013/10/harmonic-elimination-pwm-comparison-and.html

Not the answer you're looking for? Browse other questions tagged pwm inverter or ask your own question.

16
Sine signal generation using PWM
5
How do I apply PWM signal to the primary side of a transformer to get synthesized sine wave at the secondary side?
3
Safe dead time limit on 19Khz PWM sine wave inverter
0
HF transformer fed fed diode rectifier not working
2
How sinewave pwm inverter filter output?
2
How to design LC filter for smoothing out sine wave from sine PWM?
0
How would a mains transformer react to unfiltered “Class D” PWM sinewave on its primary?
0
How find the optimal frequency of a high frequency transformer
2
Half Bridge with PWM- gate signal problem
1
Why do we not use true sine waves in power inverters instead of PWM?