How can I disassemble an iPhone 4 battery without damaging it?

I would like to measure the power consumption of an iPhone 4 using a source/measurement unit.

On other devices I am able to connect the SMU directly to the +/- battery terminals, using tape to insulate the +ve battery terminal from the SMU's supply voltage thereby replacing the battery with the SMU as power source.

The iPhone battery connects to the rest of the device using the connector shown below. 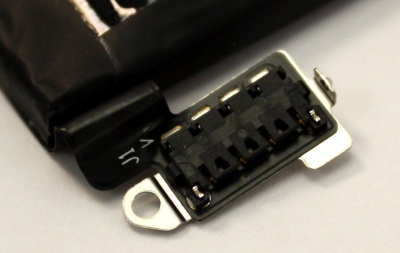 I removed the outer layer of the battery & found that this is part of a small circuit board that is in-turn attached internally to the battery terminals (in blue). 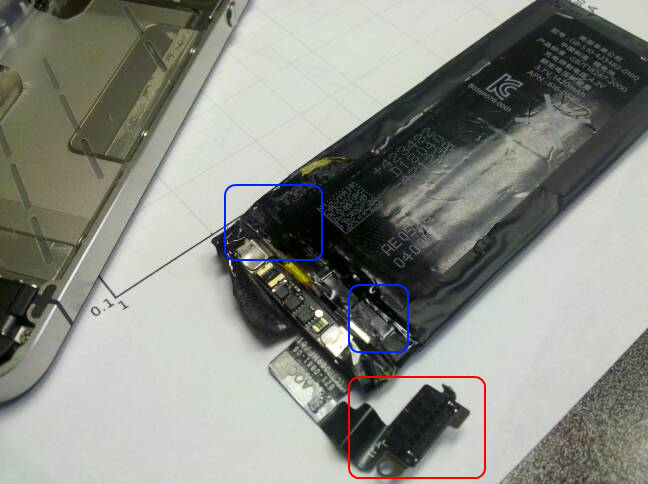 I figured I could snip these contacts and attach the SMU to the circuit board to replace the battery, but in doing so I seem to have destroyed the circuit board (I assume from a short while cutting the contact)

I have two more batteries to experiment with: What method should I use to disconnect the circuit board from the live battery to minimize the chance of damage?

This method assumes that a battery proper with only a 2 wire connection is used. This could be a 2 or 3 cell battery. However, if two or more cells are used and the inter cell connections re brought out you can still use an altered version of this method

Do not short battery leads to each other or from V+ to ground at any time.
Doing so will cause the battery controller to lose power and may also incinerate the battery. Or more.

Method 1. RS&B Will work in most cases.

1b. Just connect new battery across old if not variable.
Batteries will not usually explode or catch fire.
Not usually!.

This method prevents the new battery being electrically connected into the old and minimises voltage surges.

Establish two solderable points in old battery positive lead which are both at battery V+. eg battery and V+ on connector, or strip battery lead in two places without

Cut wire from old battery somewhere between the two solderable points.
The diode is now in series with the battery.
The phone is now running from Vdiode Volts less than before.
It MAY stop at this point but almost certainly wont.

Connect new battery or psu to ground (V-) directly and to V+ via 100 ohm resistors with resistor set to 100 ohms.

The battery pack is is now running from the new battery or supply.

Cut or break or remove V+ wire from old battery to diode.
(Optionally, instead place resistor set to 0 ohms in series with diode and then increae resistor to 100 ohms). Remove diode and old battery and resistor if used. .

Knowing Apple it might very well be a "tamper proof" firmware/hardware mechanism that will shut down the board when battery is disconnected from it. I seem to remember some talk of this when researching laptop batteries and replacing the Li-Ion cells (needing to keep power applied whilst swapping to prevent controller board shutdown) though I am by no means certain.
Google will probably throw some light on the matter if you use the correct incantation.

Edit - had a quick look and managed to find this which seems to confirm this protection may indeed be present in many laptop batteries (2nd paragraph)
If you try again with another battery I would maybe follow the the procedure described regarding applying a secondary source through resistor to keep power present at all times.

Not the answer you're looking for? Browse other questions tagged batteries iphone power-meter short-circuit or ask your own question.

1
How can extend the cable distance from a condenser microphone to the ADC without loosing fidelity?
0
Potential problems with paralleling a jumbo battery to iphone internal battery?
0
How much energy can the iphone output into an external device?
0
Charging batteries while powering device
0
How to calculate voltage drop with internal resistance and load values
0
Identifying risks working with motorcycle wiring