How on earth shall I design the ground planes for mixed signal circuits, split or not? 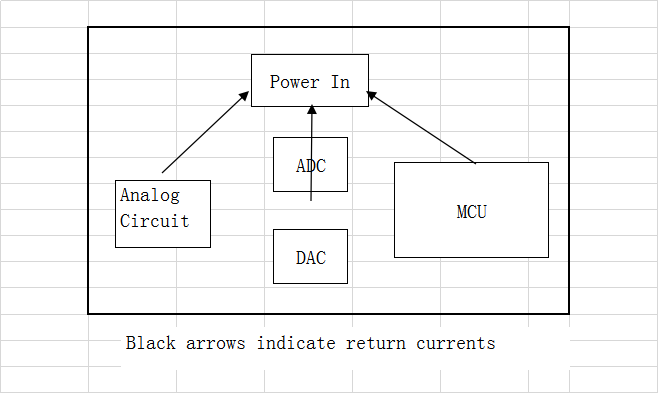 There are four layers, including top, power, ground and bottom.

My way of grounding:

However, we recently hired a very professional consultant company to help us design a newer version. They design in a different way.

They cut the ground plane into two: analog and digital. And connect the two planes with 0 Ohm resistors when necessary. They are very professional, so I start to think in their ways.

What I think their way could be good: Without cutting, the digital return currents still have the chance going into the analog ground.

What I think may be bad: There could be several connections between the analog ground and digital ground. There would be ground loops and become antenna.

Could I have comments here?

Some time ago, I answered a similar question here.

The first sentence, which is an echo of commenters here is:

The Maxim application note is targeted at mixed signal integrated circuits, where, unless you take precautions, the digital and analogue currents will overlap, and the usual method of managing this is to tie the effective digital and analogue grounds is at a single point (usually beneath the device).

Understanding how the currents move in the plane(s) is the key to good signal integrity, and the general rule of putting the sensitive circuitry furthest from power and the noisy stuff close to it is a good rule of thumb, but every design needs to be analysed for clean power and grounds (the return path which is the 50% of the power that does not seem to appear in a schematic but is just as important, of course).

Under very limited circumstances, a split plane may be appropriate. There is a trade-off of effort vs. return on that effort. In an ordinary mixed mode system, I would not split the planes.

The example was a specific design that had very high eddy currents on the LEDs where it was easier (and appropriate) to split the planes to prevent those eddy currents from inducing into the other LEDs. The grounds were tied together at the primary power inlet to the board.

I think my primary point on where things are placed is that sensitive devices should not have return currents from other devices under them. In a system with high speed logic and ADCs, I would put the ADCs at the end of the power path so that the digital returns cannot interfere with the measurements.

Perhaps I had not made that as clear as it could have been.

Splitting planes 'as a matter of policy' is almost always bad. It means the people advocating it can't think their way through what needs to be done, so fall back on rules of thumb. Zero ohm resistors connecting regions may be useful to save the perpetrator's faces when in last-minute hacking to reduce problems, these links are randomly connected and removed until hopefully the circuit scrapes into spec.

Just because you write '0v' on a circuit diagram doesn't mean it's ground.

Trace the signal currents 'out' through the circuit, and expect the ground current to return on the ground layer parallel to the signal path (this is Maxim's path of least AC impedance). If it can't, because of a cut across the ground plane (I hate those ground flood fills, that then later get cut into lace-curtains by added signal tracks), then you have a problem. I like to route my grounds, as traces, parallel to my signals. Soon, those traces will start to form loops. Each time a loop forms, that's a good point to evaluate just what current path through what ground impedance may be presenting a small voltage to somewhere else. If you have a problem with these ground paths, then you change your floor plan now to untangle them. It's easier to do it piecemeal at this stage, than route the whole board and then try to untangle it. Eventually, the whole ground gets filled anyway.

If a high current curcuit dumps current into one end of a trace, any other circuit sharing that trace will see some of the stray voltage developed across it.

That Maxim link is one of the clearest guides I have read for what to do. However, be warned, it is very difficult to keep your head and apply it, with a lot of ICs on the board, and some expensive consultants snapping at your heels and wining and dining your boss to win him over. Remember, professional means they take money for what they do, it doesn't unfortunately mean they understand what they are trying to do. Good luck.

Not the answer you're looking for? Browse other questions tagged pcb-design ground grounding ground-loop ground-plane or ask your own question.

0
Can I place a regulator in this way?
5
For Multiple ADC circuits PCB layout grounding, why is "single point ground" important?
1
Where do the return currents go for a MCU with multiple Vdd and grounds?
2
PCB plane cuts for audio paths in mixed-signal device
0
Does placing digital circuitry between the regulators and analog circuitry cause grounding problems?
1
How to create a mixed signal pcb
2
How to connect four different ground planes in the same PCB?
3
Split digital ground planes
7
What's the best ground topology for this mixed signal board?
3
What's the correct grounding concept in this mixed-signal microcontroller design?