I am working with an RF transformer. I would like to understand the voltage rating of this transformer. How can I do that. The only voltage related information ios the inter winding isolation of 300V. What does that signify please ? The part number is AE458RFW01B1SZ and the screen-shot of the datasheet is as shown below - 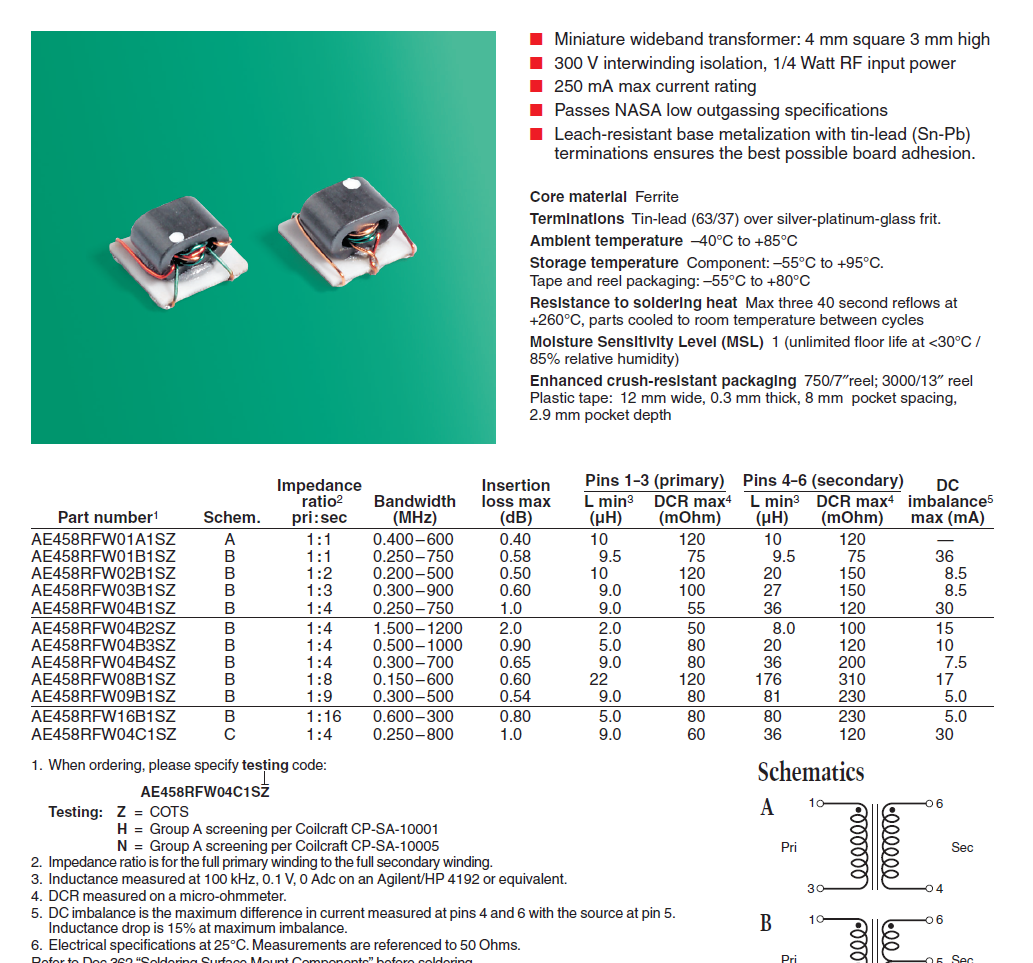 The other thing could be the derivation of voltage from the wattage.Wattage is 0.254W rating and a current rating of 250mAmps. This makes the max voltage as 1V, which is ridiculous.

It's solvable but not directly....

Start with the maximum DC imbalance current of 36 mA. This figure is all to do with possible core saturation. A mismatch in ampere turns on the primary compared to the secondary severely bumps up the core flux density.

The 36mA figure is telling you what the magnetization current is that will start to cause problematic core saturation. Magnetization current occurs irrespective of any load but it's easier to calculate things assuming no-load on the secondary. It's worth noting that load currents in the primary and load currents in the secondary produce exactly opposite levels of ampere turns so they totally cancel out leaving the mag current.

At the lower limit of operating frequency (250kHz) the reactance of the primary (or secondary because it is a 1:1 device) is this: -

36mA is the peak current that causes saturation and the sinewave equivalent is \$\sqrt2\$ smaller than this at 25.5 mA RMS.

This is the voltage that should not be exceeded when operating at 250 kHz or you will risk core saturation issues irrespective of load or no-load.

Clearly at 250 MHz you could apply a ridiculous level of voltage and this is barred by the isolation voltage limited at 300V - in other words you have to put a cap on how far you can go.

Trying to calculate this from the maximum power figure is problematic because if the load is 50 ohms and the power is 0.25 watts then the voltage would be 3.53 volts RMS (10 Vp-p)and this would cause major saturation at the low frequencies all the way up to ~2.5 MHz with or without a load.

I've looked at it from a standpoint of what would cause the core to saturate when driving an open circuit and assumed that the maximum RMS current in the primary is 25.5 mA RMS. If you factor-in load impedance (hence power) then the power formula will prevail at some point in the frequency spectrum but for the low frequencies it is the saturation current that dominates.

The inter-winding isolation voltage is the maximum difference in voltage allowed between the primary and the secondary.

The maximum allowable RF input voltage will be: