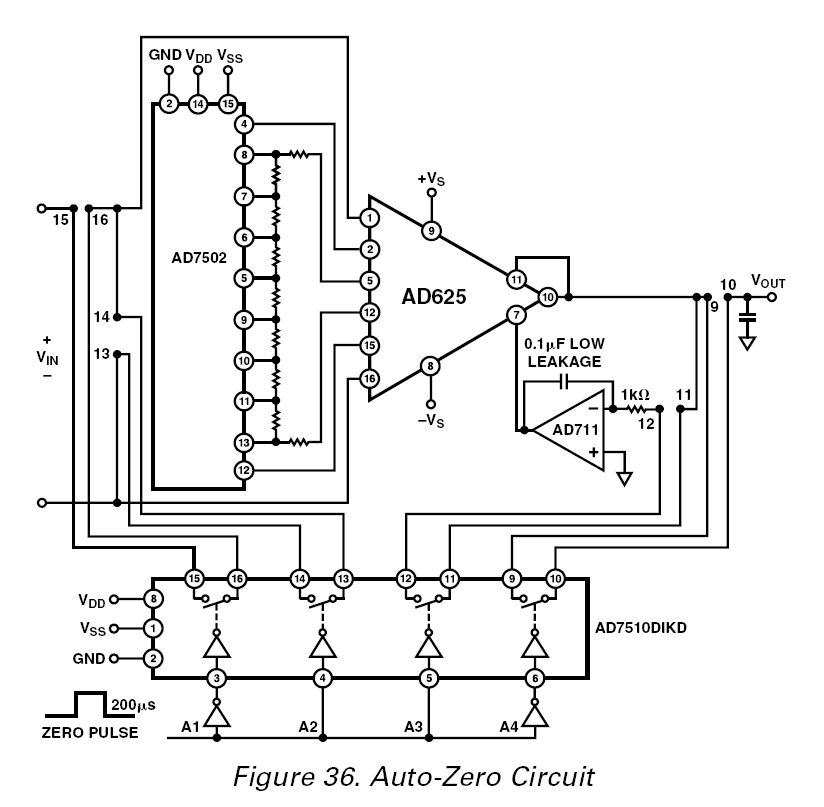 But surely the op-amp is configured as an integrator not as a sample and hold? or am I missing something. Is the data sheet just plain wrong?

The circuit indeed is an integrator. It integrates the non-zero output of the opamp and immediately also offsets it, until the opamp outputs zero, at which point the integrator's output won't change anymore.

As you can see the output signal will remain constant once the input is zero.

When A3 is open the AD711 will 'hold' the output value (in reality it will slowly move away from the initial value due to leakage and bias currents, like any real analog S&H). There will also be a slight transient when A3 switches due to charge injection, but that won't be many volts because 0.1uF is large compared to the charge injection of the analog switch.

When the auto zero loop is closed, the output is disconnected, the op-amp acts as an integrator with a time constant 1K * 100nF, the input is disconnected from the outside world and shorted, so it will be very close to 0uV. The output of the AD711 changes to drive pin 10 of the AD625 close to 0V (same as its non-inverting input terminal give or take a bit of offset voltage). If the AZ loop is not given enough time it will at least drive towards zero, and will get closer every time.

Edit: Ignoring the gain factor between the AD625 balance input and output, the time constant is 100usec. If that gain factor was 1, the output would approach zero exponentially Vos = \$V_0(1 - e^{t/\tau})\$ (ignoring offset, noise) where \$\tau\$ = 100usec. So the remaining offset voltage after each pulse would ideally be reduced by a factor 0.13:1. If we assume it started with an input-referred offset of 5mV, then the offsets would ideally be after each 200usec pulse:

There are modern 'zero drift' amplifier chips that do things like this internally and (almost) transparently to the user, give or take weird stuff like enormous (relatively speaking) current pulses coming out of the inputs and strange noise peaks at certain frequencies.

Not the answer you're looking for? Browse other questions tagged instrumentation-amplifier sample-and-hold or ask your own question.