I'm designing a high-frequency transformer, EE type core, with one primary, and a center tapped secondary.

As the secondary current is relatively high and the window area is small, I will use copper foil.

So reading this paper, I plan winding the transformer this way to reduce flux leakage so provide a good mutual inductance. 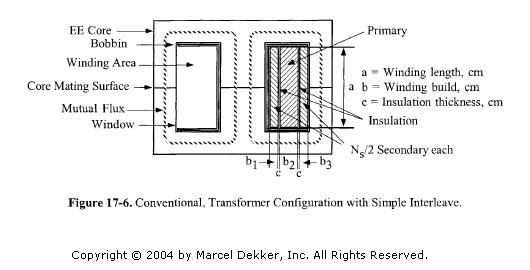 (In the image above, just swap primary and secondary).

Question As the secondary have two windings (or one winding with a center tap), what should be the best method to wind it:

This will put half the secondary winding next to the center leg of the core, and the other half more far.

Interleaved: The start of the center-tapped secondary wound as two insulated foils, that is the two secondary taps interleaved.

Does the the far half winding will have a flux imbalance compared to the first half (so the rectifier will get two different power) or the primary winding on the outer will compensate for this? So, its worth interleaving the secondary taps?

I answer your question following this, but first I feel compelled to address general winding strategy.

It's important to understand interleaving in terms of winding structures, rather than entire windings. Now, what is a winding section exactly?

A winding structure is always a pair made up of some number of primary and secondary turns. They are separated by a boundary where the magnetic field falls to 0 between the winding layers. You want to minimize the energy stored in between these windings, which means minimizing field generated between two coupled windings by minimizing the area. In the first (and correct) interleaving, you have each winding directly adjacent to its partner, creating two winding sections. P1-S1 is energetically favorable, the flux falls to 0 between S1 and S2, and the second winding section is S2-P2. P1-S1-0-S2-P2. They interact with each other with minimum energy stored between them and P1 never needs to stretch out its field all the way to S2, because it already has S1 right next to it.

In the incorrect interleaving, you have two broken winding sections where you interleave without the field falling to 0 in between, so you're just forcing a larger field path than necessary. The primaries must partly transfer energy to a further secondary than is necessary, which is going to increase the energy stored in the mutual inductance, and increase leakage. There is also no point in interleaving two halves of the same winding with itself. Regardless, never break up winding sections like that. The first variation gives you both a primary and secondary center tap, it's fine as is.

BUT, you can attempt something more complicated if you really want to and the trade offs are worth it to you.

There is marginal benefit to performing a level 2 interleaving, which has 3 winding sections instead of two. This divides up the layers as such: P-S-S-P-P-S. There are 3 sections here instead of two: P-S-0-S-P-0-P-S. This arrangement will lower leakage even further, but marginally, and you pay for it with increased primary-secondary capacitance. It's up to your judgement as to whether such interleaving is an improvement or not for your application.

It is also important to implement level 2 interleaving correctly, as it is frequently done incorrectly. The field must be equal in all 3 winding sections, and the double letters are explicitly there to signify 2 layers or twice as many turns. Don't wind P-S-P-S, wind P-S-S-P-P-S. Tap at N/2 for a center tap, though it will be towards the end of the double wide S section which might be a tad awkward to construct (or not) depending on the situation.

Now, on to flux balancing...

All transformers with a center tap will have slight unevenness. Correctly pairing winding sections and well shaped core (which any ferrite core should already be) goes a long way, but you'll never have perfectly balanced flux on a tapped winding. What matters is how it's being driven however.

Having a tapped secondary doesn't imply anything about the primary. Loads do not drive the transformer, and loads cannot cause flux imbalances. What does happen is that the voltage from the center tap to one half of the secondary will, as you guessed, be slightly higher voltage than the other half. This is true for any transformer. In general, it's not a big deal because you should be properly filtering the output, so that slight voltage difference will ultimately just present as a tiny increase in voltage ripple. The power delivered to the rectifiers is not dependent on this. The power delivered to a rectifier is I*Vf, Vf being its forward voltage. This is highly temperature and diode dependent, so your diodes were never going to be even to begin with.

If you meant the power delivered THROUGH the diodes, then that has nothing to do with the transformer. If you have a resistive load, then yes, one diode will have slightly more power pulled through it due to the resistor drawing more current at the slightly higher voltage it will peak at. Other loads will behave differently. What will happen is there will be voltage ripple and if the load draws more power when the voltage is slightly higher than lower, yes, one diode will deliver more power. Modern loads often employ further DC/DC regulation, and will (roughly) behave as constant power loads, so lower voltage will result in higher current draw, keeping power constant. It really doesn't matter that much. Just use voltage regulation and an appropriate output filter.

Center tapping is a bit more troublesome if it's on the primary. In this case, the winding is driving the transformer, and flux imbalance is a very real issue. Every center tapped primary is slightly unbalanced, so the short answer is you must use current mode control when driving any transformer in a push-pull topology (which universally require a center tapped primary). If you don't and try for purely voltage mode control, you will have a volt second (flux) imbalance that will build until it pushes your core into saturation. No bueño. So don't do that.

Hopefully that gives you enough information to decide what suits your specific application best. Also, magnetics will start to make a lot more sense with experience. It can be difficult to understand the fairly dense papers like the one you linked, but I recommend revisiting them after you've worked with magnetics a bit more and feel a little more confident about it. If you do, I think you'll find that suddenly, the paper makes much more sense and is easy to understand, and THAT is when you'll actually get some real benefit and understanding from it. Magnetics really isn't very hard, it's just...different. Good luck!

Not the answer you're looking for? Browse other questions tagged transformer switch-mode-power-supply electromagnetism winding or ask your own question.