Can I connect two OPA541 (or similar power amplifiers) in parallel to get higher current output?

I have a requirement for current sourcing about 30A and need to use a power amplifier for other reasons. Is it possible to club two OPA541 (each with 10A max) devices in parallel to achieve this? What considerations should be taken? Any gotchas?

The output of the two amplifiers is going to be a 50Hz sine wave. Inputs for both come from the same source. What's the best design to achieve this?

Yes you can and I've done with lower power OPAs (in order to preserve low board height etc.) The main gotchas are: 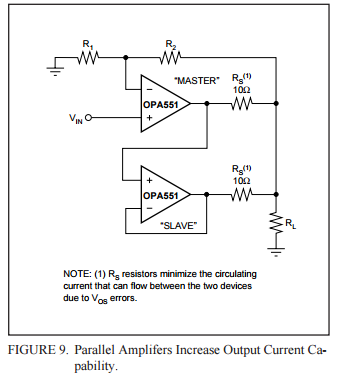 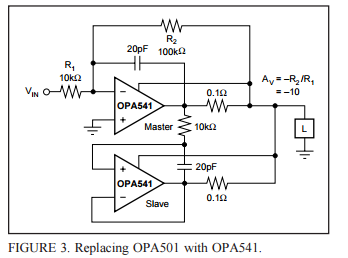 (The capacitors in the latter circuit are there for stability improvement, almost certainly, see below. The odd looking connections from the output to what might be misinterpreted as a power rail of each opamp are actually going to the current sense pin[s].)

One more slight variation on this theme is found in the OPA549 datasheet. In this (also high-power, 2x10A) case they also use only 0.1ohm series resistors but they close the master's feedback loop locally, probably because the small values of the series resistors don't cause a significant voltage drop.

Other resources worth reading on the topic are this TI blog post and the APEX note AN-26; the latter details more advanced issues like stability/compensation.

In general the first consideration is what happens if one power amp has a (slightly) different output level than the other one. Will there be a current flow from one output into the other one? If yes, will this damage one or both components?

It is usually better to just use one op-amp and use a discreet FET, Transistor or IGBT for the power part.

2
Can I use a power amplifier for power stage of a pure sine wave inverter?