A few high-reputation members have disagreed on this in the context of other questions, so I thought I'd post it as a separate question.

Question: Is the NPN BJT in this circuit configured as common emitter or common collector? 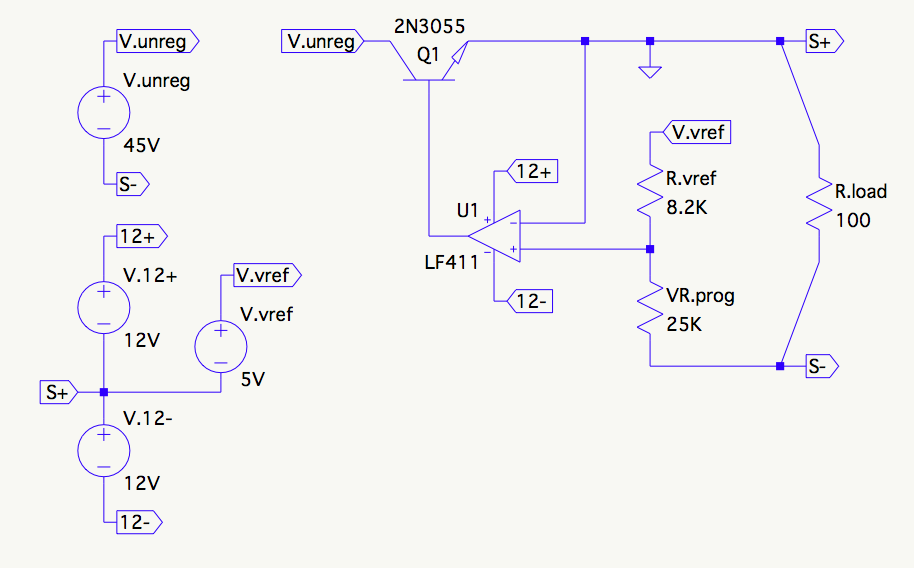 Note that, perhaps unusually, the S+ node is ground and the S- node is the output. 'S' here stands for sense, but for present purposes can be interpreted as \$V_{out}\$.

This is part of an DC Bench Power Supply circuit, and looks like this at the block level. Note the op amp-ish looking symbol represents the entire amplifier, not the LF411 op amp specifically: 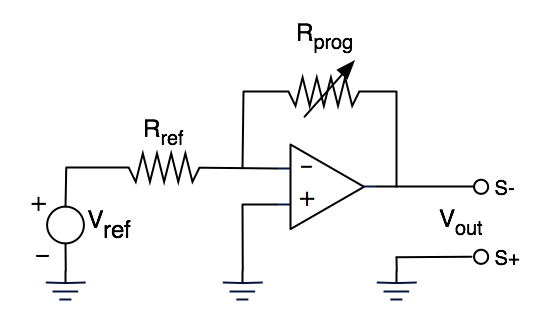 Abstracting out the op amp to a signal voltage source, I believe these two are each alternate layouts for viewing the circuit. I've purposely laid them out in forms reminiscent of classic common emitter and common collector (emitter follower) respectively.

I don't want to spoil the fun for anyone, so my own conclusion is in the spoiler bar below. Roll your with your mouse to see if you like. This represents my best working conclusion. I still have a shred of doubt in my mind :)

Answers should state the rationale for their conclusion. I think one of the cool features of conundrums like this is it forces one to dig for what is essential in the form, not just recognize it in classical form :)

I wasn't going to answer this question, since I had already been through it with an earlier question from the OP (scanny). But, it's turned into such a mess, can't help it. I mean, 1 right answer out of 3 so far? How is this circuit so confusing? We'll get to that, but first some history.

When I first saw this circuit I wrote an analysis of it as an emitter follower. I didn't see the ground at first, since it was cleverly concealed in plain sight between the U1 inverting input reference and \$R_{\text{load}}\$. Then in a comment scanny suggested that he thought the circuit was common emitter. What's he talking about? I looked at the circuit again and did a mental experiment varying node voltages and thinking about what that must mean, and everything still seemed to act like an emitter follower, so nah. But scanny had additional observations about the behavior that didn't make any sense for and emitter follower, but made a lot of sense for a common emitter. So, I redrew the circuit from scratch to look into things further. After redrawing the circuit I realized that I was dealing with an idiot: Me at 1am.

Here's an annotated version of the circuit I got on redraw: 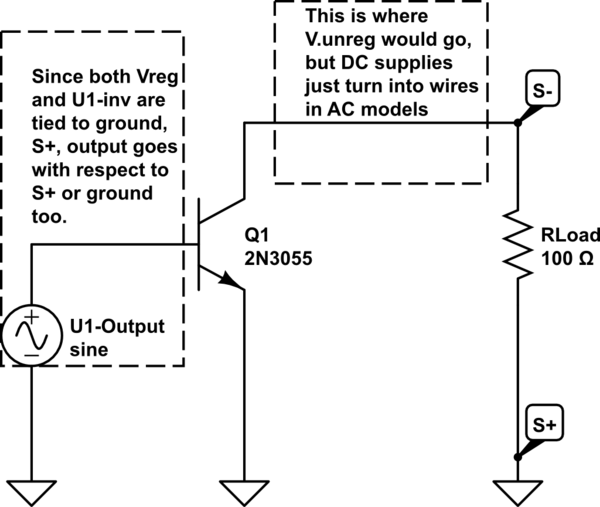 Redrawing the circuit as a small signal AC model made me reorient everything, and really think about V.unreg, V.ref, and where all of the grounds were. Resulting circuit is clearly a common emitter.

Important to realize in the circuit:

If you compare the change of voltage across \$R_{\text{load}}\$ seen when U1-output is modulated in this circuit, to the original circuit, you'll see the two circuits do the same thing.

But, why has this circuit been so confusing?

Although, the original schematic is well drawn, the orientation of Q1 and relative placement of V.unreg and \$R_{\text{load}}\$ are very like one would expect for a emitter follower power stage. Emitter follower topology is also expected in an application like this (usually, since common emitter has many more stability concerns).

It's a kind of framing. People, by habituation, get spring loaded to see an emitter follower first. Once seen that way, there is denial of other points of view.

Here, let's re-redraw the circuit, in another different, but equivalent way. 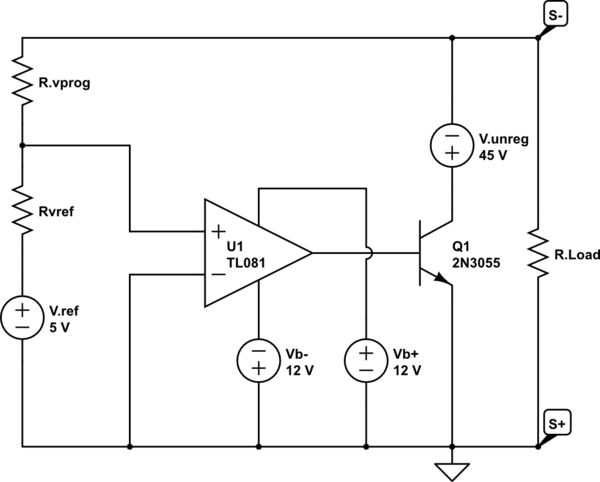 It's pretty clear that everything is referenced to S+, V.unreg floats, and the voltage at S- is modulated by Q1-c through changing the common mode voltage of V.unreg.

Is the opamp power supply referenced to S+? If so the BJT is as you say in common emitter configuration and you will have problems stabilizing the feedback loop.

Here is the relevant part of the circuit re-drawn: - 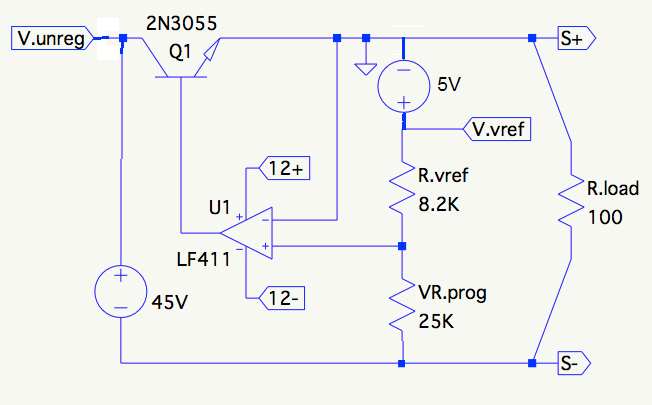 There is 45V on the collector relative to S-.

The emitter voltage does what the op-amp output does (-0.7 volts lower) i.e. it is the control element and it's an emitter follower.

If I drew the the circuit with S+ being the output and S- being called "ground", would anyone disagree that this is a common collector: - 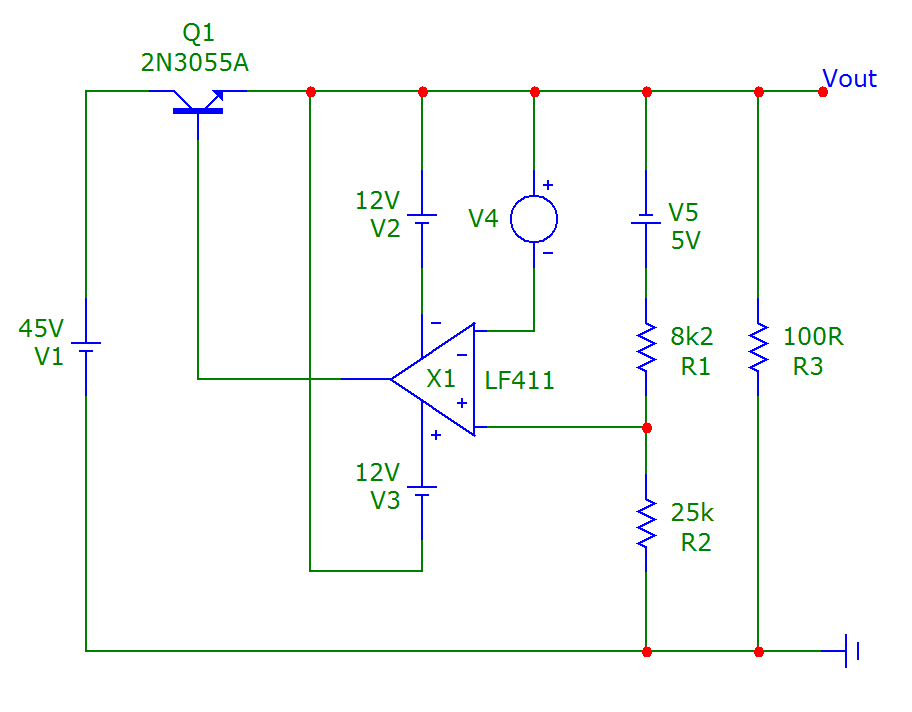 Have I made an error in this conversion? My simulation (using V4) as stimulus gives me the results I would expect for a common collector but unfortunately my simulator is giving daft results if I ONLY swap the ground and Vout labels so this is annoying.

Here are the results as per the circuit above: - 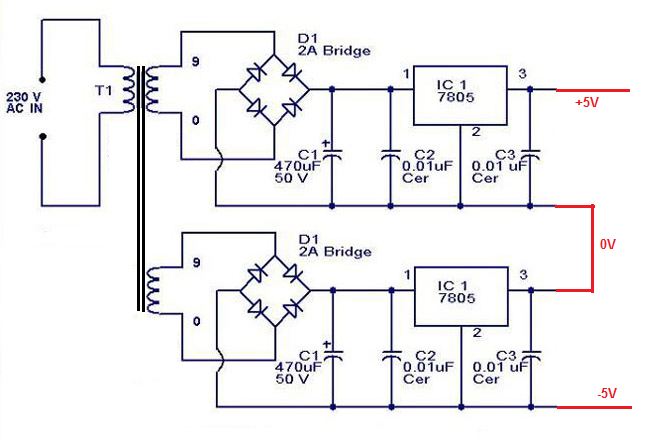 Does it turn the bottom 7805 unstable? This is a perfectly valid circuit connection and on fig 17 in the Fairchild data sheet it shows a similar example: - 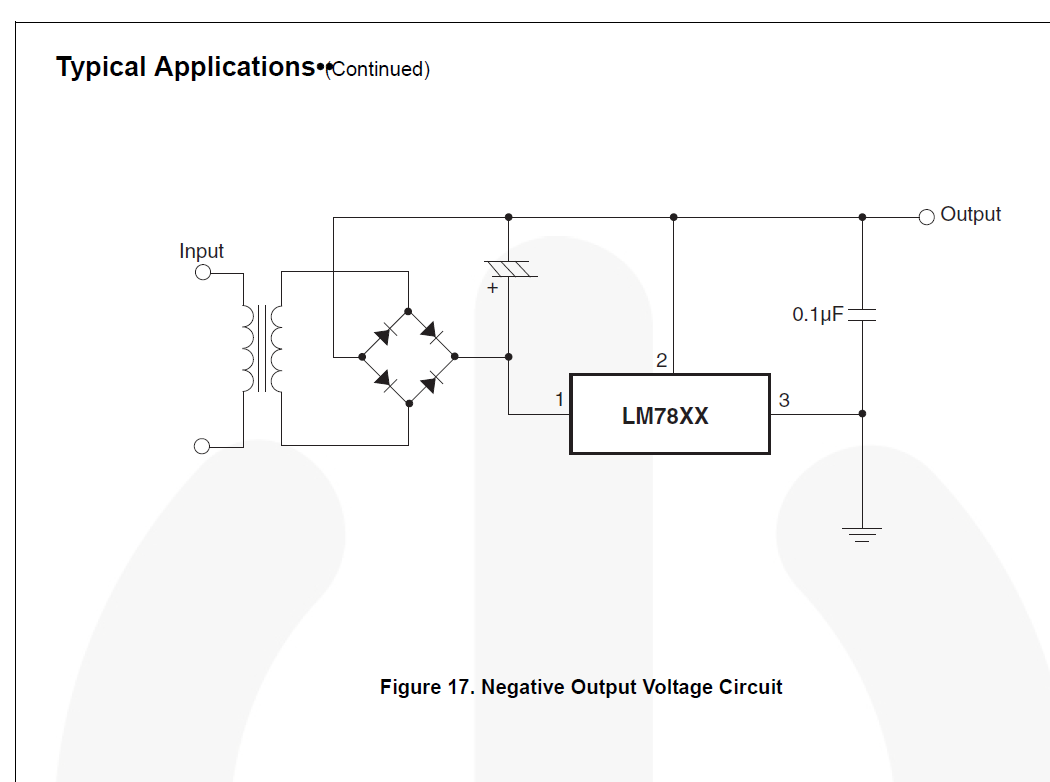 There is a lot of good work suggesting it is a common emitter so I'm beginning to feel I may have missed something here?

If you draw the AC equivalents right and leave off most of the biasing, CC and CE amplifiers look almost identical. (Remember, ideally no current flows through the signal source!) 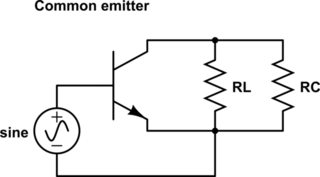 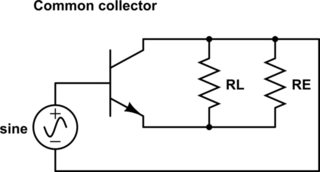 But of course, they're not identical. The DC biasing matters too! Remember that in the linear region, \$V_C > V_E\$. The AC model alone doesn't guarantee that. Looking at the direction of the DC+AC current flow makes the difference clear: 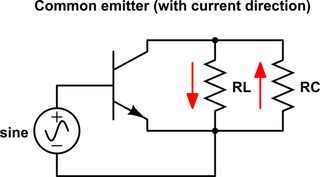 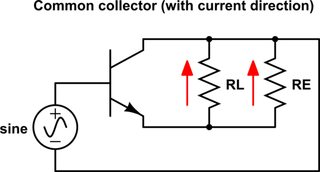 Regardless of how you draw it, your emitter is connected directly to the high side of the output. That makes it a common-collector amplifier (emitter follower).

EDIT: I'm going to simulate this:

I don't know, guys, this looks an awful lot like a CC linear regulator to me. The reference voltage generation is weird, but I don't see how that changes the basic topology. There's a high unregulated voltage on the input, a lower regulated voltage on the output, and an NPN transistor in between. S- is the common node that's shared between input and output, and current flows from S+ to S-. Negative feedback is taken from S+. How can that be anything other than an emitter follower?

Maybe I'm missing something. I'll try it again with the op amp circuit replaced by a DC voltage source (Vctrl). The question now is what to use as the source ground? I'll try S- first: 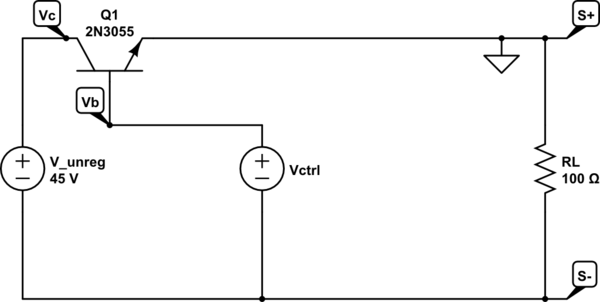 I swept Vctrl from 0V - 47V, and saw the behavior I'd expect of an emitter follower. Now I'll try referencing the source to S+: 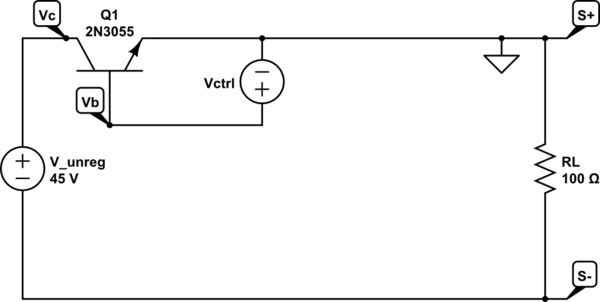 If I take the view that I'm controlling \$V_{BE}\$ with the load on the collector, then it starts to sound more like a transconductance amplifier than any of the usual voltage amplifier topologies. I guess that's what you'd expect from a bare transistor circuit. But the output voltage is constant...

I'm missing something, but I'm not sure what it is.

Not the answer you're looking for? Browse other questions tagged power-supply amplifier analog bjt or ask your own question.