How to find out if electrical outlet ground is working?

Just want to make sure my outlet's ground is working. How to do that?

UPDATE: My main aim is to test resistance of anti-static wrist strap, but since I know it works by testing it with multimeter, I now want to be sure wall socket's ground works as well. This is why I asked this question.

Maybe I can test wall socket's ground with a multimeter?

I use a digital voltmeter and measure three ways.

If the earth is open, you won't see the line-to-earth voltage on the meter.

This is essentially replicating the functionality of the circuit tester gadget described elsewhere in the thread.

I don't know how things are wired in Israel, but here in the US the neutral is tied to ground at the breaker panel. For most cases (exception below), that means neutral and ground are equivalent at the outlet, except that neutral is intended to carry the return current whereas ground is intended for a safety return path when something goes wrong. The ground might be tied to a metal chassis, for example. Normally that is a open connection, but if something inside shorted to the chassis, the current would be carried by the ground lead instead of a person touching the chassis.

Therefore, you can test if the ground is working by very carefully connecting a small test load between the hot lead and ground. A small lightbulb is ideal for this. The lightbulb should light just as if it were connected between hot and neutral.

Now for the exception. Since there isn't ever supposed to be substantial current on the ground line (think of the chassis, just little capacitive coupling and some small leakage perhaps), current on the ground line indicates something went wrong. This can be exploited for additional safety by shutting off the hot line when ground current is detected. This is called "ground fault detection", and you can get "ground fault" breakers that have this built in. Around here at least, you can also get outlets that have a ground fault interruptor built in. These are often found in bathrooms and other places where the human user is more likely than usual to be connected to ground.

The lightbulb test described above will therefore not only test the ground lead, but by putting current on the ground line it will also test any ground fault interruptor on the line. If the bulb lights normally, then you've got a working normal outlet with a good ground line. If the bulb lights for a fraction of a second then goes out, you have a working ground fault breaker somewhere. In that case, you will have to reset that breaker to get power back at the outlet. If the bulb doesn't light at all, then you have a broken ground lead, which should be taken care of promptly.

With a socket testing plug.

In the UK there are many, and they look like this: 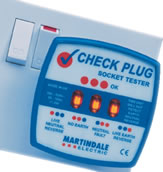 I don't know which country you are in, and what socket type you have, but check your local hardware store - they may well stock your local equivalent.

10
How to know that I am grounded with an anti-static wrist strap?
1
Child-Safe setup for ESD protection environment on desk
1
Can a digital multimeter damage a powered circuit when measuring resistance?
2
ESD Anti static mat Grounding and AC volts
11
Anti-static mat connected to earth directly or 1E6 ohm resistor?
3
What is a single socket to ground-only plug adapter for electrical outlets called?
3
ESD Mats failing with constant monitoring system
2
How the (earth) ground works?
3
MAX608 boost converter stopped working, the OUT pin is shorted to ground
1
Multiple Arduinos toasted, could it be the ground?