how to design a differential op-amp for sensing a ac current?

I tried to design a simple electronic load, but I would like to amplify the the voltage across the sensing resistor with gain of 20. Then I can apply a sine wave reference to have a current between 0-5 A and control it based on the reference. I tried to do that based on the figure but it doesn't work. Someone told me that this structure for differential amplifier is for DC not for AC. can you help me to improve my design? I have an access to a limited range of op-amp in the lab. How can I use them for this purpose? 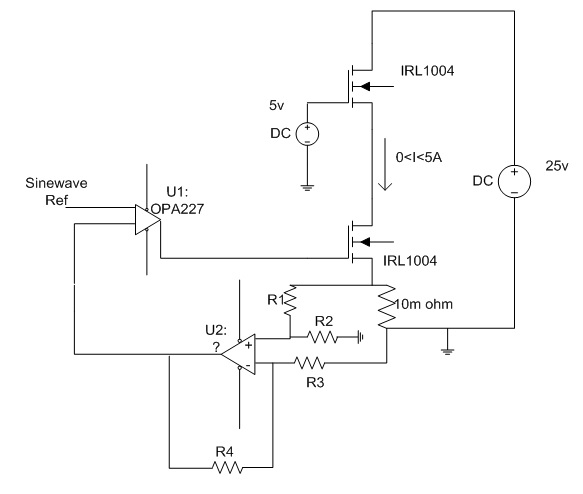 I would be inclined to use something closer to a 0.1Ω (100mΩ) sense resistor for the reason @Golaž mentions, and dispense with the second amplifier (U2) altogether. Introducing a gain of 20 (26dB) into the feedback loop will cause you trouble when it comes time to stabilize the main op amp circuit (U1). I expect if you built this one up it would oscillate very badly.

There will be a voltage drop of 0.5V across \$R_{sense}\$ at full load, but unless you're planning on using the load with very low source voltages (like <1-3V, depending on the characteristics of your MOSFET), I don't expect that will be a problem.

I don't get why you're using two MOSFETs in series, with the top one apparently just turned on full. Perhaps you could elaborate on that point. If your objective is to increase the power handling capability, you probably want to run them in parallel.

I designed a similar circuit here with help from several members of this site. The various questions I asked in the process and the very helpful answers I received are linked from that question.

I was also designing for an arbitrary signal input control, basically controlling the load with my signal generator. Mine works very nicely for sine, square, ramp/triangle waves up to roughly 250kHz, all of which are useful for characterizing a power supply, which was my purpose.

You'll probably want to state your bandwidth requirements, because it becomes a key factor once you get up to about 100kHz and beyond. The effective gate capacitance of the MOSFET is a key parasitic as you'll see if you look through the series of questions linked from the above.

Not the answer you're looking for? Browse other questions tagged operational-amplifier current electronic-load sensing or ask your own question.