What's the simplest circuit for an inline latching power switch?

I have a 12V lipo going into a step-down converter powering an Arduino. I'd like the Arduino to be able to completely power itself off (not simply go to sleep). However, neither the 12V lipo nor the converter have any built-in means of being controllable from a digital pin.

I've found several examples of latching power switches, but they're all relatively complicated, and assume the switch is incorporated into the regulator. I don't want to modify any components. I just want to put a "box" in between the 12V lipo and converter, wired to an Arduino pin, which will break the high-side when the pin goes low.

What's the simplest way to do this with the minimum of components?

Assume that the Arduino's I/O has gone low.

Q2 will then go into cutoff, and Q1's gate will be pulled up to BT1+ through R1.

That'll force Q1 into cutoff, disconnecting BT1 from the converter's input, killing both the converter and the Arduino.

When that happens, the Arduino's output will be floating, and R2 is used to make sure Q2's gate is held low until S1 is pressed.

When S1 is pressed, R1 and Q1's gate will be pulled low, turning Q1 ON, which will connect the converter's input to BT1.

That'll power up the converter, which will then supply power to the Arduino.

The Arduion's I/O will then go high, turning Q2 ON, which will connect Q1's gate to ground, latching Q1 ON (even after S1 is released) until the Arduino's I/O goes low, turning everything OFF AGAIN, which will start the cycle anew. 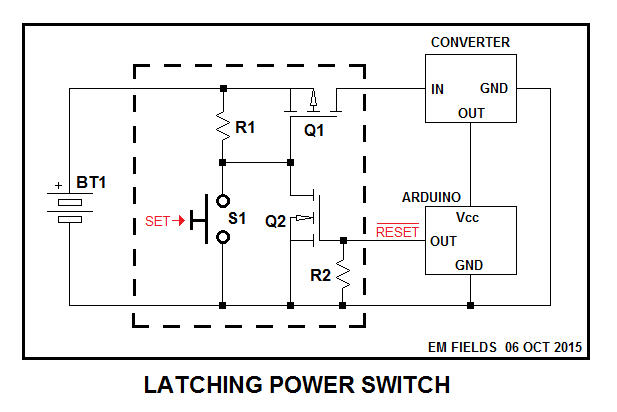 Not the answer you're looking for? Browse other questions tagged power battery-operated latch or ask your own question.

1
How to restrain this soft latching power switch from eating too much current?
1
Issues with Latching switch using push button

4
Pulling power off a battery stack at different voltages
15
What are the effective power limitations of the flyback converter topology, and why?
4
Buck Converting Voltage, to Switch Original Voltage
0
Is it good general practice to avoid powering components from the 5v pin on an arduino?
0
Choosing external adapter voltage to power Arduino & Relay
0
Do I need to protect buck converter when switching to alternate power source?
0
Momentary Switch NAND Latching IC Burning and (Possibly) Faulty Logic
0
Wiring case fans in parallel to a USB cable with an inline switch, still spins slowly
2
To power an arduino that isn't always on, should I connect a switch before or after a buck converter?