Tap signal from TDA2822L, convert to line and instrument level

Essentially, I want to connect a really cheap musical toy with no outputs (other than a speaker) to line or instrument level equipment (for the full details, please refer to my previous question). The amplifier chip is a TDA2822L from Unisonic Technologies, driving a single 2.5W 8 Ohm speaker in the following arrangement (only connections for pins 1, 3 and 4 shown): 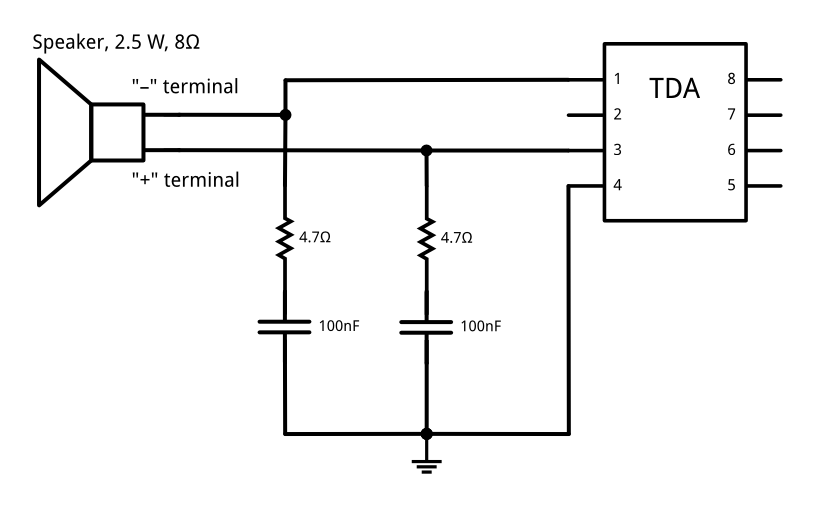 (this follows the "bridge" configuration described in the datasheet, with the exception of reversing the order of the resistor and capacitor)

The IC runs on a 7.5 VDC supply current, provided by five AA batteries. Using fresh batteries (providing around 8 volts unloaded), setting the volume at maximum, I measured around 1 VAC RMS across the speaker terminals. I expect this to be a somewhat inaccurate reading, as the device is not capable of producing sustained tones, so I had to use a backing rhythm for measurement. Furthermore, I found that the multimeter I used (an older version of the VC820-1) has a fairly slow sampling rate, so it might have missed some peaks. With a reasonably safety margin, I think it's safe to say that the output remains below 1.5 VAC RMS.

I want to tap this signal and send it to a line level output, as well as an instrument level output (only one at a time, selected by a switch). I have a fairly solid idea of how this circuit should be assembled, but I am uncertain on a few points.

If the above simplified schematics above are acceptable, I will submit a final circuit design for feedback.

Fluff has covered it pretty well. I would make the following suggestions:

TLDR version: Start with a 10K pot set to 1K from ground.

I just saw the bridge part (which wasn't in the old question). That means the output is taken out of phase from the two amps inside the TDA, so the max level it could reach is 2x the supply rail, i.e. 15V DC (ignoring that it can't swing all the way to rails).

If you're going to use an attenuator (pot on the output) anyway [your schematic is conceptually correct by the way], start with a larger-value pot, say 10Kohm [and you can forego the series resistor in that case at least for initial testing]. You'll get less current that way so won't need a [physically] beefy pot or worry about its wiper burning out. Pots have a power rating, check datasheet etc. The dinky ones can't handle more than 100mW dissipation typically. With a 10KOhm pot at 15V the most you cold see dissipated is 22.5mW [worst case being DC].

Initially I'd set the pot to 1Kohm (from ground), so taking just 10% of the voltage to the next stage. Your next stage is probably going be a mixer console which has its own [line-level] amplifier[s] anyhow. Remember that our perception of loudness is based on a an exponential scale (relative to the voltage/level), so even if you reduce the toy's signal to 1% of its original level, you'll still be able to hear it. And the mixer can [and does] reamplify this. Crank up the toy/instrument level later if necessary; higher level from the toy's amp usually means less noise (relative to signal) going on the wire to the mixer.

It's possible that this toy might rely on its own amplifier distorting significantly for its "signature" sound. In that case you may find out that with the [much] lower 10KOhm load it may sound rather different (never mind different speakers). If that turns out to be the case, you could switch to a lower ohmic-value pot (but capable of sinking more power). But let's not get ahead of ourselves too much.

As for what's a safe level for the mixer or whatever you plug this into... if you stay below 1V or so peaks you can probably use any consumer equipment. Otherwise, like I said in my previous answer, you need to check the specs/manual of whatever you're going to use on the receiving side. A 10K pot set to 1K (from ground) seems a safe bet in that regard as worst case [theoretical] peaks wold be 1.5V [and counting in that's not a rail-to-rail amp etc. you'll probably won't see that.] With this pot setting you could test with a consumer level line-in, e.g. PC soundcard, but beware of accidentally cranking up the pot too much. Also beware that the "mic in" jack on PCs is 100x voltage-amplified though (as is the headset on smartphones)... and it also applies significant DC bias on this line (for an powering an electret concondensr mic). For more production-like dummy-proofing, adding a series resistor as you thought is not a bad idea. But you'll need to determine experimentally what value is needed for limiting the toy's max volume to a usable level but safe depending on the intended receiving equipment and what you can (or cannot) hear.

4
How to capture analog signal from a speaker magnet?

1
Line level with respect to GND
3
Why am I measuring a voltage on the output of an audio amplifier with no input signal?
4
Line-in level from OpAmp
4
How to capture analog signal from a speaker magnet?
0
How to convert 4 wire speaker level output to 3 wire line level
0
Driving line input of a speaker from a differential amplifier, why is the output clipped?
1
What kind of signal processing circuitry do I need to generate a line level output on an Arduino?
1
Converting a headphone output to line level