I've learned that a Triac works as a switch for controlling AC current. Why not connecting the load (L1) and Triac in series? at the position of red arrow? My reason is that a small amount of current will always flows at the direction of green arrow. So, the load will always consume power and I don't think it is a good thing. Am I right?

Also, I don't understand the importance of DIAC. Would you give me a quick tip (information) about it? 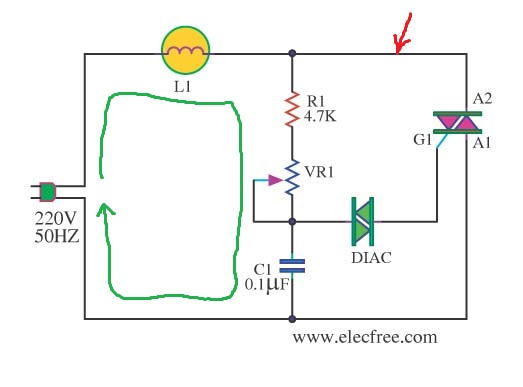 With the circuit as it is, the load does always consume power. This is not a good thing, it means that the load needs a minimum wattage to stay 'off'. However, it's not too bad a thing. It's made even less bad by most triac light controls having a real switch in series so they can be turned off. The triac control is intended to replace the switch in the wall, and there is no way to put the load where you indicate without rewiring. Rewiring would be a bad thing!

As for what the DIAC does, it's a vital part of the operation between the slow charge of the capacitor and the TRIAC needing a good kick to get it conducting. Look up a few tutorials on this type of circuit and, with the hint above, trace their waveforms.

Not the answer you're looking for? Browse other questions tagged ac control triac load diac or ask your own question.