How can power be both inversely AND directly proportional to resistance?

Looking for more of a conceptual answer than a mathematical one.

I've made a couple of plots showing the two different cases. The X and Y axes are current and voltage, and I've also overlaid constant power curves (V=P/I) and constant resistance curves (V=R*I). 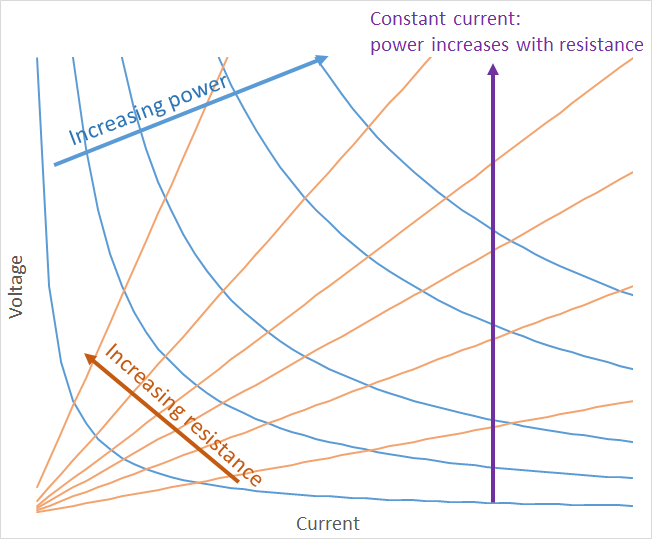 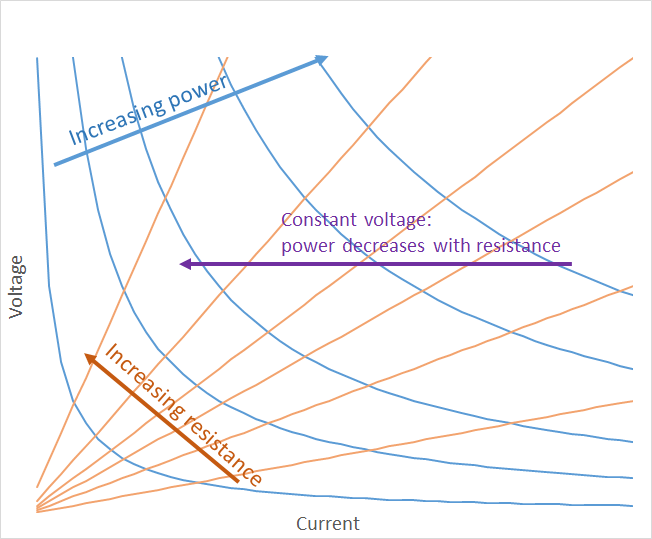 These are two totally different situations:

Since it is impossible to change the resistance and keep both the voltage and current constant, there's no conflict.

Power is \$P = IV\$. You can only relate it to resistance if you decided to fix one and replace the other by Ohm's law. Ohm's law states that voltage across a resistor is linearly proportional to the current flowing through it, or \$V = IR\$. This can be arranged to say that current is inversely proportional to voltage, or \$I = \frac{V}{R}\$.

Current sources are a bit difficult to visualize, but one way you can think of it is a variable voltage source which increases or decreases the voltage until the current flowing from it is the desired value. If you attach a small resistance, the source doesn't need to work very hard to get an amount of current flowing so little power is expended. If you attach a large resistance the source needs to work much harder to get the same current flowing, thus a lot of power is expended.

For \$P = I^2R\$ and on a voltage fed circuit (i.e. a battery and a resistor) if you doubled the resistance then current halves so no, it isn't so simple to just say power is proportional to resistance unless you are talking about a constant current circuit.

And, if you applied the \$P=\dfrac{V^2}{R}\$ formula to a circuit fed with a constant current you'd find that as you increased resistance, power would also increase.

You have to choose the most appropriate formula but, understanding what really happens means you can use either formula.

see there is no concept that R is directly proportion to P. according to equations P--I2R and P--V/R R seem to be directly proportional but that is not so R stands as an substitution and is constant it does not increase or decrease power it is just constant

hope it helped you

and removing the constant of resistivity

I think you're confusing power with work. Work is the amount of energy converted, for example resistance creates heat from pressure or voltage. This is a quantity of heat. Power is the speed at which this heat is created, or how fast.

Resistance of an object is neither energy spent or a period of time. So in and of itself, resistance has no relationship with work or with time interval. None of these units are compatible by themselves. It's like comparing the compressive strength of steel with the boiling point of water. They measure two completely different things. In and of themselves they have no relationship. However, you add a conditional component that both can share, and the comparative changes for each can can create a connection. For instance, add a variable component in the mix, like adding an electrical current to both the boiling water and the steel, then measuring the steel strength and the boiling point to see if that changes either one or both of their measurements. Now you have a comparison you can make, not to one another directly, but to how they both react to this new component.

Hope that this is a better conceptualization than just bouncing formulas around.

I can simply say that in the first equation P = V^2/R power is inversely proportional to R because it's in an parallel circuit remember that in a parallel circuit voltage is constant throughout. (And we have V in the equation) And in the second equation P=I^2R. P is directly proportional to R because it's in series circuit remember taht in a series circuit curret is constant..... (And we have I in the equation also) Hope it helps... :)

Not the answer you're looking for? Browse other questions tagged power resistance ohms-law or ask your own question.

1
Is higher or lower resistance wire able to heat up more? Are there other factors?