Resistance of an LED in a simple battery-resistor-LED circuit?

I have a simple circuit arrangement of a 9V battery - 1k Ohm resistor - LED. This circuit has a current of 7.5 mA (measured between the LED and the battery). If there's voltage drop of 2V in the LED, does it mean that my LED has a (2 % 7.5)k Ohm resistance?

Diodes are not ohmic. Resistors have a linear relationship between current and voltage. That is the relationship described by Ohm's law which you used in your question. Diodes look like this:

We normally model them as a simple voltage drop when they are forward biased and an open circuit when they are reverse biased. If more precision is desired, we sometimes model the forward biased state with a voltage drop and a resistance. However, what you have computed is not the same as this resistance. Your calculation fits a line between the origin and your present circuit's operating point, giving a much different number.

To say that your LED has that resistance is misleading as if you change the current, the voltage will not change proportionately.

You should not consider LEDs (and other diodes) as having resistance, as they do not obey Ohm's Law. The voltage across a lit LED varies only slightly as the current varies. It is best to say that an LED has a (nearly) fixed voltage drop, which varies with the colour of the LED.

Since resistance is defined as:

However, since an LED's Vf will stay fairly constant while its If varies since the LED isn't ohmic, its resistance won't remain constant, and its calculated resistance will only be valid at the particular Vf and If cited.

For example, if the LED you you were referring to developed a Vf of 2.1 volts with an If of 15 mA through it, then its resistance under those conditions would be:

which, as you can see, is quite different from the first case.

Following is an interesting plot of forward voltage and resistance as a function of forward current for a randomly picked (junkbox) 20 mA red LED.

The current through, and voltage dropped across the LED were measured, and the resistance was calculated as discussed earlier. 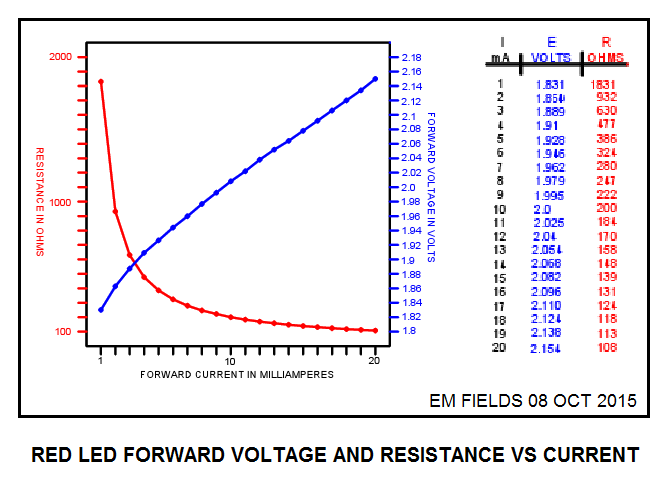 Since the resistor is 1000 ohms, the LED must be providing 200 ohms of resistance. As mentioned though, this value is not constant like a normal resistor.

Not the answer you're looking for? Browse other questions tagged led resistance or ask your own question.

3
how to drive a 1.35V led with a 1.4V AA battery
12
How do I calculate the resistor value for a simple LED circuit?
18
accounting for LED resistance
0
Different LED forward voltages depending on the order of the limiting resistor on Arduino
8
Why is my circuit's current far lower than expected with 2.6v / 220Ohm / and LED?
1
Current reading in a simple LED circuit
1
Measuring resistance
0
Is there a point in adding a 1 Ohm resistor to this LED circuit?
1
Parallel circuit with LED on one path and resistor on the other