How does this Op-Amp Circuit Work?

I am analyzing the schematic for an audio amp:

I am interested only in the top left op-amp (JP2 on the left) where it runs into the op-amp, pictured below. 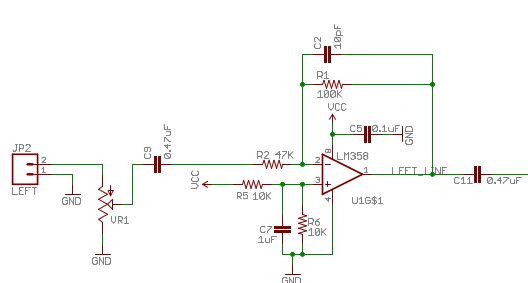 A few simple things that I don't understand.

C9 is placed in the audio input path to block the DC that would otherwise flow because of the DC bias (~\$V_{CC} / 2\$) that will develop on the inverting input. A capacitor passes AC current and blocks DC current. The size of the capacitor determines how much AC at what frequency will pass through, that's why C9 is large-ish.

\$V_\text{CC}\$ doesn't come into it here. It powers the op amp, but doesn't connect directly to the op amp output. The DC portion of it that develops on the inverting input is blocked by C9.

The output capacitor blocks the DC in the output.

Where \$f\$ is the frequency in Hertz (Hz) and \$C\$ is the capacitance in farads. 0.47uF seems a bit on the small side for low audio frequencies, so it might not have terrific low frequency response. The capacitor would have an impedance of ~17kΩ at 20Hz, for example, 1.7kΩ at 200Hz, etc. So about 1/3 of the input signal is dropped at 20Hz, about 1/30th at 200Hz. More may be dropped on the output depending on the impedance of the following stage.

The LM358 is a so-called "single supply" op amp, meaning it operates effectively with only a single voltage supply, \$V_{CC}\$ in this case. To do that, it "centers" the signal around half of the supply voltage. That's what the resistor divider on the non-inverting terminal is there for. So the output signal is AC superimposed on a DC value of say 6V for a 12V supply. That's why the output coupling capacitor is needed, to block the DC component, leaving only the amplified AC signal.

All three of your questions are related.

DC error/offset in the output is an inevitable effect of reality in most amplifiers. There are some designs (called DC servo designs) that have a feedback loop to cancel this output DC offset. This reduces the need for output capacitors in power amplifiers, but most of the authors I've read are pretty down on the idea as a practical solution to the offset problem.

A note on filtering: You're probably looking at this like an RC circuit, but at the frequencies we're looking at, the source impedance is low enough and the capacitance is high enough that the effect is minimal. Generally the larger the capacitor, the better the bass response and lower distortion.

For question 1&2: This intentional capacitor removie any DC off set of that input signal. This offset voltage may change the Q point of circuit which can cause unexpected values.Audio signal is mainly an oscillation which is not cancelled out through this capacitor (capacitor act as short circuit for small signal ac).

Q 3: What I understnad from the diagram, your VCC is higher then input. For op amp, if VCC is not hhigher,output will be lesser then what it should be and for electrical IC this also be true.

1
Audio amplifier coupling issue
13
Will this passive non inverting anti-log circuit work?
0
Help understanding the mixer of a superhetrodyne receiver
0
Purpose of components in op-amp radio circuit
2
How to analysis this Operational-Amplifier circuit?
2
Identifying function of passive components in op amp circuit
0
Shifting an audio signal from 0 - 4V to -2 - 2V
2
How does the Yamaha DX7 digital analog converter work?