Are too high capacitance capacitors "bad" for the circuit?

I am trying to learn basic circuitry and I've been looking into capacitors and their uses in different areas.

When looking at capacitance several different sources say that circuits might malfunction or burn with higher capacity capacitors than designed with. Unfortunately, but none of those sources go into detail.

How can a capacitor cause malfunction if capacitance increases? Wouldn't the capacitor simply take longer to fully charge? Can high capacitance capacitor really cause any sort of "burn"? I mean it cannot store or produce higher current than what is given by power supply, right?

Am I missing some important detail?

How can a capacitor cause malfunction if capacitance increases? Wouldn't the capacitor simply take longer to fully charge?

Capacitor is a charge reservoir. Switched-mode power supplies need to charge it first. Too large capacitors might make the internal power supply loop go unstable, which would create large voltage deviations across the capacitor and potentially burn it due to too large capacitor heating caused by its non-zero parasitic resistance called "ESR".

Can high capacitance capacitor really cause any sort of "burn"? I mean it cannot store or produce higher current than what is given by power supply, right?

The typical way to mitigate this issue is to use multiple parallel caps (splitting the ripple currents) or using higher quality capacitors. These methods, however, tend to increase cost of the final product. The electronics industry is very cutthroat nowadays, which gives rise to designing for full functionality and reasonable failure rate but not a bit more.

I'll limit my answer/addition to "burn" type failures, because otherwise there's really a mile-long list of circuits that can malfunction (any high-pass filter, any feedback loop etc.) and depending what they control stuff might burn/blow up. The example that SunnyBoyNY gave with the SMPS output cap is actually an example of feedback loop. More modestly, any opamp can (and will) oscillate with a big/right capacitance on its output; and when it does so it will heat up. Unless it has thermal protection/shutdown, it may get damaged. In all these cases it's the reduction in phase margin by the [increased] cap that's causing a problem. I won't get into details on this, because LTI control theory is almost certainly too difficult to grasp [right away] by someone wondering about this too-big-capacitor-damage issue.

However, even in a linear power supply, a capacitor that's oversized relative to the rectifier (diode) can lead to failure of the rectifier via increased peak [charging] current. Below is a textbook illustration of the problem (for a half-wave rectifier with capacitive filter): 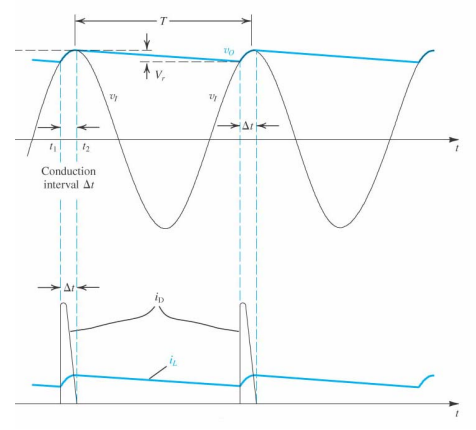 The smoother the filtered voltage gets (less ripple), the smoother the load current gets, but the same energy is transferred to the capacitor over a shorter period of time (conduction interval) so the diode sees a higher repetitive peak/surge current when the capacitor is increased. Actually this is just a repetitive version of the worst-case scenario, which is the inrush current when the capacitor is completely discharged (in which case the peak will actually be much higher), but it's worth noting that diodes have different/lower current ratings for repetitive stress vs "non-repetitive" events (which is a bit of a misnomer, such events can repeat just nowhere near the mains' frequency; this appnote is good read for diode-spec jargon.)

A less obvious variation [because it doesn't involve things sold as capacitors] of this inrush current issue is the gate capacitance of a MOSFET. Make it too big [say, by changing/upping the MOSFET model so it can switch a bigger load] and the gate inrush current can damage an IO pin of a microcontroller...; avoiding such a scenario is one of the [many] reasons why MOSFET driver circuitry can get complicated.

Finally, the problems mentioned are not insurmountable. One can compensate feedback loops (one way of doing that is actually by adding/increasing capacitor[s], but in a different part of the circuit). As for limiting inrush current (directly) there are numerous solutions, the most obvious being adding an inductor.

Aluminum capacitors, which are normally cheap and have higher capacity, are also not reliable. They have working lifetime of thousands of hours. If you look at them, you can even see that they are prepared for explosion:

See those cuts? They will open wide and direct the explosion to the top, saving rest of the board.

Your posting question does not specify which part of your circuit the capacitor is in nor what supplies it. Take for example a fat car battery supplying your circuit with 12V through 1mm^2 copper wires. Suppose that the input of your circuit has a 100,000 microFarads of big fat capacitor there, what length of supply wire would be less than 0.05 ohms so go to 120 Amps when first connected?

Don't try that at home. To design a circuit which is safe and does have a huge input capacitance, you need to set up some extra switching near to the input end so that you can fill up the big input capacitor more gradually through a modest resistance and not draw power to your main circuit until you've charged the input C and bolted down the wires.

At the other end of your circuit, suppose that you have a HF transformer rectified into an output smoothing capacitor. After doing the safe start, that unit could have 12 Volts 10 Amps going into it. After ten seconds, that has received 1200 Joules, so if it has an output capacitor, it could have stored plenty enough to kill you or start a fire. Burns are an underestimate; it is possible to get much more current and much more voltage out of an unspecified circuit (would that, by any chance, contain a car ignition coil?) and a big industrial capacitor than the original car battery supplied.

Not the answer you're looking for? Browse other questions tagged capacitor capacitance or ask your own question.

-4
Capacitors when to not use on linear voltage

10
How can a capacitor store charge whilst also passing current?
1
Is the value of XTAL load capacitors for ATmega328p @ 16MHz critical?
8
ESR and parallel capacitors
1
Testing Capacitors - Differing Results Each Time One Is Tested?
2
Replacing capacitors in a power supply circuit
18
How to Measure Very Large Capacitance e.g. Super/Ultra Capacitors
0
Calculating Capacitance / Rolloff Frequency for Across the Line RFI Supression
1
Does the Arduino Capacitive Sensing Library fully charge/discharge the "capacitor"?
0
Can you use an inductor as a capacitor for high frequencies?