What is ALC on a preamp?

I have a preamp rescued from an old stereo: BA3308

It has a pin "ALC" and the data sheet keeps going on about how splendid this ALC is and how it has a built-in ALC diode and such.

Nowhere does it tell you what ALC is, or how you should use this ALC pin.

I have looked for meanings of ALC online, and I have found 2 possible meanings that would fit this device:

There may be others...

What is it? How should I connect it? is it an input, or an output? It's a major feature of this chip, and I guess it's assumed you know what it is as you chose the chip.

If you look at the datasheet, there is an example application circuit: 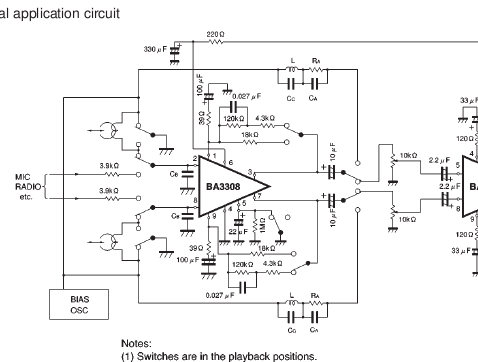 Notice how the amplifier is used for amplifying for both recording and playback. The same tape head is also used for both functions.

ALC (automatic level control) was an important function in tape recorders, as the signal had to be the right level, strong enough to overcome noise but not too high to cause saturation. A variable-gain amplifier is a bit tricky to do without distortion, so having it integrated into the preamplifier was a convenience for the system designer.

I don't know what you plan to do with the part, but an obvious choice would be an audio compressor. It won't be super high-fidelity, but maybe good enough for a guitar stomp box.

If they talk all the time about ALC, and fail to explain what it is, all I can say then is that the datasheet stinks.

The application example on page 3 gives us some idea. The ALC signal is taken from the output, via a diode and an external capacitor. That means it's a peak detector, whose level is then used to control the amplifier's amplification. So that looks very much like Automatic Level Control, though Audio Limiter Control is a close relative, if not exactly the same.

As the manufacturer says in this tech note, ALC means Automatic Level Control. There's a block diagram that looks like the ALC picks up the output signal and uses it to adjust integrated potentiometers at the input pins of the forward path.

It looks like the IC is intended to be used with cassette tape recorders. Cheapo recorders often don't have a potentiometer where one can set the recording level. Instead, an circuit tries to adjust the level of the signal that is to be recorded such that it is neither too silent and vanishes in the tape noise, nor too loud so it would cause tape saturation (distortion).

The text next to Fig. 15 explains how to use the feature. Basically, there's an RC combination that allows you to set how fast the IC will react to varying levels of the signal.

See this one: AGC- Automatic Gain Control It mean variable dB on amplifying.

Not the answer you're looking for? Browse other questions tagged preamp or ask your own question.